FARM FIRE: DEAN HASSETT PRAISES FIREFIGHTERS AND NEIGHBOURS — ‘Thanks for your help’ 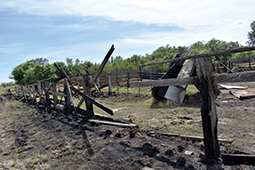 Driving home after grocery shopping in Maple Creek, Dean Hassett saw no clues to the sight about to greet him.
As the 88-year-old navigated the gravel road towards Hassett Farm — where his grandfather once lived, a few kilometres east of town — the sky was fairly clear. It seemed like just another summer afternoon ­— plenty of sun, blue sky, and a bit of wind.
Turning into the farm, however, he was shocked to see his yard consumed in smoke and fire.
He began tramping desperately on flames, but it was no use — the fire was too widespread and seemingly out of control. There was a clear danger of flames, fanned by the breeze, attacking hundreds of nearby trees he had planted. This would, in turn, threaten the outbuildings, including his big red barn, not to mention his house.
Hassett ran for his tractor with a front-loader, thinking this would give him a better chance of beating back the fire.
At about this time, a neighbour, Peter Dowkes, arrived with a 500-gallon water truck. Immediately spotting the danger, Dowkes concentrated his efforts on defending the trees.
“He stopped the fire from spreading and saved the buildings,” said Hassett.
Others also arrived at the scene, including the Maple Creek Community Fire Department, which controlled the blaze and eventually put it out.
Even after the fire trucks had left, Hassett could not relax.
He got up several times during the night to check for sparks or hot spots, but found nothing.
It made him thankful for the professionalism of the firefighters.
Blaine Becker, Maple Creek fire chief, said the cause of the July 14 blaze had not yet been determined.

There was speculation underground wiring might be to blame, but no evidence had been discovered to support this, he added.
Last week, the News-Times visited the scene — wooden fencing was broken and charred, a shed in the middle of the corral was crumpled and blackened, and there was still a faint tang of burning in the air. The soil had a scorched appearance; there were little patches of green and tufts of yellow grass.
Hassett went to the Maple Creek News-Times last Thursday to hand in a letter praising everyone who had helped prevent a major fire.
“Thank you to all the wonderful helpers who made arrangements and others who helped fight the fire, bringing tractors, water trucks with lots of water,” he wrote.
“After all the wonderful professionals had put the fire out and left, I checked a few hours all night and could see the fellows sure know how to do a good job, as I didn’t see a spark or red hot spot.”
Hassett said Dan Sellinger, his son-in-law, brought a tank of water over and left it by his tractor.
“He told me to phone him if I did see a hot spot,” the letter added.
Hassett, who was brought up in Brooks, Alberta, has lived at the farm since his marriage to Yvonne ­— a long time ago, he said.
He once raised cattle, but has sold them. Nowadays, the corral isn’t used for much. The broken-down shed provided, among other things, storage for salt for cattle.
In his younger days, Hassett was a keen sportsperson, excelling at hockey, golf, and boxing. His interest in boxing was evident in his letter, when he likened it to combating the fire.
“Dean and Yvonne Hassett, Dan and Dana Sellinger give our thanks to you people who fought and won what could have been a bad fight,” he wrote, adding: “Peter Dowkes was the first helper that drove in with a truck of water and who stopped the fire trying to jump the road allowance into trees and getting into our other three shops and building.
“A special thanks to all helpers from Dean and Yvonne Hassett and Dan And Dana Sellinger.”