WE NEED A POOL 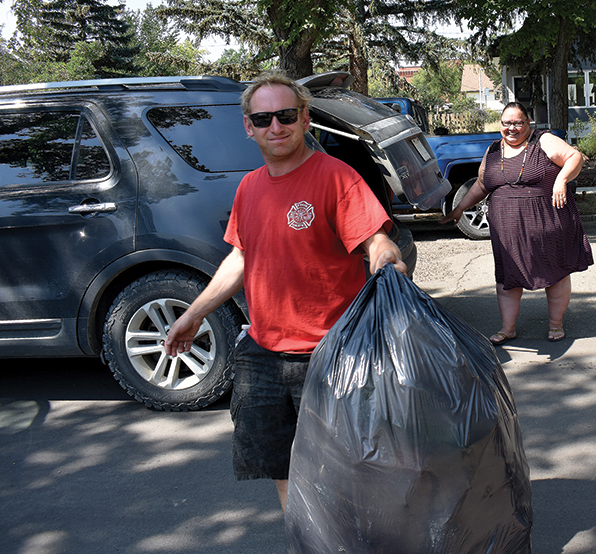 Just how much does Maple Creek want a new swimming pool?
The answer was roared out on Saturday through three bumper fundraisers that left organizers amazed by the display of spirit and goodwill:
• A month-long online auction ended with more than $115,000;
• A bottle drive attracted a huge response from every corner of the community; and
• Mama T’s Catering & Events raised $2,238.60 — $1,635 through burger sales, and $603.60 from tips.
Maple Creek Swimming Pool Fundraisers — the newly named fund-raising group — was thrilled with the success of the ventures.
“The support from our community has been incredible,” Isaac and Corrine Collura said in a Facebook post about the auction, which ended at 2 p.m. on Saturday.

“Many thanks to each one of you who have participated. What an amazing community to be a part of!”
The couple said auction items brought in $66,563, while donations came to $48,640, adding up to a total of $115,203.
“Wow, you are all amazing and every bit has been so appreciated! Let’s get our town a pool.”
The bottle drive was masterminded by Colten Sustrate and Kristin Weiss.
It began with a 9 a.m. meeting at the Legion parking lot.
As if engaging in a military-style operation, volunteers were divided into teams that fanned out across the area, each responsible for a particular district.
The action then switched to 306 Harder Street, a former church bought by Isaac and Corrine Collura.
It was here, in the yard, people of all ages got busy with sorting and bagging hundreds — no, thousands — of bottles and cans. These were carried to a room, where a pile of recyclables grew into a 10-ft mountain — perhaps the biggest of its kind ever seen in Maple Creek.
For eight-year-old Coven Graham, one of the younger volunteers, it meant carrying trash bags that were almost as big as herself.
Colten, a lifeguard at the old pool for five years, was overwhelmed by such a demonstration of community spirit.
“It’s been absolutely crazy,” he said, estimating up to 50 or 60 people had come out to help. “We’ve been spreading the word through Facebook and word of mouth.”
How much was he hoping to raise?
“Between 10,000 and 15,000 dollars — that’s my target,” he said.
The final amount won’t be known, of course, until the bottles and cans are taken to Sarcan in a few days.
Kristy McKinnon, who has been spearheading the fundraising committee, praised Colten and Kristin for an, “awesome job.”
“Thank you to each and every one of you who came out to help and are out helping right now,” she said, on the group’s Facebook page.
“What a great turnout and support! Thank you also to the Maple Creek Fire Department for all their help. What a great community.”
McKinnon said those who had missed the drive can still take recyclables to Sarcan and request proceeds go to the pool fund.
Among those who spent the morning collecting bags were Pastor Ross Pollock and his wife Claire, from the Cowboy Church.
Claire said the blistering heat over the last few weeks underlined why Maple Creek needed to have a pool.
“Our kids also need to know how to swim,” she said. “It is a very important life skill.”
As a child, Claire was taught to swim by her elder brother, Norris Bick, a lifeguard and manager at the town’s old swimming pool, now the site of the Seniors’ Centre. It was a lesson that enriched her life.
“A pool is also a big draw for tourism,” she said. “If you’ve got children, why move to a town that doesn’t have a pool?”
As the bottle sorting operation continued, Mama T’s, in its usual spot off Highway 21, south of Maple Creek, was selling $5 meals — a burger, can of pop, and a small bag of chips. All proceeds went to the pool fund.
It was a team effort. Tonie Shea and Ken White cooked the burgers, while Tracy Walkow, Faith Ann Wong, and Tonie’s daughter, Hailee, served customers from beneath an awning in front of the trailer.
In the first three hours, an estimated 200 burgers had been sold. Burgers were also delivered to 306 Harder Street to feed hungry sorters.
Ken explained his reasons for wanting a pool.
“I have six grandchildren that need a place to swim,” he said.
This summer, he added, his grandchildren went to the Splash Park or used sprinklers. Sometimes they travelled to Medicine Hat.
Tonie said Mama T’s had wanted to do something to “give back to the community.”
She said the response to Saturday’s fundraisers amounted to a community “outcry that we need a pool.”