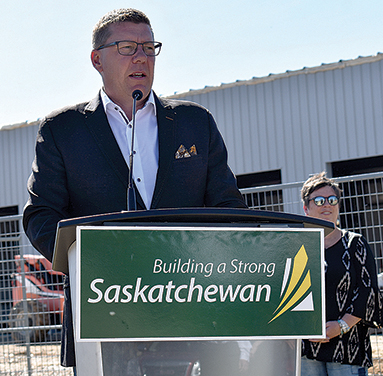 Saskatchewan Premier Scott Moe paid a visit to Maple Creek last week to celebrate the Municipal Economic Enhancement Program or MEEP funding for the collaborative new fire hall build.
“It’s a wonderful time of year, second only to spring when everything is green, vibrant, and growing,” Moe noted, as he discussed a plethora of topics, which included COVID-19, employment, health care, education, and the harvest.
“The second most important time of year, arguably the most important time, is when that crop comes off in our Saskatchewan harvest,” he added.
According to Moe, a Canada-wide employment report was recently released. In August, Saskatchewan added 4,700 jobs, according to the report.
“Our unemployment rate has dropped to 7.9 per cent — that’s the lowest unemployment rate of any province in the nation. Far below the national average, which is just over 10 per cent. This is a positive on the economic recovery in our province. And thank goodness for agriculture,” said Moe.
Moe explained the plan moving forward, with respect to COVID-19 today and tomorrow, is really similar to what the government and individuals have already been doing.
“Our collective success in the province is due to what each of us, as individuals, is doing and the way we are physical distancing and being careful. If you can’t have that distance, have a mask handy. I carry a mask with me at all times. It has shown to work.
“Our numbers are low, relative to other areas in the nation. It is my hope they will continue to be low,” said Moe.
Moe said the government has had many discussions prior to the re-opening of sectors across the province. The latest re-opened sector being the province’s schools. “I understand there’s been a very active conversation around re-opening those schools, but we had a very similar conversation when we re-opened retail sectors of our economy a number of months ago and when we re-opened cultural and recreational sectors of our economy more recently.”
A recent announcement was made for a $51 million investment going to school divisions for programs and opportunities to ensure classrooms are safe. This is part of a $155 million “pot of funds” supplied by the provincial government, school divisions, or from the federal government.
“There was $40 million available in savings from the school divisions’ closures last spring,” Moe said. “We didn’t ask for those dollars to be returned. We ensured those dollars stayed within the school division, so they could use for a one-time cost to address COVID.”
According to Moe, $40 million was then added to those funds from the provincial government — from its contingency fund. And now, more recently, an additional $74 million has been added from the federal government’s re-start agreement, which came from negotiations with the Council of the Federation.
“Over $150 million was made available. The school divisions are working through their savings they had to ensure they have the supplies in place — sanitary supplies and janitorial supplies to ensure our classrooms are safe. That was added to the $51 million announced,” Moe said.
There will also be more funds coming through the pipeline in the coming months to ensure classrooms and children are safe, Moe added.
Economic recovery is also a part of the plan in the province and across the country.
“We need to be able to discuss both how we are going to ensure our numbers remain low (of COVID-19 cases) and how we are going to recover our economy. In Saskatchewan, we are in a very good place, when it comes to economic recovery,” Moe said.
First of all, Moe continued, the province saw more people work throughout the pandemic and during the province’s response. He pointed out more than 80 per cent of Saskatchewan residents were able to continue working throughout the response to the COVID-19 pandemic.
Second, Moe said, the province is recovering quicker — from a people getting back to work perspective. “We are not pre-pandemic levels, but we’re well on our way.”
Saskatchewan, Moe said, has the lowest unemployment rate in Canada. “When you look at the economic drivers in the province — we have the products the world will need to recover.” Those products include food, fuel, fertilizer, and uranium.
“We have a great opportunity, as we slowly find ourselves understanding this virus more and finding ourselves on the backside of this pandemic. As the world recovers, Saskatchewan certainly has what the world needs to recover. We’re starting to have very active discussions about how we best place our industries, our province, and our communities for a strong recovery — not only back to pre-COVID levels, but continue to grow again,” Moe said.
With respect to health care in the province, Moe said the government injected millions of dollars earlier this year to ensure funds were made available — to not only approach the pandemic, but to have the funds necessary to re-engage the health care system.
“We are running — not quite at 100 per cent capacity.” But, Moe added, health care is running at quite an appropriate level Saskatchewan residents would expect.