‘To be useful, with a pleasant degree of humour’ — Popular farmer’s almanac in its consecutive 229th year 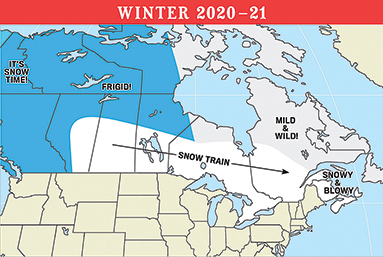 Historically, humans have been fascinated with the weather. From utilizing weather forecasts to assist with the growing of each year’s bounty to using the weather as a typical conversation starter — current or future weather situations continue to connect us.
Canadians usually get their weather reports from local newspapers, radio, television, or online. Predicting the weather has always been big business, and it would seem, one of North America’s favourite obsessions
Punxsutawney, Pennsylvania has Phil, its resident groundhog. Balzac, Alberta has Billy, its “Prairie Prognosticator,” and North America has its very own popular publication — dedicated to all things weather-related and then some.
With a touted “80 per cent accurate weather forecasts” — “The 2021 Old Farmer’s Almanac,” now in its 229th consecutive year, is now available. The latest opus calls for frigid and frosty temperatures throughout most of Canada this winter.
“Areas from Alberta eastward to Quebec should brace for a virtually continual ‘Snow Train’ that will be carrying a series of winter storms throughout the season,” it was stated in a recent media release, to announce the 2021 Canadian edition, which is in its 39th year. The compilation is available to purchase locally wherever books and magazines are sold. It’s also available online through Amazon.ca for at-home delivery, or at almanac.ca.
Jack Burnett is the Canadian edition’s managing editor. “The Old Farmer’s Almanac,” Burnett noted, is the oldest continuously published periodical in North America and was founded in 1792 by Robert B. Thomas.
“Back in those days, there were many farmers’ almanacs — particularly along the East Coast of the United States and in what was to become Atlantic Canada,” Barnett noted.
If somebody had an interest in mathematics, astronomy, weather, and in the smell of printer’s ink at a print shop — those inclined, would believe they could make a buck or a pound by producing an almanac, Barnett explained. “They would do their calculations for the tides and for the astronomical data, and they would also include many other things, including weather forecasts.” The first edition sold for a mere six cents or six pounds.
Back then, Barnett added, climatology or long-term weather trends in an area were used to predict the weather.
“In 1792, they didn’t have anywhere near the amount of data we have now. It was just talking with travellers and reading old accounts,” he said, including the science of the air (or what we now call meteorology, and the effects of localized topography, lakes, mountains, how winds would blow, and solar radiation through looking at sunspots
Thomas started making forecasts and they proved to be pretty darn accurate, Barnett pointed out. “Eventually, over time, the quality of his almanac really improved and stood out.”
Barnett said Thomas had a goal, “To be useful, with a pleasant degree of humour.”
“He also started a tradition, that continues to this day, of really being in touch with the readers. He took every reader seriously, because back in those days, you really had to.”
According to Barnett, the first print run of the original almanac was 3,000, which continued to grow in numbers. The special Canadian edition started in 1982. There’s also an almanac for kids too.
So, enough about the almanac’s history! What’s in store, weather-wise, for Maple Creek and area?
“For September and October, we’re actually looking for it to be slightly warmer than normal,” Barnett said. “Or not quite so cold, as normal. With average precipitation.”
For the meteorological winter, or November through March, it will be colder with more precipitation — or more snow is forecasted.
“We see a progression of snow storms starting in Alberta, coming through Maple Creek, heading for Winnipeg, and points east,” Barnett continued.
“For Maple Creek and the prairies, we see the really cold parts of the winter to be almost all in December except the third week,” Barnett said, which includes the very last part of January and February.
“Not that it’s not going to be cold other times,” Barnett added.
As far as snow goes, Barnett said, the forecast calls for three doses — the last week of December, the middle of February, and the last week of February into the first week of March.
Barnett said readers can also go online to check out almanac.ca — which is a massive website, with free pages of information. Topics include food, gardening, astronomy, weather, history, and humour.
“It’s just like ‘The Old Farmer’s Almanac’ print edition in what it covers,” said Barnett. “Which is why people buy it.”