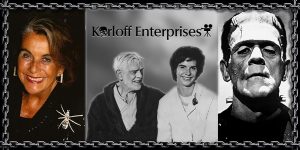 Recognized as one of the true icons of terror cinema, Boris Karloff (William Henry Pratt) was born in England in 1887.
Closely identified with the general public’s perception of the “monster” from the classic Mary Shelly masterpiece “Frankenstein,” Karloff was featured in over 160 classic films and is the unforgettable and legendary voice of the “Grinch” from the beloved Dr. Seuss 1966 television holiday special, “How the Grinch Stole Christmas.”
Did you know Pratt travelled to Canada in 1909 and joined a touring company based out of Ontario and adopted the stage name of “Boris Karloff”?
Karloff was cast as the “monster” in Universal’s James Whale-directed “Frankenstein” in 1931, as undead Im-Ho-Tep in “The Mummy” in 1932, and he donned the signature make-up, neck bolts, and asphalt spreader’s boots again in “Bride of Frankenstein” in 1935, and in “Son of Frankenstein” in 1939.
Karloff also starred in a plethora of films including “Charlie Chan at the Opera,” as a crazed scientist surrounded by vampires and werewolves in “House of Frankenstein,” and appeared in a few Abbott and Costello monster movies. In the 1960s, Karloff experienced something of a revival on TV with the anthology series “Thriller.” He was also featured on radio, Broadway, and his larger-than-life voice could be heard on a variety of children’s recordings.
Sara, Karloff’s only child, said it falls to her to protect her father’s legacy. “I’m delighted to do so. The fans are absolutely wonderful worldwide. They pay such respect to his memory, to his work, and to his persona. They’re just so loving, and so interested in maintaining the long legs his legacy has. They are certainly much better-informed about his work than I could ever become.”
“And very protective of his outstanding reputation, both as a human being and as a professional in the entertainment field,” Sara added.
Sara believes her father’s work was outstanding, varied, and his work on the original “Frankenstein” was one-of-a-kind.
“It broke through many frontiers. Mary Shelly’s work, of course, posed many questions, as did the film — scientific questions, religious questions, sociological questions, and philosophical questions. I think that, plus the brilliant direction of James Whale and the absolutely brilliant make-up of Jack Pierce and the interpretation my father gave to the role — all of that put together — made a film that is certainly one of very few classic films. It always makes the list of one of the ‘100 Greatest Films Ever Made.’ It’s iconic in many, many ways.”
Fast fact, Boris Karloff didn’t like the word “horror.” He preferred the word, “terror.”
Sara noted she’s been very fortunate to be invited to conventions and conferences over the years to speak about her father. “Of course it has nothing to do with me, I’m nothing but a conduit for people who wished they had an opportunity to meet my father and ask him questions.”
“I show home movies. I have some brief footage taken on the set of ‘Son of Frankenstein’ — which is believed to be some of the only colour footage of my father in the Frankenstein make-up,” she said. “I show my father at home. At one time my parents had 22 dogs in Beverly Hills. It shows him with the dogs, it shows him with me, and it shows him with my mother. It shows him as the man he was offset, which could not have been more different than some of the roles he played. My father was British and he was a very well-educated man.”
He was very articulate, and very well-read, Sara pointed out. And, she added, he was the antithesis of the roles he played. “People like to see the other side of the coin and that’s what the home movies show.”
According to Sara, she also shows some wonderful interviews of her father, which shows Karloff’s lovely British sense of humour. “Where he very often turns his humour back on himself. He was a very modest and self-effacing man.”
At the conventions and conferences, Sara said, there are also Q and A sessions too — where the audience can ask questions about her father, his films, and the making of the movies. “I learn something at every single convention to which I am invited. It’s just wonderful.”
Fans ask questions like what was it like at your house on Halloween, how long did it take your father to put the make-up on, and what was your father’s true relationship with Bela Lugosi? Lugosi played the original Count Dracula in the Universal Monsters classic. *(Check out a feature story on Lugosi in the Oct. 27 issue of the Advance Times).
Boris Karloff passed away in 1969. In total, he was featured in 167 films, won a Grammy Award for his work on the “Grinch,” and recorded 20 children’s fairy tales. Karloff loved Broadway, and he was a founding member of the Screen Actors Guild.
“His card number was number nine. There were 12 founding members. He felt it was extremely important for up-and-coming actors to have a vehicle by which they had a voice and could gain some protection — as far as working hours and conditions,” Sara said.
When Karloff made “Frankenstein” — which was actually Karloff’s 81st film, Sara noted her father often joked no one saw his first 80 films — “he lost 25 pounds during the making of the movie, because of the working conditions.”
Sara wishes readers a “Happy Halloween.”