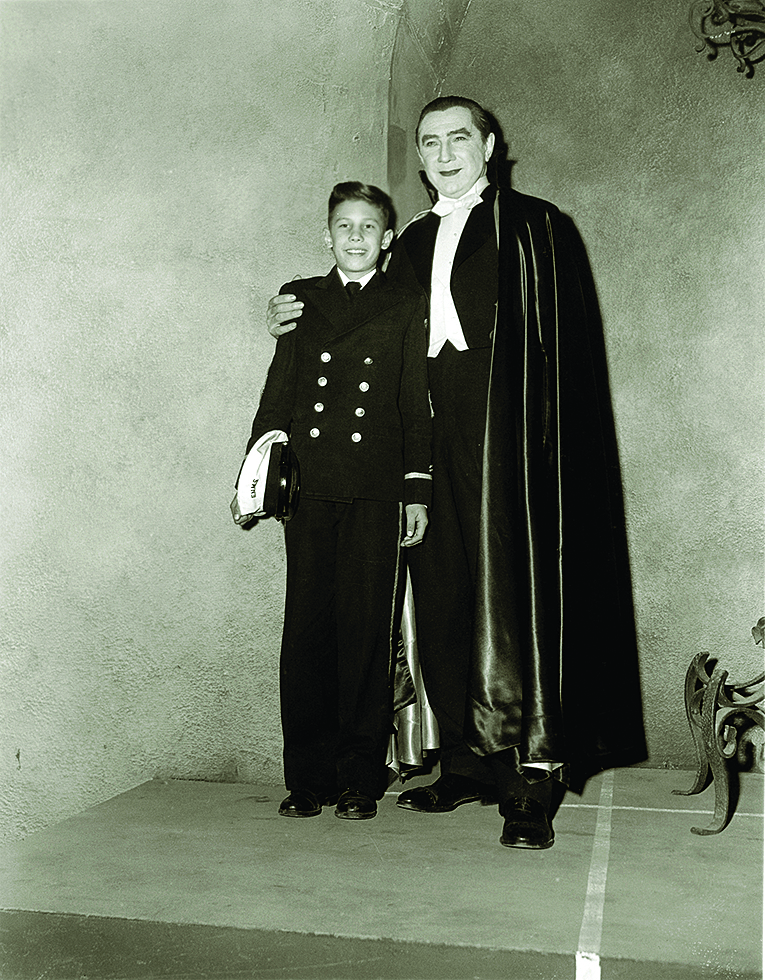 “As a disciplinary tool, all dad had to do was give me that famous stare,” stated Bela Lugosi Jr., son of the icon that will forever be Dracula — Bela Lugosi.
With 113 feature films and shorts, roles in hundreds of stage performances, and numerous radio broadcasts and public appearances — Bela Lugosi was a true American film/entertainment pioneer.
Born in Hungary October 1882, Lugosi’s birthplace was located near what was the western border of the Transylvanian Alps. Lugosi passed away at his home in Los Angeles, CA in 1956. He was buried in one of his Dracula capes in Culver City, CA. Did you know Lugosi never wore fangs in his performances as Count Dracula?
Lugosi, according to his official bio, was forced to flee Hungary in 1919 during political unrest and never returned to his birth country. He found his way to America, and became a United States citizen.
Lugosi created his unique characterization of Count Dracula on the Broadway stage in 1927 and brought it to the screen in 1931. The make-up, style of dress, mannerisms, along with his distinct accent — this became the characterization for which he is famous. When cast in Universal’s film version, he brought his portrayal to the screen. He was also one of the first members of the Screen Actors Guild in the U.S.
Lugosi made 18 films at Universal Studios. Did you know Lugosi and Boris Karloff (who appeared as the Frankenstein monster) appear together in eight films?
“They had a friendly professional relationship, but did not socialize off-set,” it was stated in Lugosi’s bio.
In his 50-year career, Lugosi played a vampire on film four times and only twice as Count Dracula (in 1931 and in “Abbott and Costello Meet Frankenstein” in 1948). Lugosi was also honoured by the U.S. Postal Service with a commemorative postage stamp, as part of a set of five stamps celebrating “Famous Movie Monsters” issued on Sept. 30, 1997.
Bela Jr., born in 1938, was the only child of Lugosi and is the managing member of Lugosi LLC (which preserves and celebrates the legacy and life of his father).
Bela Jr. practised law in Los Angeles for 52 years before retiring in 2016. In 1963, he brought a historic suit against Universal Studios (Lugosi versus Universal), which paved the way for the California Celebrity Rights Act enacted in 1984. With the establishment of that Act, Bela Lugosi’s name and likeness became his lawful, descendible property right — one which Bela Jr. continues to protect.
Bela Jr. said his dad encouraged him to have a profession and avoid being an actor, “because he believed actors were too dependent on producers and agents.”
“His persona was so melded with the character of Dracula, he’s become immortal in that position,” Bela Jr. said. “And really an icon and a pioneer in the horror genre.”
According to Bela Jr., Lugosi LLC has a multi-faceted program to keep Bela Lugosi’s memory alive with merchandise licensing to interviews and appearances. “We go to conventions. We answer fan mail. We have a good fan base — very supportive of our efforts.”
Lugosi’s popularity and the immortality of the character just came about, really — said Bela Jr.
“I don’t think there were any creative plans of my dad saying ‘I’m going to become immortal with this part.’ He was a unique actor. The performance he did in the 1931 movie, it has become on its own, a symbolic performance,” Bela Jr. pointed out.
At conventions or appearances one of the most popular questions Bela Jr. is asked by his father’s fans is — what was it like living with Bela Lugosi and having him as a father?
“As time went by, I realized more and more, how well-received his performance has gotten to be,” Bela Jr. said. “If I could go back in time there would be a lot of questions I would ask him and I’ll never know the answer because he passed away,” Bela Jr. added.