In the Snow Lane! 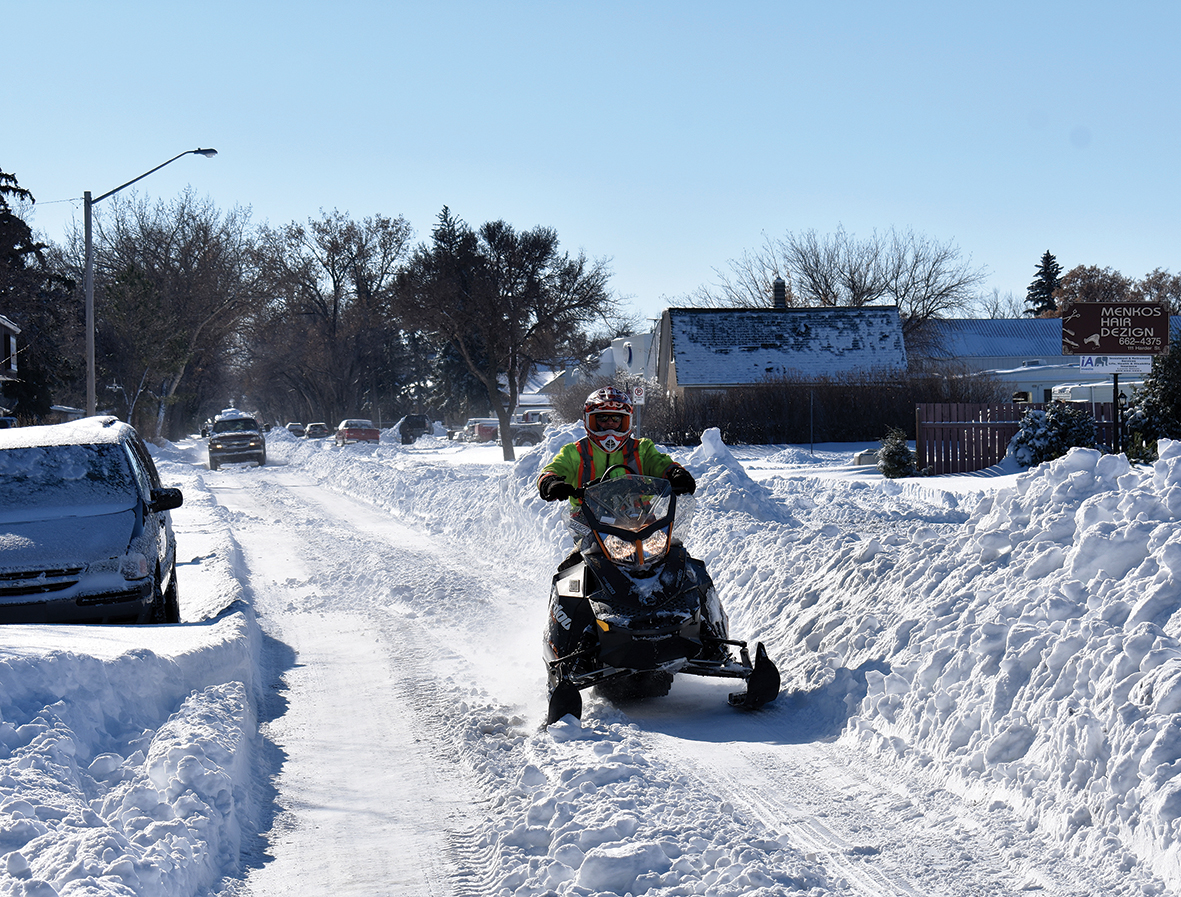 Snowdrifts many feet deep. Roads resembling wind-sculpted dunes. Cars buried, some abandoned. Rooftops covered. Trees decorated with white crystals …
Has a storm ever dumped so much snow on Maple Creek in such a short time?
The blizzard that started on Saturday evening, raged through Sunday and only faded in the early hours of Monday has tested the memories of residents, with some saying it is the worst they have experienced. Those with very long memories have to go back decades for a comparable snowstorm.
Blaine Filthaut, who runs the Broken Spoke Fine Art Gallery, grew up in Maple Creek.

After leaving the area, he returned in 2010, from Florida.
“It’s definitely the worst storm since I’ve been back,” he said. “I suppose it’s part of living in the Prairies.”
As a child, Filthaut lived near the building now known as Cortech, off 1st Avenue. It used to be a skating rink. Nearby, was a curling rink and the old swimming pool, which is where the Senior Citizens Centre now sits.
“I remember we had a similar amount of snow in one day,” said Filthaut. “I was in Grade 1 or 2 at the time, so it must have been in the winter of 1959 or 1960. There were two or three storm days and we had a humungous amount of snow. Then there was a Chinook wind and the temperature soared to 70 degrees and the snow all melted.”
Filthaut said in those days there were a lot of ditches in Maple Creek, but not many drain pipes.
“The ditches were four or five-feet deep, and would get full of water,” he recalled. “It was great for children because we used to float ‘boats’ on the water.”
With the snow melting from the Chinook after that storm 60 or so years ago, there was plenty of opportunity for playing with “boats.”
Mardi Yarshenko’s memory doesn’t stretch nearly as far back.
An employee at Hill Country Clothing, she grew up in Maple Creek and now lives on a ranch out of town. Sunday’s blizzard provided plenty of challenges, forcing her to battle through heaps of snow to reach her animals.
“It was pretty crazy,” she said. “Sometimes I was up to my hips in snow. It depended on which way the wind blew.”
Yarshenko also did some shovelling for her grandpa.
Has she ever experienced a snowstorm this bad?
She has a hazy recollection of a New Year’s Day storm as a child, but not much more than that.
For Gabriel Chudleigh the weekend wintry blast was a reminder of what prairie life can be like.
Chudleigh recently returned to Maple Creek after spending about two years in Ecuador, a country generally blessed by mild temperatures year-round, although, of course, it gets cold in the mountains.
When the COVID-19 pandemic struck, Chudleigh was living under a severe lockdown in the Intaq Valley.
Back in Maple Creek, Chudleigh has quickly found her feet, moving into an apartment above the Thrift Store, where she works part-time. She also has a job at Northern Lights Vintage Spa.
As the wind pounded Pacific Avenue on Sunday, Chudleigh spent part of the day knitting, painting, cooking, baking, and dealing with snow that forced its way underneath her porch door.
“I had to shovel the snow back — either that or stay at home,” she said.
Outside, she noticed how the storm created a wind tunnel between the Thrift Store and a neighbouring building.
The howling gusts and piles of snow provided dramatic material for a video filmed for her friends in Ecuador.
“Just as people in Canada don’t know about life in Ecuador, people in Ecuador don’t know about life in Canada,” she said.
Shelley O’Hare and Kathy Schneider, who run Northern Lights Vintage Spa on Jasper Street, have lived in Maple Creek many years, although both hail originally from outside the area.
Neither has experienced such a ferocious storm in Maple Creek before.
They decided to call Monday a “snow day” and shut up shop. “I got to stay home and watch the lovely snowfall,” said Schneider.
“We were pretty much snowed in.”