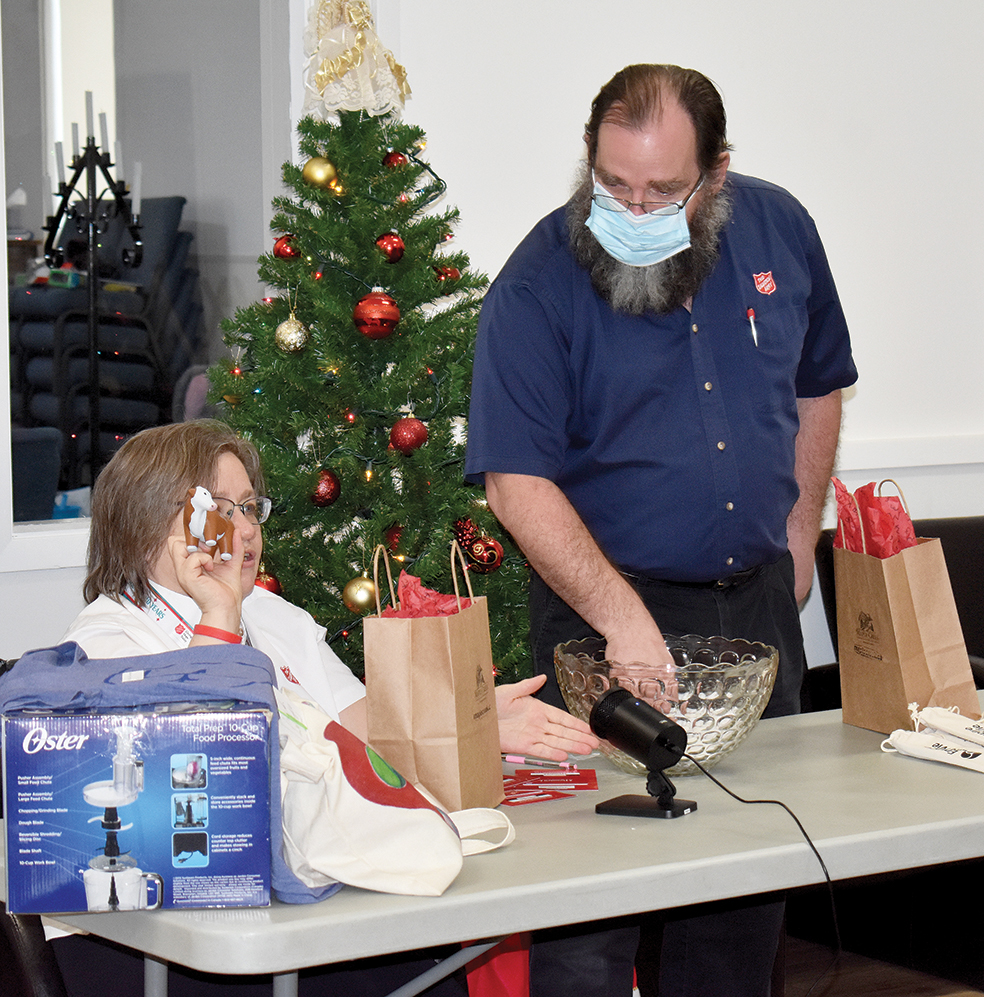 It was a Santa Shuffle with a difference.
At various times over eight days, people of all ages took part in a five-kilometre Fun Run or one-kilometre Elf Walk around Maple Creek.
They went solo or in teams, often lighting up streets with their festive attire and holiday humour. There were plenty of Santa outfits, reindeer antlers and seasonal scarves on view — and, of course, masks — a sign of these troubled times.
Some also brought along pets, clad appropriately in bright colours. It was, after all, a family occasion. One or two people wore looks of determination, hoping to post a good time, but for many the joy of involvement was all that mattered. Afterwards, each participant could proudly wear a 30th anniversary Santa Shuffle medal, a memento of his or her role in the first virtual version of this annual fundraiser.
“It has been a wonderful week,” said Major Ed Dean, from The Salvation Army. “There have been many participants in this Shuffle.

“And for the 30th anniversary, even though it was virtual, we have been very fortunate to have so many participate. There have been the young, the old, and those in between.”
The national event, held by The Salvation Army in partnership with The Running Room, usually takes place on one day.
Organizers this year, however, faced the challenge of complying with COVID-19 rules. It was decided the event — which raises funds for Salvation Army feeding programs — would occur between Dec. 5 and 12, allowing people to “shuffle” on any day they chose.
A lot of planning went into Maple Creek’s second Santa Shuffle. On the opening day, race kits were handed out and breakfast burritos and hot chocolate were served from The Salvation Army’s Community Response Unit. One of the special guests in attendance was Santa Claus.
Participants could compete for prizes in national Santa Shuffle competitions, by taking cellphone shots of their times and photographs of their costumes. There were categories for “Top Runners” and “Best Dressed.”
At noon on Saturday, the Maple Creek Santa Shuffle climaxed at The Salvation Army with a big draw for local prizes, which included a food processor, hoodies, T-shirts, caps, a gift basket, hair products and Running Room gift cards worth $25 and $50. It was recorded live on a Facebook page.
Major Ed drew the names from a bowl, while Major Charlotte Dean announced the winners.
Afterwards, Major Ed praised the businesses and organizations that sponsored this year’s Santa Shuffle.
“We have seen a wonderful community come together to give us prizes and sponsor people,” he said. “The proceeds are going to a worthwhile cause — children’s feeding programs. It is worth investing in our children and that legacy will continue. We encourage people to join us again next year for this wonderful event. It was unique doing it virtually because we did not see the groups of people all running on the street the way we did last year.
“We look forward to doing this in 2021, which will hopefully be a COVID-free year. You never know who might show up next year.”
Major Charlotte, race co-ordinator this year, was delighted with the way the virtual event had panned out. Saturday’s draw was the culmination of months of hard work. She too hailed sponsors, who made the event possible.
“Many thanks to all who donated, and if we have missed you in the mentions, I am so sorry. Please let us know and we will make it right.
“To those who got out and dressed up and took pics for a virtual event — you made our day — every day — from Dec. 5-12th. After the great effort, Caitlin Arnal (who also worked on sponsorship this year for us), Kim Eng and Dyanna Brost put in last year, it was important to try to keep it going.
“Thank you to Ed Bath who came on board this year, delivering letters and picking up cheques. Also for two years running, Nicolette Avery Weitzel, a staff member of The Salvation Army who went above and beyond the call of duty to make it happen.”
She added, “We (The Salvation Army, Major Ed and Major Charlotte) are indebted to you all. You can’t beat the southwest of Saskatchewan (and even some from Alberta) for community spirit and you have all proven it once again.”