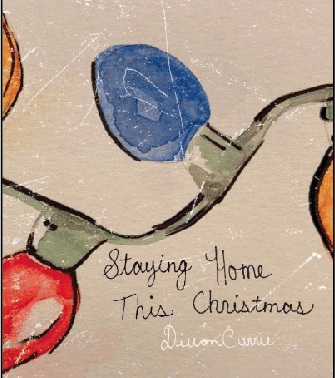 Dillon Currie, lead singer of Saskatoon-based rock band League of Wolves, is pleased to announce the release of his debut solo single — an uplifting holiday anthem called “Staying Home This Christmas.” It was released Dec. 10, according to a recent media release.
In late November, as provincial cases of COVID-19 began to spike and resounding worries of a holiday season spent in lockdown began to grow, Currie felt perhaps the gift of a fresh and current message of hope this Christmas was something the world could use this year. True to the spirit of the song, the holiday single was written and vocals recorded from Currie’s home in Swift Current, SK. The project was a remote yet collaborative effort from everyone involved.
From March until November, Currie focused on writing an album’s worth of solo material, detailing the experience of life in a global pandemic world. Currie was set to begin recording in late 2020 — however, as Canadians were once again asked to stay home by government and health officials in late November, Currie believed a song addressing the fears of the people this holiday season, but encouraging hope despite it, took precedent over the rest. The result is the holiday single, which is no doubt a sharp departure from Currie’s hard-driven rock roots with League of Wolves.
“Staying Home This Christmas” is a cozy, warm ballad — which challenges the listener to instead slow down and reflect on what is most important this Christmas season.