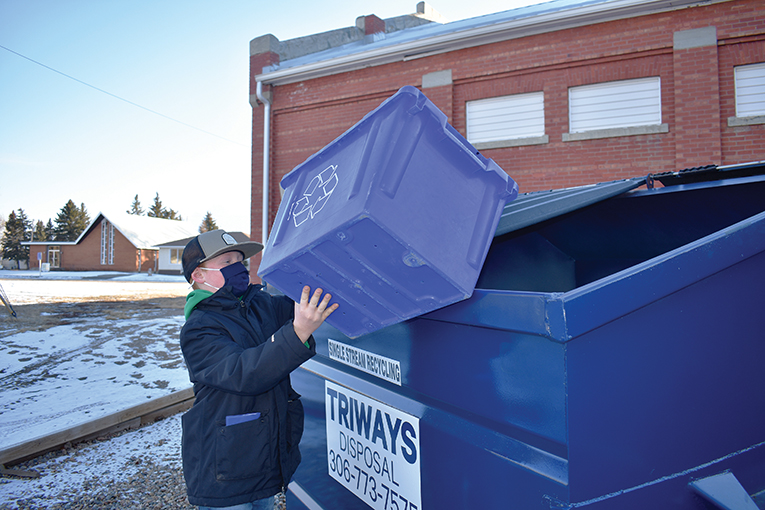 It is a cold, finger-numbing Friday afternoon. School is over and Nova Graham is on the icy streets, pulling a trolley with two blue containers full of cardboard and other recyclables.
He strides down the alleyway between Marsh Street and Sidney Street, making light of the snow, slush and patches of ice. His destination is the side of The Armouries where two six-yard Triways bins have been placed.
Once there, he jumps half-way up a bin and opens the metal lid, before emptying his containers. All that remains is to return to his Marsh Street home and note in his weekly planner whether he has been paid or not. He likes to keep track of all his jobs.
For 11-year-old Nova, trips to the blue Triways bins around town are what he signed up for with his one-person recycling service.
His offer to Maple Creek? For $3 he will take waste from your home to the nearest bin according to the single-stream recycling map recently provided by the Town Office.
He will also provide other services, if you wish. How about walking your dog or shovelling snow off a sidewalk? Or in the summer he will gladly mow your law for some pocket money.
“I will help in any way I can,” he says.
So far Nova has made $35, but is hoping business will pick up with a bit of promotion.
His venture fills a gap in the recycling market between the ending of the Town’s contract with Emterra and the start of its official partnership with Triways. The new contract is expected to start on May 1.
Nova, a Grade 6 student at the high school, may be one of the youngest ever entrepreneurs in the area. The only rival for such an accolade would probably be his younger self or sister Coven.
When he was 5 and Coven 3, they helped dad, Jesse, with a side gig, taking items twice a month to Sarcan. It gave him a taste for business and providing a helping hand in the community.
It has also got him thinking about a possible career path, one which uses his can-do approach to life. Maybe a businessman or lawyer.
Of course, those career choices will have to wait until he has fulfilled his number one ambition – to be an National Hockey League goalie.
A keen sportsman, Nova plays hockey for the Under-13s (Pee-Wees) and also enjoys football, helping his team, Maple Creek Raiders, win a championship trophy last year in Swift Current. He sharpens his skating skills on a small rink in his back yard. The mini-Zamboni for resurfacing the ice is transported on the same trolley used for carrying Nova’s recycling containers.
Nova’s mum, Krick, said her son had recently opened a CIBC bank account to deposit earnings from his enterprises, including $200 made from mowing lawns. He also received his first debit card.
“He is learning the value of a dollar and learning how to save,” Krick says.
Nova’s enterprising spirit has caught the attention of Michelle McKenzie, the Mayor of Maple Creek.
“I’m so proud of him,” she says. “He’s an exceptional young man. If any seniors, or anyone else, find it troublesome to take recyclables to the bins around town, he will step in and do it.
“I think it’s outstanding that he’s learning a valuable lesson about business and is starting to be an entrepreneur. Isn’t that great?”
So does Nova have a name yet for his recycling service?
“Nova Recycling,” he says after a pause. “If I think of something better I’ll let you know.”
Anyone wishing to take advantage of Nova’s recycling service – or has another chore that needs doing – should dial 306-661-8363 or leave a text. Nova should be available on weekends or after 4pm on week days. Do contact him. Nova would love to help and add a little something to his bank account!