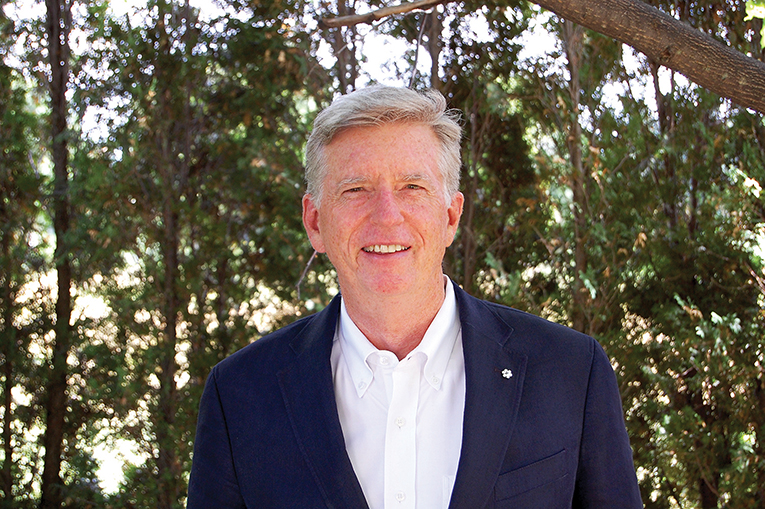 A national spotlight was trained on Maple Creek after celebrated gardener Mark Cullen came to town … virtually.
There were viewers from all over Canada, including Ontario, Nova Scotia and Manitoba. People from Wyoming also reportedly watched his live-streamed presentation.
Cullen was a special guest for the Communities in Bloom 10th anniversary soiree on Wednesday evening.
His visit via Zoom and Facebook was recognition of Maple Creek’s Communities in Bloom success in 2019. The community, which participated in the Circle of Excellence-Evaluated category, won a 5 Blooms-Bronze rating and a special mention for Landscape Integration during the 2019 National/International Symposium and Awards ceremonies in Yarmouth, Nova Scotia. It also received an Outstanding Achievement Award for the Home Hardware Community Involvement Award.
More than 500 people watched the soiree, which was held virtually to comply with COVID-19 regulations.
The MC for the evening was Nola Sanderson, from Kelli Dee Floral, while Savannah Mass, the Town’s tourism and communications manager, used her technology skills to organize the event. She also operated the slides.
Cullen, an author, broadcaster and spokesman for Home Hardware, said he was privileged to be in Maple Creek, albeit virtually.
Praising the volunteers, he said he looked forward to the day he could explore the community, as well as Fort Walsh.
“Congratulations to all of the people of Maple Creek, especially the people who have volunteered to make your Communities in Bloom effort so extraordinary, the best in the country.”
Cullen said he wanted to take a light approach to the subject of how gardening experience is changing people in Canada. He based his talk on his book, “Escape to Reality: How Gardening is Changing the World and the World is Changing Gardening.”
Highlights of his presentation included:
Changes in the way people approach nature. Rather than trying to control it through chemicals, they embrace it. “We have decided to work with Mother Nature, to be a partner with Mother Nature,” said Cullen;
Plant blindness. Even though plants give us life, too often they are naked to us;      Lessons from the British. Cullen showed pictures of the Eden Project, the Lost Gardens of Heligan and Kew Gardens, saying that gardening to the British equated with Canadians’ love of hockey. “The only difference is hockey is barely 200 years old. But gardening in the UK goes back more than 500 years” he said;
The importance of critters. Creatures like snakes, toads, frogs and bats help make gardens spectacular. So too do insects. “99 per cent of insects in our garden are beneficial. “If you want to garden sustainably you have got to start with 99 percent of insects, because of nature’s web,” he said;
Food prosperity and building community. Community food centres are providing a hub in high-risk communities where people have difficulty in finding resources to feed themselves. They are taught to grow food they eat. The concept of community gardens is also exploding in urban environments; and The Highway of Heroes Tree Campaign, an initiative to support the environment and honour Canada’s fallen heroes by reforesting the highway from Trenton to Toronto.
Cullen finished with a word of encouragement for those who believe they have no natural talent for gardening. “Nobody I believe is born with a green thumb, you acquire a green thumb.” Afterwards, he answered gardening-related questions. Questions ranged from “how do snakes help gardens?” to “how can Maple Creek save its trees canopy?”
At the start of the evening, Sanderson spoke about Maple Creek in Bloom’s 10th anniversary. She said the first year coincided with the “flood of the century”.
Judges gave Maple Creek three “pity” blooms out of five, she said, adding: “We realized we had a long way to go. We took to heart the judges’ comments and suggestions.”
In 2017, five blooms were awarded at the national level, thanks to Communities in Bloom (CiB) volunteers, the Town and its citizens.
Sanderson said that five parks had been developed over the ten years: Credit Union Park, Land of Living Skies, Post Office park, Centennial Park and the Community Garden.
“We have a beautiful welcoming town and a pride of place. We all share it.”
Sanderson said the CiB Committee had faced many challenges – including the COVID-19 pandemic – with a mixture of fun and frivolity.
“We’ve turned lemons into lemonade,” she said and added: “This year we will celebrate like every other year, just a little further apart.”
The last part of the soiree featured slide shows of the business of the month and yard of the week, winning submissions in the photography contest and the door prizes draw.
The flower of the year was also announced: Marigold, reflecting the theme of hope.