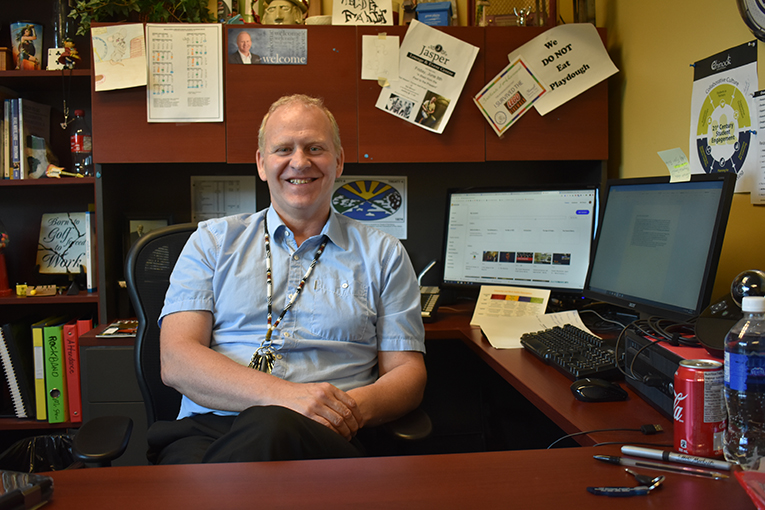 As a principal, Rob Stewart was keen to find a way to build a sense of togetherness within and beyond the walls of Sidney Street School. In the age of COVID-19, this seemed particularly important to him.
Then he and vice-principal Shelley Huck had an idea: What better way for people to bond than to break bread together?
At about 11.30am tomorrow (Friday, February 5), their idea will bear fruit when The Salvation Army’s Community Response Unit pulls up outside Sidney Street School to deliver nearly 250 hot meals for students and staff to eat during the 12-1pm lunch break. The plan is to deliver hot, nutritious lunches every Friday until June 25, just before the school summer break. The program has been made possible by about $20,000 in funding from Ag Canada. An additional $4,000 from last year’s virtual Santa Shuffle is also going towards it.
Major Charlotte Dean, from The Salvation Army’s Maple Creek Community Church, said the program was a big undertaking requiring extra staffing.
Food will be prepared by Major Ed Dean and Nico Avery-Weitzel in The Salvation Army kitchen, with the help of two or three volunteers.
“Work involves preparing the food, packaging it and then cleaning up,” said Major Charlotte.
She added that in March an extra worker would probably be hired to work alongside Major Ed.
“It will be a temporary paid position.”
Major Charlotte said a menu had been drawn up with eight meals, which would be recycled through the 18 Fridays in the program. The menu, she added, is subject to change, which could happen if, for instance, somebody offered The Salvation Army a great food deal.
“Every meal comes with fresh vegetables like carrots and celeries, and there will be oranges every week,” she said.
“The food will be as kid-friendly as possible – we are talking about children aged 6, 7, 8 and 9. On June 25, there will be a celebration, so we will probably have ice-cream and tacos in a bag.
“All the meals will be delivered in brown paper bags. Student leaders will meet The Salvation Army truck with cooler bags to keep the food warm.”
At this stage, drinks, such as fruit boxes, are not included.
“It is a question of affordability,” said Major Charlotte. “I’ve been told that there are water stations at the school where children can fill up their bottles.”
Major Charlotte supported the concept of the lunch program.
“It’s about community and everybody doing something together,” she said. “I love the idea.”
Stewart said the school had worked very hard with its partners – The Salvation Army and Ag Canada – to set up the program.
“The primary need was to create a sense of community and togetherness within and beyond our school walls,” he said.
Stewart added that he hoped there would be representation from Chinook School Division, The Salvation Army, school staff and Sidney’s School Community Council helping out for the first day tomorrow.