Learning the art of animal portraiture 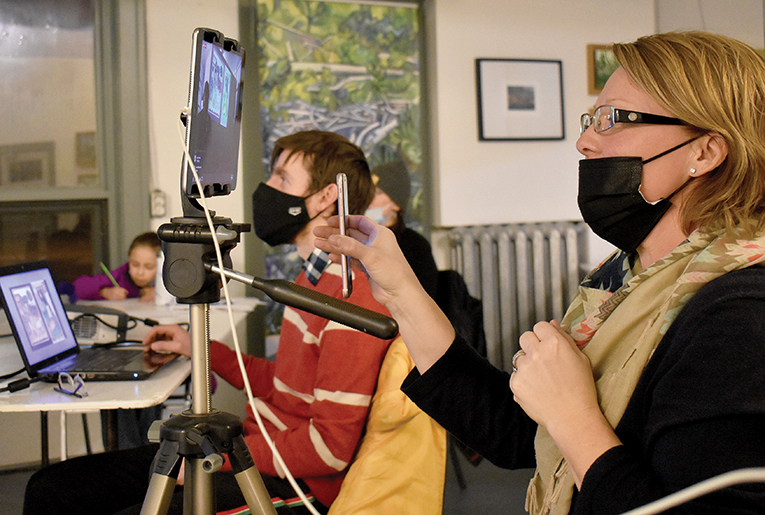 Keep it simple. Start with a rectangle and draw shapes off the side. Add details later.
With these instructions, a dozen people seated in the C.M. Glascock Building, with pencils in hand and leaning over pieces of paper, began drawing the outline of a cow.
What artist and workshop leader Geoff Phillips had in mind was the type of cow in a picture that might have adorned the walls of a home during the 18th and early 20th century when art and agriculture were closely entwined. It might have been a cow pictured in a flyer or newspaper.
Paintings would invariably show cattle with large bodies – indicators of meat in abundance, successful breeding and the owner’s affluence and status. Plenty of artistic licence was taken in depicting size.
Last Thursday’s agriculture-and-art workshop was the first in a series of five being put on by Phillips, his wife Connie, also an artist, and the S.W. Saskatchewan Oldtimers’ Museum. The event has been funded by a $10,000 Artists in Communities-Projects grant from SK Arts.
There were 12 in-person participants, while scores of others tuned in via Zoom.
As cows began to take shape on sheets of paper, Phillips delivered a slideshow on artists who featured animals in their work. They included Vincent Van Gogh (“Lying Cow”) and Pablo Picasso, who studied the form of the bull, breaking it down to get to its essence. In one picture, Picasso is on a beach wearing a bull mask. He saw the bull as a symbol of virility and strength.
Another slide showed pop artist Andy Warhol’s cow wallpaper, which was the first in a series of wallpaper designs he created from the 1960s to the 1980s.
Phillips went on to mention Damien Hirst’s “Mother and Child (Divided)”, a floor-based sculpture comprising four glass-walled tanks, containing the two halves of a cow and calf, each bisected and preserved in formaldehyde solution.
“It was a very controversial piece, using real animals,” said Phillips, adding that Hirst’s intention was to shock, choosing the cow because of its place in history and culture.
Phillips also spoke about Saskatchewan sculptor Joseph Fafard, whose best art is inspired by, and pays homage to, his community and farm life. His insight and humour characterized his portraits of farm animals and wildlife, among other subjects. His bronze work is displayed across Canada and his cows became a trademark.
While Phillips spoke, Connie, who is documenting the workshop and providing technical support, went from table to table taking cellphone pictures of the participants’ work.
The focus of the next session, taking place tonight (Thursday, Feb. 4), is horses.