Horses in art through the ages 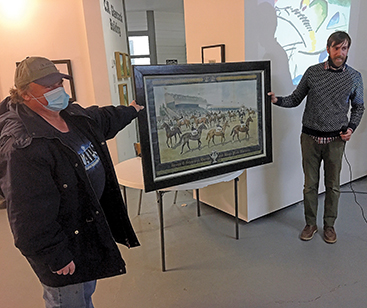 One for the living room? This framed painting, held by Clay Yarshenko and Geoff Phillips, is from the SW Saskatchewan Oldtimers’ Museum collection.

They have been used in war, racing, transportation and agriculture. They have featured extensively in art, be it paintings, sculpture and porcelain. They have also inspired songs and a wealth of literary works.   From the days of cave paintings, horses have held an enduring appeal through human history.    In the 20th century, for example, there was an explosion of books on horses following the acclaim of Black Beauty, an 1877 novel by English author Anna Sewell that still captures the imagination today.
Last Thursday, Clay Yarshenko, a local historian and rancher, spoke of the allure of horses during the second of five art-in-agriculture sessions at the C.M. Glascock Building.
“Horses are just everywhere in art, because one they are sexy and people love them,” he said.
Yarshenko, from the S.W. Saskatchewan Oldtimers’ Museum, took viewers on a rapid journey through time, using slides of art to illustrate the evolving relationship between horses and humans.
It differed greatly from the journey featuring cattle, described in the opening session.
“Horses are not an agricultural product per se,” he said.
“They are not a commodity like beef or pork, grain or corn, or chickens …”
Thousands of years ago, horses appeared in cave paintings in Lascaux, France.
“This is back in the day when they were still hunting horses for food,” said Yarshenko. A succession of slides showed horses in ancient Egypt, Alexander the Great (long associated with his horse, Bucephalus), an equestrian statue of Marcus Aurelius, a scene from the Bayeux Tapestry (an embroidered cloth depicting events leading up to the Norman conquest of England, culminating in the Battle of Hastings), and horses carrying knights into battle in medieval times.
There were also slides of horses on a fox hunt, and racehorses.
“These horses were improved using Arab stock, and horses from Turkey were imported as well, and crossed with various European and English breeds, and so we have what they call the blooded horse that we are familiar with.
“The thoroughbred would emerge from that process of crossbreeding.”
Another slide showed an image from the coaching age, which took off with the improvement in highways in the 1700s into the 1800s.
This led to some enhancements in certain breeds of horses, like the Percheron, a breed of draft horse that originated in the Huisne river valley in western France.
As the coaching age gave way to the arrival of railroads, and the industrial revolution took off in the 19th century, workhorses came into their own.
There was a huge market for Percherons in North America.Thousands and thousands of Percherons were shipped over there to do work in the fields.
“I guess when we think of horses in agriculture, other than the cattle horse that we are all familiar with, this is what we think of,” Yarshenko said.