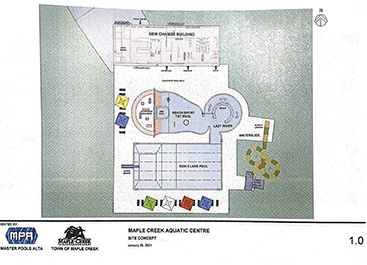 Pictures of what Maple Creek’s proposed swimming pool might look like have been released by Edmonton-based Master Pools Alta.
The preliminary images show a 25-metre pool with five lanes and a diving board, a pool house bearing the sign “Maple Creek Aquatic Centre”, and an aerial view of the development.
They contain features wished for by the Maple Creek Swimming Pool Fundraising Committee, including:
• A water slide with a runout landing ;
• A lazy river connected to the main pool; and
• A beach entry tot pool, which links with the lazy river.
“We are really excited by what we are seeing,” said Corrie Scott, chairperson of the fundraising committee.
She warned, however, these were only preliminary drawings and, therefore, subject to change.
The images come as the committee prepares to step up its fundraising efforts.
So far, about $150,000 has been raised through various enterprises, a big chunk of it coming from a month-long online auction.
Two more ventures are in the pipeline. The first one is a raffle for 1/2 a beef, cut and wrapped.
The value of the prize is $2,000 and has been donated by Kris and Darvin Mason at 7D Ranch in Maple Creek, and by Don Wilk at Cattle Boss Butchers in Fox Valley.
Scott said tickets were now being sold.
“Many of the local businesses have tickets for this raffle,” she said, adding that the draw would take place at the Legion at noon on Wednesday, March 3.
Another potential fundraiser is the Saskatchewan Blue Cross – Go Out and Play Challenge, with $10,000 up for grabs. The winner will be known by March 12. See story on Page 5.
“Hopefully by March 12, we are closer to our fundraising goal,” said Scott.
The committee is also working on grant applications, one of them for Co-op Community Spaces funding.
This program was established to improve community health and wellbeing by building places for Western Canadians to come together, build social connections and enable community development. Between $25,000 and $150,000 can be applied for in capital funding in three categories: recreation, environmental conservation and urban agriculture.
It was in October that Maple Creek Town Council agreed to award the pool tender to Master Pools Alta.
Council heard that the total cost of the project could be as high as $2.8 million.
The company’s portion of the project is estimated to be about $1,485,000, so-called in-scope costs. This is limited to building the pool with its features. Council decided to put a cap of $1.6m on Master Pools’ work, covering unforeseen expenses.
The Town is budgeting for the rest of the project – roughly $1.3m, referred to as out-of-scope costs, which include demolition of the existing pool, lowering the hill, concrete and decking, temporary fencing, building a mechanical room, changing rooms and an office. Some of these jobs, such as demolition and levelling, have already been done.
The next on-site work will involved packing the ground, which can only take place once it has thawed, probably in April.
Corrie Scott said the $2.8m figure was a high estimate. It was believed the final cost could be whittled down to about $2.2m.
She added that the fundraising committee’s goal was $700,000.
Originally, there were hopes of the new pool being ready by July 1, 2021. The new target date, said Scott, was July 1, 2022, weather permitting. This would mean construction work starting in October.
• The next meeting of the fundraising committee is at 7pm on Wednesday, March 3 at Cowboy Church. Anyone is welcome to attend.