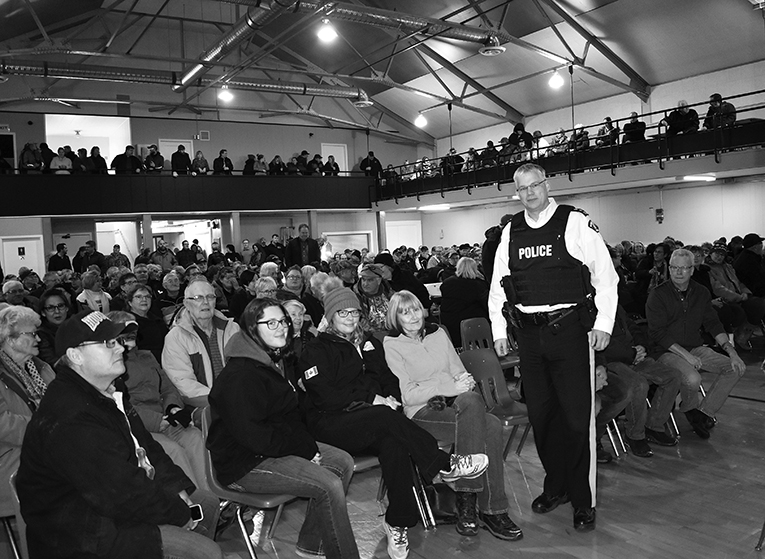 Accounting and business consulting firm, MNP, has completed its report examining policing for Southwest rural Saskatchewan.
Now a committee is to be formed to look into options put forward by the study. The group will be made up of representatives from the Southwest, RCMP and province. Maple Creek will be represented.
The committee will then send recommendations to the province and senior management of the RCMP.
MNP, formerly Myers Norris Penny, had been retained by the RCMP to review the deployment model for the Cypress Region.
The objectives were to:
• Analyze the current policing situation and challenges;
• Review relevant research on existing policing models that are similar to the proposed super-hub policing model;
• Assess the viability of a super-hub policing concept for the Swift Current region using consultations and evidence-based research;
• Identify and recommend a specific super-hub policing model for the Swift Current region including an in-depth cost-benefit analysis and review of facilities, policies, procedures and results from extensive stakeholder consultations; and
• Develop a phased implementation plan, communication plan, and evaluation framework for the recommended Cypress Regional Detachment.
In January, 2020, as many as 430 people filled the Armouries for a meeting on the future of policing in Maple Creek.
Concern was voiced about the idea of a super-hub policing model for the Swift Current region, perceived as a move towards centralization of services.
Fears included a diminished police presence in the Maple Creek area, a delayed response to incidents or complaints, the sending of wrong signals to criminals, and loss of tax dollars to the town.
The man behind the super-hub concept, Supt. Kevin Kunetski, district officer for the South District Management Team, based in Regina, attempted to allay residents’ concerns.
He said no detachments would be closed in the region, officer presence would remain in communities served by the RCMP, and that options for a new deployment model would be designed to try to better meet local needs. Kunetzki rejected suggestions that the review was a cost-cutting exercise or driven by budgetary considerations.
After the meeting, Supt. Kunetzki said that he was challenging the status quo of the present model to see if the RCMP can better address today’s challenges for communities.
“At this stage, the concept of a Super-Hub is only intended to have MNP consider a collective group of detachments, as opposed to the model we have now, which sees us as separate detachment entities,” he said in a letter thanking those communities that had participated in a consultation process. “For the greatest clarity, neither of these conceptual terms (Super-Hub or Cypress Regional Detachment) is used to describe or infer a situation where members would all work out of a single location, and then be dispatched to calls for service from that location. Our area is far too large for that type of model. We are also not looking to close any detachments or reduce police services to the public.”
News about the completion of MNP’s report has been given to Gary Schlageter, the Town of Maple Creek’s Chief Administrative Officer, by Staff Sgt. Gary Hodges, South District Management Team (Swift Current), RCMP.
In an email – which was read out by Michelle McKenzie, the Mayor, at the Feb. 23 Town Council meeting – Staff Sgt. Hodges said that the Ministry of Corrections, Policing, and Public Safety had been given a presentation on the content of the MNP report.
“In advance of Supt. Kevin Kunetzki providing any presentations, as he indicated he would on the report, the Ministry has asked the RCMP to strike a Committee to be made up of representatives from the Southwest, the RCMP and the Province to look at the options identified in the report and provide their recommendations back to the Province and Senior Management of the RCMP. I am currently drafting the Terms of Reference for that Committee which will include the membership of same. The Committee membership is to include a representative from the Town of Maple Creek. I would ask if you could consult with your elected officials to identify someone from the Town for this Committee and provide me with their name, role in the community and contact information.”
The email had been copied to Sgt. John Phipps, head of the Maple Creek RCMP detachment.
McKenzie said other communities involved in the process included the Town of Shaunavon, Cabri, the RM of Miry Creek, Vanguard, and possibly Tomkpins. There was a desire to have representatives from rural communities that didn’t have RCMP detachments in the southwest.
It was apparent, McKenzie said, that the team looking into policing models did not want direction from the RCMP – it wanted it from the communities.
McKenzie welcomed the invitation for input, but pointed out that the Maple Creek detachment served an area of 10,000 square kilometres. That was a significant area for just one person on the committee to talk about.
Councillor Cara Teichroeb said: “It’s important that we are still passionate about this issue. We are passionate because we know that there will an impact in our area and we want to be involved. We are not going to let that waver.”
McKenzie agreed, saying there was no chance of that passion diminishing.
In February, 2020, Town Councillors turned a critical spotlight on the “super-hub” policing model when they attended the Saskatchewan Urban Municipalities Convention in Regina.
They wore special T-shirts bearing a protest logo on the front: a red circle with a diagonal cross through the words “super hub policing.”
In addition, buttons and business cards with the same logo were handed to convention delegates.