Beginning of the end? Vaccines being rolled out across area in phases 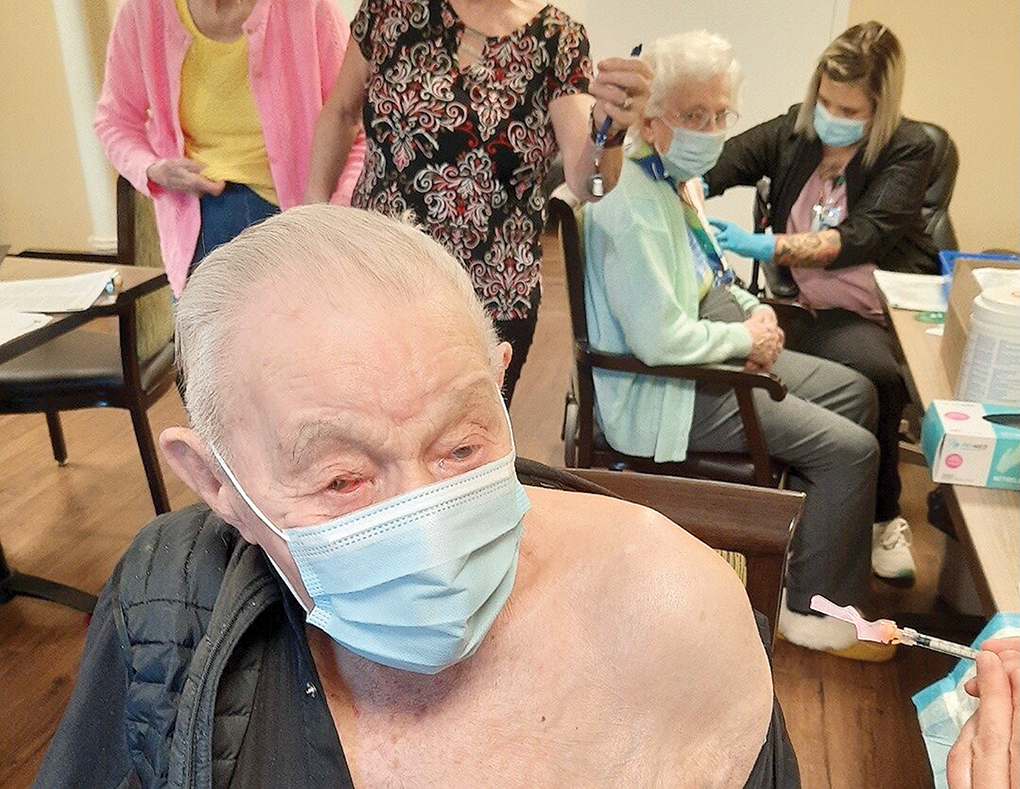 Harry Forbes, one of the residents of Cypress Lodge, receives a Pfizer jab.

Maple Creek is beginning to receive protection from COVID-19.
Vaccines are being rolled out in the area as part of a phased delivery across the province. Phase one focuses on high-risk populations, people of advanced age, and health care workers.
So far, long-term care residents at the Southwest Integrated Healthcare Facility and assisted living complex, Cypress Lodge, have received their first Pfizer jabs. Staff too have been offered the vaccine.
Tenants at seniors housing facilities Southview Manor and Sunglow Court who are aged 70 and over have also had the opportunity to be vaccinated.
Others in the same age bracket are being contacted as well in this initial phase, likely to end this month. In addition, the Nekaneet First Nations has received dosages to start a vaccination clinic at its own site.
The second phase of the delivery strategy is expected to start next month, reportedly on April 5, and run through June. The focus is the general population according to age, as well as the clinically extremely vulnerable and people in emergency shelters and group homes.
Vaccinations will be carried out in five 10-year increments, starting with the oldest and working down: 60-69; 50-59; 40-49; 30-39; and 18-29.
The plan is built on the foundation of age as the main risk factor for severe outcomes, hospitalizations and deaths related to the virus.
All approved COVID-19 vaccines in Canada require two doses per person.
According to the National Advisory Committee on Immunization (NACI), the recommended interval between first and second doses is up to four months.
James Winkel, communications lead with Saskatchewan Health Authority, said the timeline for Saskatchewan’s COVID-19 vaccination delivery strategy depends on vaccine supply and availability.
“It’s a fluid situation,” he said. “We are trying to pull everything together as best we can.”
Winkel said people were being phoned about receiving Pfizer jabs. The SHA was also working on providing an online capability.
In the second phase of the vaccine rollout, SHA plans to operate 230 clinics on more than 180 communities across the province. Appointments will be needed for these sites.
Drive thru locations will provide the vaccine without an appointment, although these clinics will probably have longer wait times and lineups. Each community may have more than one clinic location.
Details about clinic sites and hours will be provided later as the province moves into this second phase.
Last week, the Maple Creek News-Times tried to find out how phase one of the vaccine rollout was progressing in this area. First, we contacted Cypress Lodge, a personalized assisted living care home for senior citizens.
Jeanie Culligan, director of care at Cypress Lodge, said that all 34 residents – and three-quarters of the staff – received the Pfizer vaccine on Wednesday, February 24. Among those inoculated was Harry Forbes, who will be 103 on April 8.
Three nurses from Maple Creek carried out the immunization process in the residents’ dining area. After being inoculated, each resident sat in the area for 15 minutes and was observed.
“There were no adverse effects,” said Culligan.
Did she receive a jab?
“Absolutely,” she replied. “I had a sore arm the next day, but that was that.”
Culligan said the interval between the first and second jabs was still being deliberated,
“We are waiting to be advised,” she added.
The News-Times also contacted Lisa Keslick, manager of the Maple Creek Housing Authority, which runs Southview Manor, Sunglow Court, and a small number of low-income rental houses.
She pointed out that the two seniors housing facilities were independent-living properties and tenants were responsible for their own health needs.
“I believe most of the tenants have had the opportunity to be vaccinated,” she said, referring to those aged 70 and over.
One of the Southview Manor tenants is Marlene Anhorn, who used to cook at the hospital. She said she had been contacted by Marie Deshaies, head of Home Care.
“Marie asked me to put out a sheet of paper on which tenants could sign their name if they wanted to get vaccinated,” she said.
Anhorn said nurses came to Southview Manor at 2.30pm on a Friday after visiting Sunglow.
“We were told to wear masks, have our Saskatchewan hospital services card ready, and to sit socially distances,” she said.
The long-term care facility at the hospital referred this paper to the SHA, which confirmed that all residents had been vaccinated.
Michelle McKenzie, the Mayor of Maple Creek, recommended that people get vaccinated.
“It helps build up antibodies and the immune system,” she said. “It is important to be proactive.”
McKenzie hoped the vaccines would also have a positive benefit on mental health, which has become an issue during the pandemic.
News about the vaccine rollout comes as concern about the pandemic was heightened by reports of a positive COVID-19 case at Shaunavon Public School.

AT A GLANCE: THE LOCAL PICTURE SO FAR

• Maple Creek received first dosages of Pfizer-Moderna on February 24.
• The Saskatchewan Health Authority (SHA) held vaccine clinics on Feb. 24, 25, & 26.
• The SHA completed vaccinations of residents, and some staff, at the long-term care facility at the Southwest Integrated Healthcare Facility on Feb. 24. Also a vaccination team attended Cypress Lodge to complete vaccination for their residents and staff.
• February 25 – a representative from Nekaneet First Nations received their allotment of dosages to start a vaccination clinic at their own site.
• In Maple Creek, dosages of Pfizer continued to be administered to community  members that were 70-plus, as well as any other staff that couldn’t be vaccinated the day before.
• February 26 – vaccination of community population of 70-plus, and staff, continues.