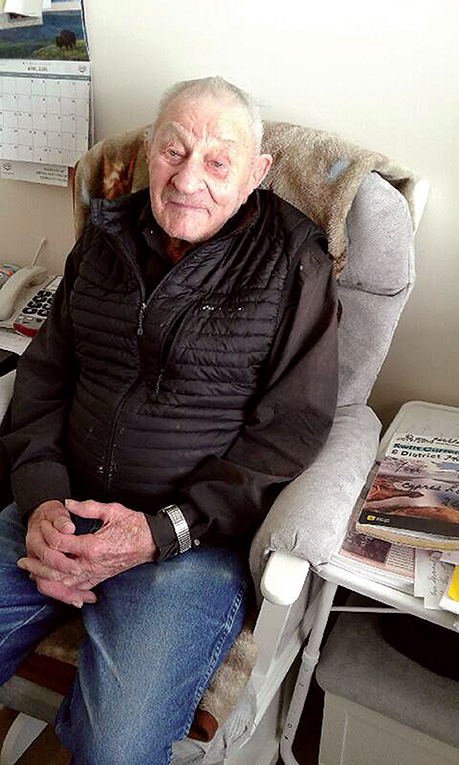 Photo by Marcus Day Inspired to write: Harry Forbes, who wrote about Bill Mutrie, described him as one of the area's toughest oldtimers.

By Harry Forbes
The Charlie Russell watercolour of a starving cow in the brutal winter of 1886-87 – printed in the February 18 Maple Creek News as part of our coverage of the January-March art-and-agriculture series – has inspired Harry Forbes to write about another winter tale, one involving Bill Mutrie.
Clay Yarshenko, local historian and rancher, told the story about the Russell picture, known as “Last of 5,000” or “Waiting for a Chinook”, during a slideshow at the C.M. Glascock Building. The series had been organized by artists Geoff and Connie Phillips and the S.W. Saskatchewan Oldtimers’ Museum.
Russell (1864-1926) came to Montana as a teenager and worked on a ranch, looking after cattle. The winter of 1886-87 was the hardest on the open range in living memory. What little hay most ranchers had, they fed to their horses. In the meantime, cattle drifted from the frozen high ranges to the bottom land and the sheltered coulees, where there was no food but willows. Cattle would hump up and die.
When the ranch owners wrote to Russell, asking him how the cows had weathered the winter, he sent them a picture, depicting a gaunt cow under a grey, winter sky, being stalked by wolves.
In a letter to the Maple Creek News, Forbes, a resident at Cypress Lodge, said the picture reminded him of one of this area’s toughest old-timers, Bill Mutrie.
Mutrie, wrote Forbes, endured “our toughest winter on record” with a four-horse tandem team and sleigh, a buffalo robe and a coal-oil lantern and determination. In 1904, as a local cowhand at age 30, Mutrie moved his family into Maple Creek for schooling.
“He rented a horse livery stable from Jules Quesnelle,” wrote Forbes.
“He then took over a contract for a 60-mile mail route from Maple Creek to Eastend, a 120 miles round trip driving four horses tandem in winter, plus hauling some necessary groceries. Come blizzard or sunshine, the mail must go through.
“The mail route – Skibbereen Post Office, at Sandy McCarthy’s, next Skull Creek at Jim Mann’s, a change of horses at Tom Doyle’s on Skull Creek on to Stone Post Office, a change of horses at Ben Rose’s, then Eastend post office, then Eastend and back to Maple Creek. All went well until the winter of 1906-1907. That winter started November 5 with bitter cold and never stopped snowing. As the winter got colder and the snow got deeper, Bill used a coal-oil lantern under a buffalo robe to keep his feet from freezing. As the snow got deeper and deeper and his sleigh road disappeared Bill had to break large branches off trees to stick in the snow to mark his sleigh road to stay on his snow-packed trail.
“If you are driving on a 1ft or 1½ foot of hard-packed sleigh road and one side of your sleigh slides off into loose snow, causing you to lose your grip on the mail and groceries – maybe a 100-pound bag of flour falls on top of you as you hold the lines on four horses in 3ft or 4ft or maybe more of loose snow – you are in deep trouble. That winter of 1906-1907 it sometimes took Bill a whole week to make the round trip, arriving back in Maple Creek just in time to go again, owing to deep snow, blizzards in the hills and extremely cold weather.
“There was a saying during the winter of 1906-1907 that the only thing that could cross the Cypress Hills was Bill Mutrie or a coyote.
“The end of March and in April when the Chinooks came, the snow melted, the skeletons of cows were found hanging in the branches of trees, in coulees where deep snow had drifted.”