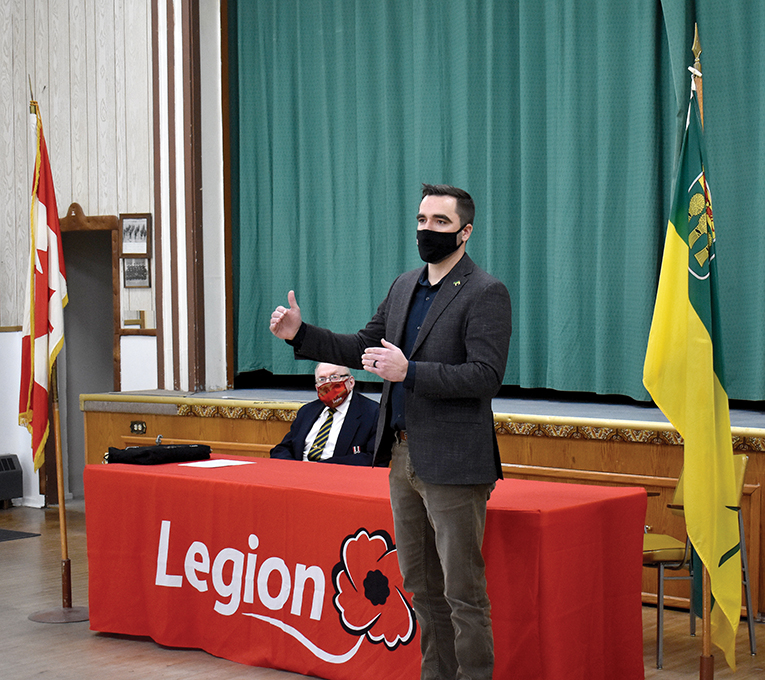 Proud of your service: Jeremy Patzer talks about the important role of the Legion in communities. The federal government has provided financial assistance to the Maple Creek and Piapot RCL branches. Photo by Marcus Day

The Maple Creek and Piapot branches of the Royal Canadian Legion have received financial assistance from the federal government to help cope with pandemic challenges. Both branches applied for and received funding in the amount of $10,620 and $2,000 respectively.
Maple Creek Legion president Barry Vandervelde and Piapot Legion president Charlie Bertam met Jeremy Patzer, MP for Cypress Hills-Grasslands, at the Maple Creek Legion Hall last Wednesday (March 17) to discuss funding and the path forward amid COVID-19.
Also present were Walter Arnold, Zone Commander of District 2, Zone 2; Lester Nickel, Deputy Zone Commander of District 2, Zone 2; and Michelle McKenzie, the Mayor of Maple Creek.
Recording the press conference on a cellphone was Walter’s wife, Debbie, Maple Creek Legion branch treasurer.
“I want to thank the federal government for the funding, which will be used for Legion expenses,” said Vandervelde.
Bertram also expressed his appreciation, noting that he “would like to sincerely thank the federal government for the pandemic funding.
“This funding will assist with the operational expenses of the Piapot Legion.”
Patzer acknowledged the impact the funding would have on the two legions.
“I am grateful for this federal support to our legions,” he said. “I know it will go a long way in ensuring the doors stay open and that the Maple Creek and Piapot branches can continue to serve our veterans and our community.”
Patzer went on to thank the branch members for the incredible work they do in the surrounding community.
“Their service is invaluable, and I’m thankful for this funding which will allow them to continue to serve the Maple Creek and Piapot communities and beyond.”
Patzer told the conference that he had made similar federal funding announcements in Kindersley and Swift Current.
“The funding is huge, it helps keeps the doors open, it keeps the bills paid, and makes sure that the programs that are offered can be there once restrictions are lifted and we are able to resume functioning as normal.
“I definitely want to make sure that I thank everyone in the Legion for the great service that is provided historically and continually to this day and will be provided moving forward.”
Bertram said the Piapot Legion had hosted 4-H speeches on Sunday, although COVID restrictions were in place, limiting numbers who could attend.
Patzer said he hoped the federal funding would provide stopgap support until the economy fully opened up.
“We are looking to have the federal and provincial governments working together so we can get control over everything,” he said.
Walter Arnold thanked all those who attended the press conference.
McKenzie said Maple Creek Legion members were very excited by and appreciative of the financial backing.
“It will bridge the gap until we can open up,” she said.
She went on to describe the Legion as the lifeblood of the community.
“Our war veterans do a great deal and we are very proud of them,” she said.
Patzer said he had been delighted to hear about the youth programs at the Legion, including the darts league, which helped instil pride in young people and the community at large.
“People associate the Legion with Remembrance Day and the Poppy Campaign. It’s so much more than just one day and one campaign. Thank you so much for the service you provide to the youth and the greater community.”
After the conference, Debbie Arnold gave Patzer a guided tour of the Legion, which included an inspection of the renovated washrooms and the new wheelchair-accessible facility.
Patzer even had time to try his luck in Chase the Ace. He bought two $5 tickets. Did he win? Alas, no. Better luck next time, Jeremy!
• On November 10 of last year, the federal government announced a $20 million aid package to help veteran organizations get through the pandemic.
The Legion received $14 million of that amount, which was distributed to various branches across Canada.
The funds are intended to cover a range of operational items such as insurance, utilities, rent or mortgage, property tax, administration costs and wages, among other needs.
Founded in 1925, the Legion is Canada’s largest veteran support and community service organization.
It is a non-profit organization with a national reach across Canada as well as branches in the US, Europe and Mexico.
With close to 260,000 members, many of whom volunteer an extraordinary amount of time in their branches, its strength is its members.