Out goes the ice 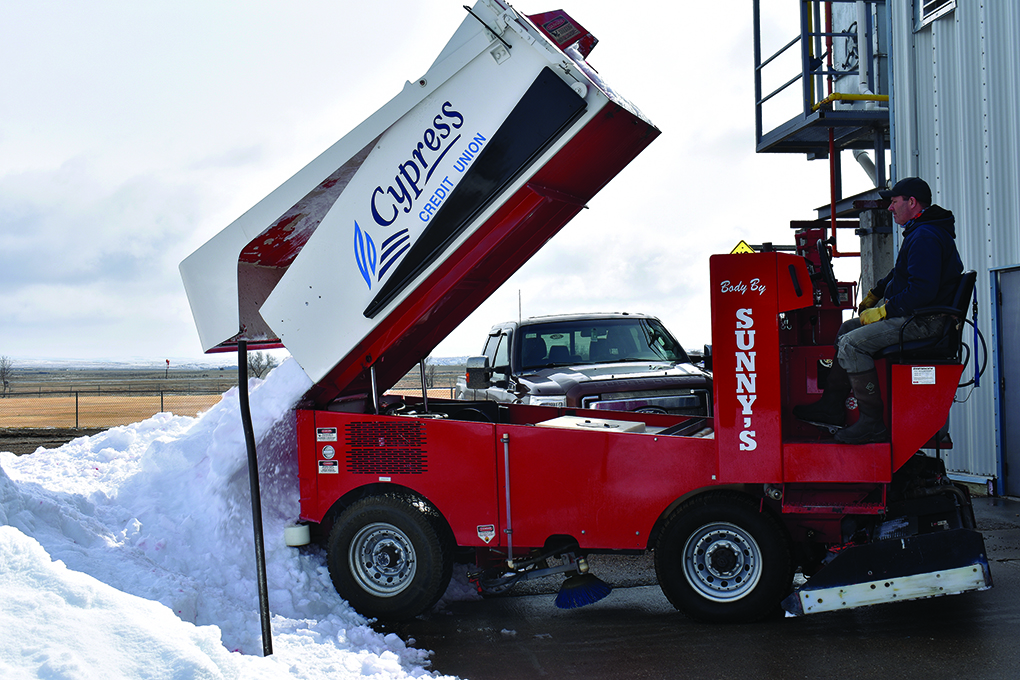 A day after skating at Maple Creek rink ended for the season, a huge pile of snow formed outside the arena. Before Monday’s ferocious winter storm, this could have been a go-to place for snowball fighting.
The white mountain was created by Kelly Keslick, arena manager, who had driven a Zamboni repeatedly around the 200ft by 80ft rink, shaving the 1½-inch thick ice and dumping each load outside.
When the Maple Creek News arrived at 3.30pm on Friday, March 26, Keslick had released about 16 loads.
Shaving the rink surface is a key task during day #1 of removing the ice, a process that can take up to four days.
Another job is switching off the compressor in the mechanical room and allowing brinewater from the brine pump to circulate beneath the concrete slab and begin melting ice, a process that can be aided by hot water from a hose. The pump will later be switched off.
One of the final steps often sees up to 30 people gather at the rink to sweep excess water into the drains, using squeegees.
“A lot of children come,” said Keslick. “They have a great deal of fun.”
Keslick suggested the News-Times return to the rink on Monday evening to photograph this season-ending spectacle. However, the impending winter storm meant the tradition was brought forward to Sunday, so the paper missed it.
This is the third year that Keslick has been removing the ice, a skill that he acquired on a course. .
What does he do during the off-season, when the arena rink is a concrete slab used for baseball?
He works for Parks and Recreation.
Come the first week of October, however, his rink skills will be required again, this time to return the ice; the process involves driving the Zamboni about 160 times over the surface, ensuring the ice is smooth and the correct thickness.
He will maintain an optimal surface temperature of 20 degrees Fahrenheit.
“Hockey players like the ice about 18 degrees, while figure skaters prefer it slightly softer – 22 degrees,” he said. “I keep the temperature between those figures, to keep everyone happy.”
Keslick’s work – and that of other arena staff – tends to go under the radar.
How many of those who use the rink, let alone the rest of the public, think about the behind-the-scenes effort to put the ice there … and to remove it?