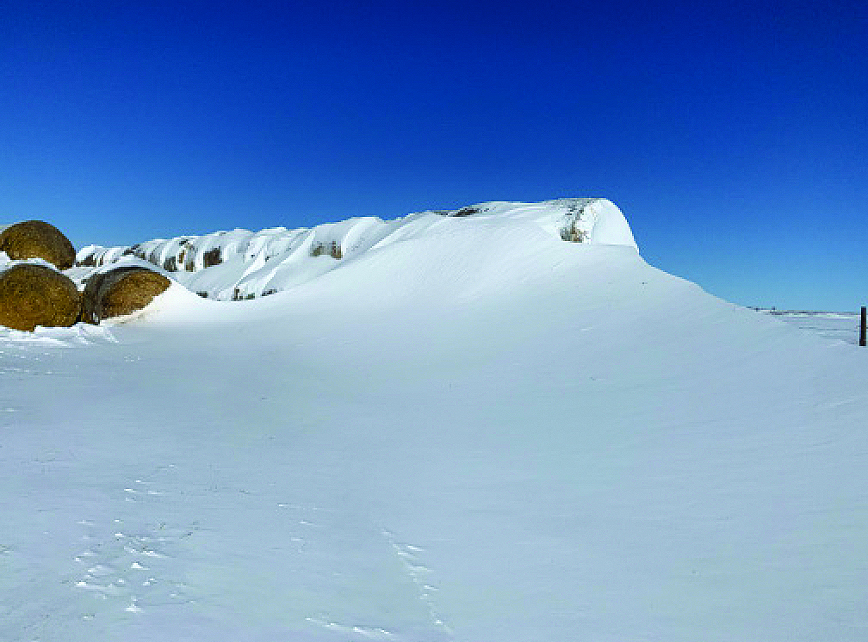 This photo by Raeanne Neitz looks like it captures a mountain scene. In fact, it shows the aftermath of Monday’s fierce winter storm in her yard north of Golden Prairie.

A noisy, potentially violent intruder briefly disrupted Maple Creek’s spring party.
Winter returned with a vengeance on Monday, making the end of March look like mid-February.
Wind-driven snow howled and swirled over the community, forcing temperatures down to -8 and making roads hazardous.
The public was urged to stay home and stay safe. Some businesses took a snow day, promising to be back today (Tuesday) with regulars hours.
On its Facebook page, the Town of Maple Creek announced that the landfill had been closed.
“Travel is not recommended at this time,” the post said.
Environment Canada issued a strong winds warning on Sunday evening, saying that severe wind gusts of 100 km/h were expected, along with heavy snow, blowing snow, and potential flash freeze conditions.
Visibility was likely to be reduced to near zero at times, while surfaces such as highways, roads, walkways and parking lots were expected to become icy and slippery.
Urban areas were warned about a significant impact on rush hour traffic.
“Winter has returned abruptly today as a strong low pressure system and cold front track eastwards across the central Prairies,” said Environment Canada yesterday.
“Mild temperatures and rain showers are quickly giving way to severe winds, heavy snow, and blowing snow this morning as the front passes by. Severe northwesterly winds gusting to 100 km/h have developed over southwestern Saskatchewan this morning and will expand eastward through the day.”
Environment Canada warned of sudden, significant reductions in visibility owing to snow and blowing snow, with the possibility of whiteout conditions at times.
“Meanwhile, temperatures will quickly fall below zero, leading to a rapid freeze of surfaces such as roadways and walkways throughout the storm. The worst of the winds, snow, and blowing snow will continue into the evening before finally easing through the night. Final snowfall totals of about 10 to 15 cm are expected. Conditions will continue to steadily improve through Tuesday as the low pressure system tracks off into Manitoba.”
People were asked to monitor alerts and forecasts issued by Environment Canada. To report severe weather, send an email to SKstorm@canada.ca or tweet reports using #SKStorm.