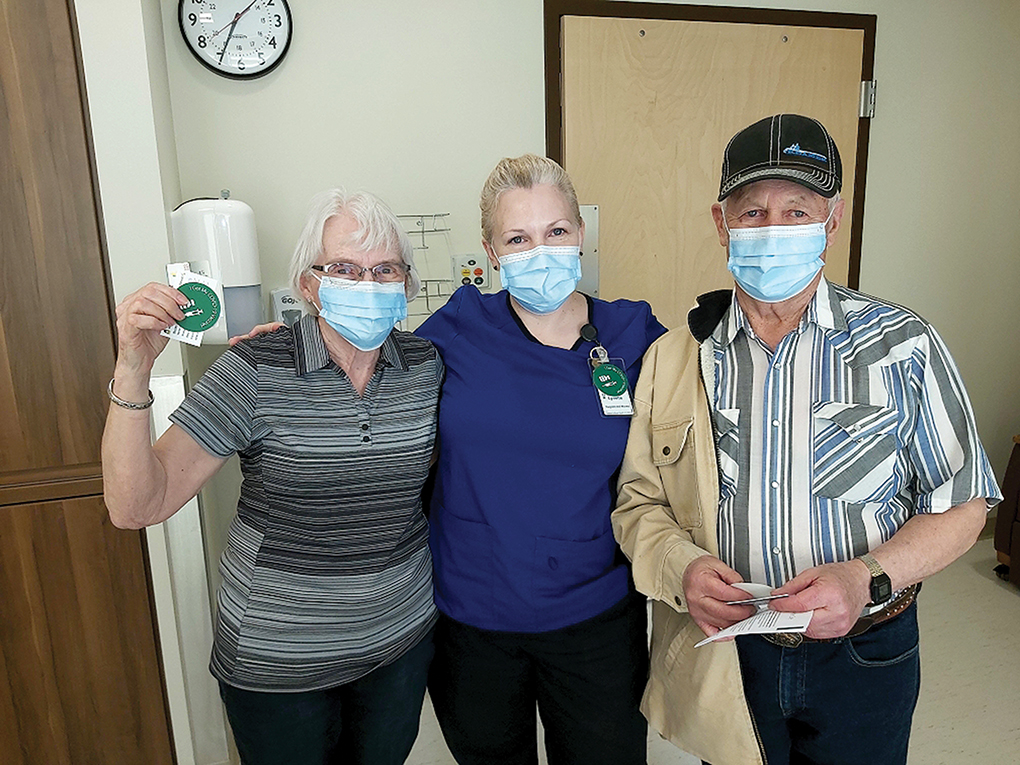 We are family: Lynette Brown RN, flanked by her parents, Tom and Marianne Eremenko, after she gave them their COVID-19 shots. Photo by Christine Christiansen

Lynette Brown has given more than 100 COVID-19 vaccinations so far. As a nurse, the procedure quickly becomes routine.
Two of the vaccinations, however, were far from typical. The couple who entered the vaccination clinic at the Southwest Integrated Healthcare Facility on Wednesday, March 17 had requested that Lynette give them their Moderna shots.
It would prove to be an unforgettable experience, for the couple were Lynette’s parents, Tom and Marianne Eremenko.
It could also have made a little bit of medical history in Maple Creek.
Lynette, who lives in Consul, has been a nurse for 24 years. She has never heard of another all-in-the-family vaccination, although it probably has occurred somewhere.
How did it happen here? By chance, she says.
She had signed up to help out at the clinic, starting in February, working in one of three vaccination teams. Each team had two nurses, one for administering a dose, the other for taking records.
Fate arranged for her parents, who also live in Consul, to be booked to attend the clinic on Wednesday, March 17, when Lynette happened to be working. Her partner that day was Kendie Bowyer, her niece.
The Eremenkos’ special request regarding the vaccinator made for an unforgettable moment.
“I did feel a little bit of extra pressure,” said Lynette. “I just hoped I wasn’t going to hurt them.”
She needn’t have worried. While Dad flinched a little bit, Mum acted as if nothing had happened. Neither showed any adverse reaction to their jabs.
Afterwards, the three posed for a picture taken by Christine Christiansen.
Lynette, who has received the Pfizer shot herself, said she considered it a privilege to vaccinate her parents.
“I was proud to be there to give them some protection against the virus,” she said.
Since then, Lynette has also vaccinated an aunt and uncle, so she has been getting used to family vaccinations.
Within the next four months, her parents will return for a second Moderna dose. Will Lynette be at the clinic to provide it? Only fate knows.
“At present we are trying to get as many first shots done, and give that little bit of protection,” said Lynette. “The longer between the doses, the better it is, the more effective the vaccine proves to be.”
Lynette, the first in her family to become a nurse (two nieces have followed her career path, including Kendie), is a strong supporter of vaccinations, urged everybody to get their injections.
Her parents were full of praise with how Lynette had conducted herself in the clinic.
“She did well,” said Marianne. “There were no nerves.”
She added: “It was neat to have our daughter give us the needle.”