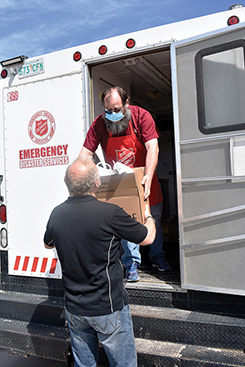 Started more than three months ago, the Sidney Street School hot lunch program has proved a sizzling success. Every Friday, staff and students have enjoyed such tasty fare as hamburgers, breakfast burritos, chicken, pizza pockets and grilled ham, always served with fresh vegetables.
The program was originally scheduled to end on June 25, but there is optimism that its lifespan can be extended, if funding can be maintained.
“We are looking at continuing it in the fall,” said Major Ed Dean, from The Salvation Army.
“It has been extremely popular,” agreed Rob Stewart, principal at Sidney Street School. “We are very hopeful that it will continue in the fall.”
The program was launched at the beginning of February after a partnership between the school and The Salvation Army, helped by major sponsors Agriculture and Agri-Food Canada, which provided $17,000.
An additional $4,000 came from the 2020 virtual Santa Shuffle.
Stewart said that the idea of the program was conceived as a way of building a sense of togetherness within and beyond the school, something particularly important during the COVID-19 pandemic.
“We all know the importance of feeding children nutritious meals,” he said. “The program supports healthy learning, and also creates a sense of community.”
On Friday, April 30, the News-Times went to The Salvation Army at about 9.30am to find out how the program was faring.
By that time, the building was already full of hustle and bustle.
Major Ed ran the show in the kitchen, with Phyllis Henderson’s support. In the room adjoining it, Nicolette Avery-Weitzel, a Salvation Army staff member, supervised activities. She was helped by Eva Keller, and, for a brief period, this reporter.
The objective was to prepare 149 meals, which would be taken in two journeys to the school. On the menu were meatballs and raw broccoli.
Three to four meatballs, cooked in a sauce, were placed in beef buns provided by Howard’s Bakery, an example of how the community has got behind the program.
By the end of the second run, 450 meatballs had been served.
“With each run we send 20 extra meals,” said Major Ed. The belief is that older children may have big enough appetites for more food.
Stewart and Shelley Huck, the vice-principal, greeted Major Ed outside the school on Friday and helped him carry the specially packed food inside well before the 12-1pm lunch break. Another deadline had been met.
Since February, the school has been getting children’s feedback on the program, trying to work out which are the most popular meals.
Stewart said there didn’t appear to be a consensus.
“Every child has a favourite meal,” he said.
Major Ed said variety was one of his aims.
“Every week we have a different meal.”
Come June 25 – the final Friday before the summer break – something celebratory is planned, although details have not been released. Could it mean ice-cream on the menu or tacos in a bag? Children will have to wait to discover the answer.
Major Ed said the program would not be possible without the hard work of volunteers like Eva and Phyillis and others. He described them as a backbone of the community.
“We are so grateful to the volunteers,” he said.