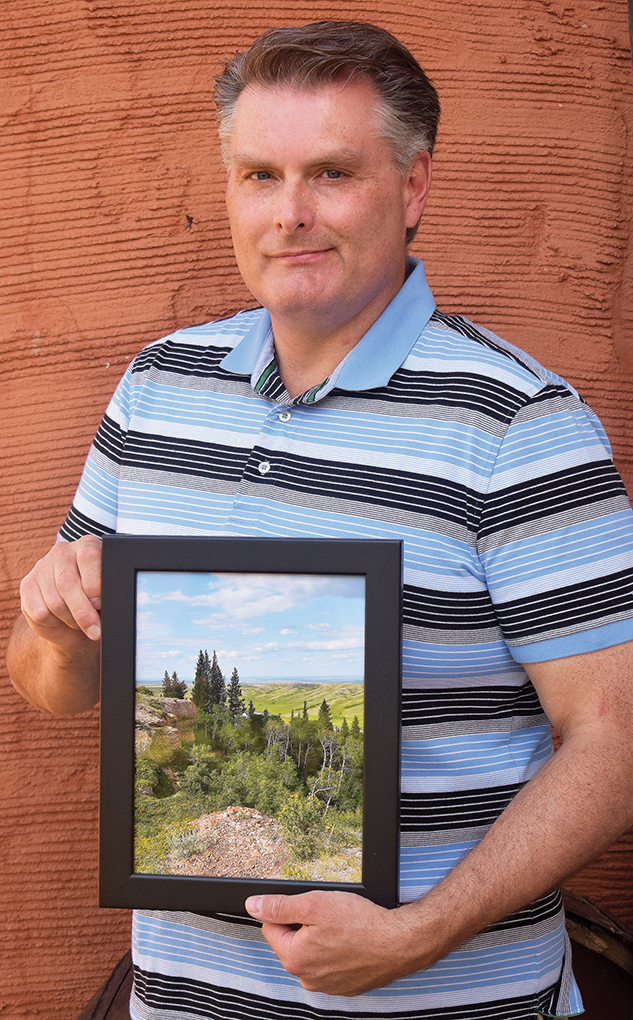 Royce Pettyjohn was surprised to learn he had been named the 2021 Maple Creek Citizen of the Year.

Royce was surprised. Kristin was so ecstatic she felt like crying. Melissa was excited for her hospital team, while Corrie exclaimed “fantastic” on behalf of swimming pool fundraisers. Then there were fire committee members, who preferred to let the image of their proud new Fire Hall do the talking.
Recipients of the 2021 Maple Creek Community Awards expressed a range of emotions after Blaine Filthaut, from the Chamber of Commerce, delivered the news in a series of phone calls last Friday.
Royce Pettyjohn learned he is Citizen of the Year, while Krew’s Gym, owned by Kristin Weiss, is Business of the Year.
Winners of three Community Awards are: the Southwest Integrated Healthcare Facility; the Swimming Pool Committee; and the Maple Creek Community Fire Department Committee.
The achievements mark a high point in a year dominated by the COVID-19 pandemic.
During separate award presentations on Tuesday, Melissa Schwab, hospital manager, represented the healthcare facility, while Corrie Scott spoke for the pool committee of which she is president.
Trophy artwork was a framed photograph of the Cypress Hills by Darlene Hoffer, winner of a Community Award in 2017. Special plaques will be fitted to each photograph.
Traditionally, award recipients are honoured at a gala evening in March at the C.M. Glascock Building. However, COVID-19 meant the cancellation of official ceremonies this year and in 2020.
Filthaut said the plan was for details of award winners over the last two years to be included in posters that will be displayed in business shop fronts.
Pettyjohn, park manager for Cypress Hills Interprovincial Park after serving as manager of Community & Economic Development for the Town of Maple Creek, said he reacted with surprise after receiving Filthaut’s phone call. He added it was nice to be appreciated by the community at large.
Weiss, who took over the gym on April 1, 2019, said she was thrilled to hear of the award, especially after the disruptions caused by COVID-19, which caused a five-month shutdown.
“We have worked so hard to make this place a better place,” she said, expressing gratitude for the support she has received from family members.
Schwab said COVID-19 had brought lots of changes throughout healthcare and in the community. These included mask-wearing, screening, visiting times reductions.
“People have adjusted very well and been very resilient,” she said.
She added that the award was an accolade for the whole hospital team, including physicians, nurse practitioners, RNs and LPNs (registered nurses and licensed practical nurses), clinic staff, administrators, nutritionists, house keeping, maintenance, therapists, Public Health and home care workers, EMS employees, and lab and X-ray technologists.
Scott was full of praise for how the community had rallied around the swimming pool cause.
Of the award, she said: “Fantastic. It’s great to be recognized.”

About Royce Pettyjohn who was recognized for work in heritage, tourism and economic development:
Royce Pettyjohn grew up on a cattle ranch in the Cypress Hills area southwest of Maple Creek.   While attending university he started a 20-year career with the Park Canada Agency, serving in various roles, including as the Site Manager for Fort Walsh National Historic Site. He later served as the Manager of Community & Economic Development for the Town of Maple Creek during the implementation of the Main Street Saskatchewan Program.   Then in June of 2019 he accepted the position of Park Manager for Cypress Hills Interprovincial Park Saskatchewan.
Royce is a Past President of the Museums Association of Saskatchewan, a Past Chair of the Saskatchewan Heritage Foundation, a former member of Tourism Saskatchewan’s “President’s Task Teams”, and the Past Chair of southwest Saskatchewan’s Destination Marketing Organization; Cypress Hills – Grasslands Destination Area Inc.
Royce also served over 20 years as a member of the board of directors for the S.W. Sask. Oldtimers’ Museum & Archive here in Maple Creek.
Royce’s work in heritage, tourism, and economic development has been recognized with the “Economic Development Professional Award” from the Saskatchewan Economic Development Alliance, Tourism Saskatchewan’s prestigious “Tourism Builder” Award, the Saskatchewan Centennial Medal, and the Queen Elizabeth II Diamond Jubilee Medal.
Royce has been honoured to speak about Maple Creek’s successes in the areas of heritage conservation, tourism, and economic development at numerous provincial and national conferences, including at three conferences of the National Trust for Canada.
In looking back at the community projects in which Royce has played a role over the past 30 years, some of the most memorable for him have been the rehabilitation / construction of the Log Museum complex, the rehabilitation of the W.R. Orr Building, the rehabilitation of the C.M. Glascock Building, efforts to save the Maple Creek Armoury, the designation of the Maple Creek Heritage District, the launch of the Maple Creek Heritage Festival, the re-opening of the Trans-Canada Visitor Reception Centre, Maple Creek winning the Communities in Bloom National Championship, the implementation of the Maple Creek Main Street Program, and Maple Creek being awarded the Prince of Wales Prize for Municipal Heritage Leadership.
Royce is deeply moved by having been both nominated and chosen as the recipient of “Maple Creek Citizen of the Year”. He feels blessed to have been able to work with so many talented individuals and committees over the years, without whom nothing would have been possible.