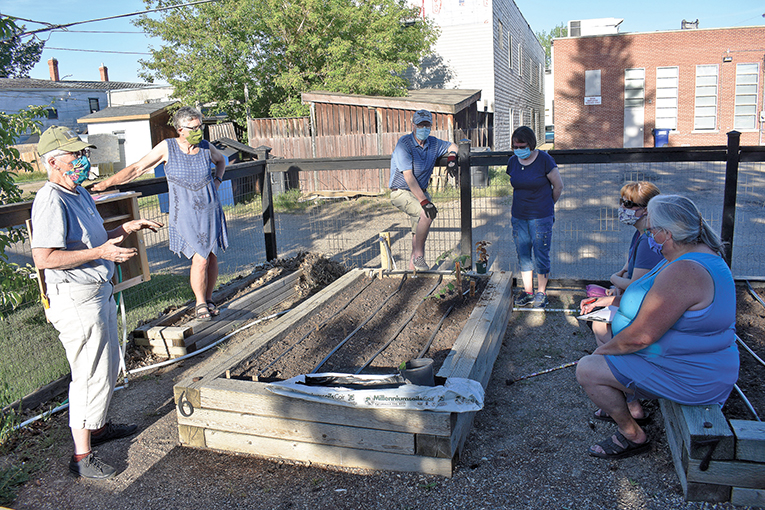 Turning 10 is always a big deal, even for a community garden.
What better way to mark Maple Creek community garden’s double-digit milestone than with a new and improved watering system?
The drip irrigation system, which will reduce garden water usage by up to 70 per cent this year, took 35 volunteer hours to install.
Many of those hours were put in by Denise Needham, who designed the layout, acquired the materials, and put everything together.
Last Wednesday evening, under brilliantly sunny skies, Needham, helped by Kathy Carter, ran a demonstration to a group of gardeners.
Present were Sally Chant, Debbie Lambert, Tom and Linda Magnusson, Maggie Marshall, Judy Thornton-Matthews, Linda Kapasky, Bernadette Chmilar and Holly Gutfreund.
Savannah Mass, the Town’s communications and tourism manager and a member of the Communities in Bloom steering committee, was also there, taking photographs.
Needham briefly explained the background to the new system.
“I made it work for me and shared it with Sally (Chant), so that’s how this got going,” she said. “I volunteered to install all of it.”
She added: “I’ll answer any of your questions and I’ll do all the maintenance for this first year, for sure. The only thing you need to know is how to access water.”
Needham called on Carter to turn the system on for two hours, saying it wouldn’t be operated again until Friday, from 6am to 8am.
She urged people to give feedback, informing her about water quantity.
“Is it enough, is it too much? Let us know because we can change it.”
She asked gardeners to go to their beds.
“The valves have all been opened up. I have already tested it, and you will see the water come out.”
Needham recommended that gardeners give their valves one, or one and a half revolutions.
“Drips to come by second,” she said.
Afterwards, Chant, community gardens lead and CiB steering committee, said the water savings of drip irrigation are well known.
“A number of local residents use drip irrigation systems in their own gardens,” she said. “So, we had gardens to look at and local gardeners to consult.
“Next step was the approval of the Communities in Bloom steering committee and the support of the Town to install a drip irrigation system. Mission accomplished.” Chant said that once the proposed design was approved, a work plan was drawn up, and plumbing supplies ordered.
C & D Pure Air donated many of the parts – such as taps, T’s, elbows, and adapters.
:A big shout-out to Colin Orr for his contributions and advice.”
Chant also thanked Needham, who put in the lion’s share of volunteer hours installing the system.
“As the saying goes, ‘we don’t pay our volunteers … because they are priceless!”
Chant said gardeners were excited to attend the demonstration.
“Hello to consistent and efficient watering directly to the soil in each bed, all regulated by a water timer.”
She added: “Maybe you have to be a gardener to get excited about a flat black hose that emits a drip of water per cent – but we were all very excited when the tap was turned on.”