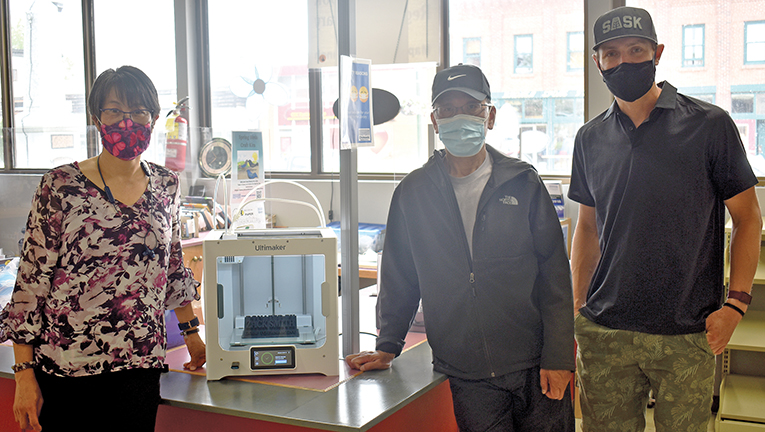 Still think libraries are solely for taking out books? Well, think again.
They are so much more than that, as proven by a state-of-the-art piece of technology now available to Maple Creek Library patrons … a 3D printer.
3D printing is the process of creating three dimensional solid objects from a digital file. Material is added, layer by layer, to make a final object. The technology has been used for such things as jewellery, aerospace and sport-footwear industries, glasses and eyewear, model making, healthcare, architecture, dentistry, prosthetics, and sculptures..
On Tuesday morning, the 3D printer, about the size of a microwave oven, was officially unveiled by Maple Creek branch librarian Violet Wong.
The presentation was attended by Zack Smith, the town’s most famous sporting hero, now a player with the Chicago Blackhawks.
It was the Zack Smith Charity Golf Classic that contributed funds for the printer, which cost about $5,200.
Smith, who has been staying in a family cabin at Beaver Flat, a resort village about a two-hour drive north of Maple Creek, said he was excited to be at the presentation. 3D printers are big now, and would be even bigger in the future, he said.
Provoking laughter and a few wry smiles, he said that his two-year-old daughter, Rae Siena, had attended early learning sessions, which were soon followed by a coding class.
“It’s cool that the printer will be accessible to the public,” he added.
Also at the ceremony were Dave Eng, Zack Smith golf tournament organizer; Ashley Booth, rural branch manager of Swift Current-based Chinook Regional Library; library board members Kathy Carter and Lauren Winsor, who came with her daughters, Elena, 6, and Avah, 3; and Richard Guenther, a neighbour of Violet.
In preparation for the presentation, Wong put the 3D printer to use – creating a plaque with the words, “Donated by Zack Smith Golf Tournament.”
It took 17 hours to make. The process was completed shortly before Zack Smith left the building, but the plaque was literally a little too hot to handle.
Wong finally managed to prize it out of the printer, before running outside to show it to Smith on the Jasper Street sidewalk.
Earlier, Wong said that her goal, and the Chinook goal, was for libraries to be more than about withdrawing books. She wished to increase the activities and services offered by a library.
The generous donation of a 3D printer tied in with this ambition, she said.
“I want to get more children, more students involved.”
Wong said she still had a lot to learn about using the 3D printer.
Booth said rural community libraries were fortunate to have such a piece of technology.
“You can find solutions to problems you never knew you had,” she laughed.
Smith said he was glad that the tournament bearing his name was able to help. He pointed out that he liked to get involved in projects outside hockey.
“This is an awesome idea.”
The Zack Smith Charity Golf Classic was initiated and organized by Don Lewis and Dave Eng in 2010, with enthusiastic support from Zack Smith.
Since its inception the event has contributed more than $300,000 to the southwest community. Here are some of the beneficiaries:
The hospital, golf course, Minor sports, Horizon House, Figure Skating Club, Jasper Cultural Centre, New Swimming Pool Fund; Consul Rink Board; Consul Playschool; Consul Hall Board; Consul Youth Travel Club.
2019 marked the 10th anniversary of the event. Although organizers decided to call it a day, Smith this week hinted that a reprise of the popular tournament was possible over the next few years.
“I wouldn’t rule it out,” he said.