Consul’s champions: Teens qualify for nationals in US 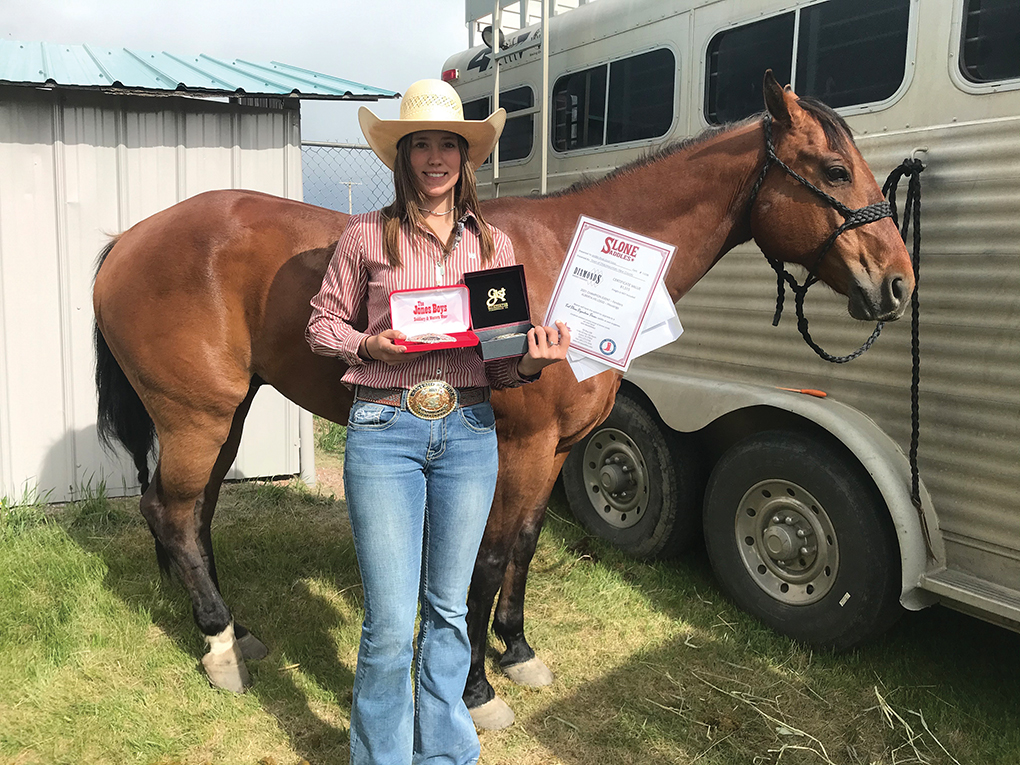 Picture the setting: a prestigious arena, cameras and eyes trained on you, the best young rodeo competitors in the area battling it out, qualification for the nationals in the United States at stake. To the unwary, inexperienced, or over-anxious the pressure-cooker atmosphere could be overwhelming. Two Consul teenagers, however, thrived in the heat of such competition, emerging as champions at the Alberta High School Rodeo (AHSR) Finals.
Eighteen-year-old Braden Brost won the tie-down roping, while Paige Tully, 17, topped the goat tying event, each competing in three rounds on separate days, earning a bunch of buckles and saddles.
“I was really excited, but anxious going into the last round, since so much depended on it,” said Braden.
He added that he was aware of the crowd while sitting around before the start, but when he entered the arena it was a different story.
“As soon as the event starts, you forget everything going on around you. Overall, it was a really good weekend.”
To add to Braden’s excitement, he and his 15-year-old brother, Rylan, were runners-up in team roping, justifying the years of hard work they put into the event, continually motivating each other.
Paige experienced similar feelings of elation.
“I was speechless after winning,” she said. “I was so excited.”
She recalled the high emotion of seeing her mom afterwards, and the outpouring of family joy.
Braden and Paige’s success meant they qualified for the July 18-24 National High School Rodeo Finals in Lincoln, Nebraska, which will feature up-and-coming rodeo stars from the US and Canada. Rylan also booked his place, courtesy of his second place in team roping.
Two other area contestants, Shay Erickson and Levi Munsch, just missed out, coming 5th in team roping.
Unfortunately, Paige won’t be joining the Brost brothers in the nationals. She will be getting ready to go to New Mexico State University in the middle of August to study early childhood education.
The AHSR finals took place at the Olds Regional Exhibition grounds between June 3 and 6.
It is the pinnacle of the provincial high school rodeo season, which runs from April into June.
Spectators were limited to close family members. Parents and siblings were allowed in, but grandparents were not.
Braden’s parents, Darryl and Jamie, were near the action, grabbing photographs.
As a three-time qualifier for the nationals, Darryl knew all about the demands of provincial competition, which saw Braden pitting his wits and skills against 29 other aspiring rodeo stars.
“As a parent, I got nervous,” he said. “I was probably more nervous than Braden. In fact, I was nervous for both my sons.”
That tension did not let up through the three days, even though Braden got off to a terrific start, achieving times of 10 seconds and 9.1 seconds. It meant that he was comfortably ahead going into the final round.
The mission now was clear: avoid risks, avoid a disaster, and he should be fine.
And so, it proved. His 12.4 seconds was enough to secure victory, with a points total of 201. His nearest rival came second with 141 points. 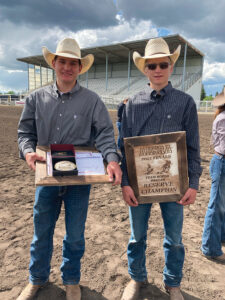 “Braden was pretty pumped afterwards,” said Darryl. “He got a whole bunch of buckles and two gift certificates for saddles. He also won the high point ­­– that goes to the person who got the most points.”
He added: “Overall, the finals are a good experience. It teaches you many things, such as how to lose, which is important.”
Competing in the nationals, however, is a “whole different deal”, said Darryl.
“There are thousands of kids taking part. I remember meeting kids from Texas and Hawaii. There are not only the rodeo events happening, but concerts, trade shows and things like that.”
Darryl is uncertain whether he will be going to Nebraska.
“I would like to go, but as a rancher it is hard to get away,” he said.
Braden, who is about to graduate from Consul School, is looking forward to testing his skills against tougher opposition.
“I’m pretty excited about going to nationals,” he said. “To be able to compete at that level should be a really cool experience. Going with my brother will make it even better.”
Despite his youth, Braden is already a seasoned practitioner of tie-down roping and has learned not to become overawed by the big occasion.
“I’ve been doing it since 4 or 5, ever since I could swing a rope. I started competing in amateur rodeos, and even did team roping with my dad.”
What is so appealing about tied-down roping?
“I like different aspects of tie-down roping. So much happens, and it takes a lot of practice. It’s a lot of fun. There’s nothing better.”
Braden’s best time is 8.0, achieved at a spring rodeo in Alberta. But it is hard to compare that with the 9.1 he got at provincials since so many different factors come into play.
“I also enjoy team roping with Rylan and we practise a lot together. We are always trying to be better and to keep improving.”
The brothers scored 167 points at the provincial finals, with times of 7.2, 17.2, and 12.6.
After nationals, Braden plans to take a two-year construction technology course in Casper, Wyoming.
“I’m going to continue doing rodeos and ranching,” he said.
Paige Tully, who also goes to Consul School, has been goat tying for around 8 or 9 years.
Like Braden, she comes from a rodeo background. She credits a high school friend, Taryn Parsonage, with teaching her and younger sister, Brette, how to tie goats.
Now they are hooked, practising each morning before going to school. What is so special about it?
“It’s the adrenaline, it gets you going,” she said. “It’s a lot of fun and I do it every day.”
All those early morning practice sessions paid off, with Paige getting better and better over the weekend, recording times of 8.9 second, 8.0 seconds and … 7.4 seconds, her best ever. Her total points tally came to 176.50.
She won a buckle, provincial championship buckle, and custom-made saddles.
“I was nervous because I knew the top four got to go to Nebraska,” she said. “I just wanted the last round to go as smoothly as possible.”
Fourteen-year-old Brette also did well, coming seventh, with times of 7.9, 14.8, and 8.8. Her points total was 115.50.
There to cheer them on were their parents, Bryan and Denise, and younger brother, Nate.
As with Braden, she managed to block out the noise while competing.
Paige also took part in team roping, pairing up with Jasey Barnett, a friend from Sundre, Alberta. Despite enjoying an excellent season, they missed out on a top-four finish.
Although Paige isn’t going to Nebraska, she still intends to compete in the Canadian High School Rodeo Finals in Swift Current between August 6 and 8.
AHSR chair Patricia McKean of Cremona was happy with the way the finals went, despite the occasional rain.
She said the young cowboys and cowgirls had worked hard to reach the finals during a tough year.
McKean estimated up to 30 volunteers helped stage the finals, which were subject to COVID-19 protocols.