Mary Borneman, 108: an inspiration to us all 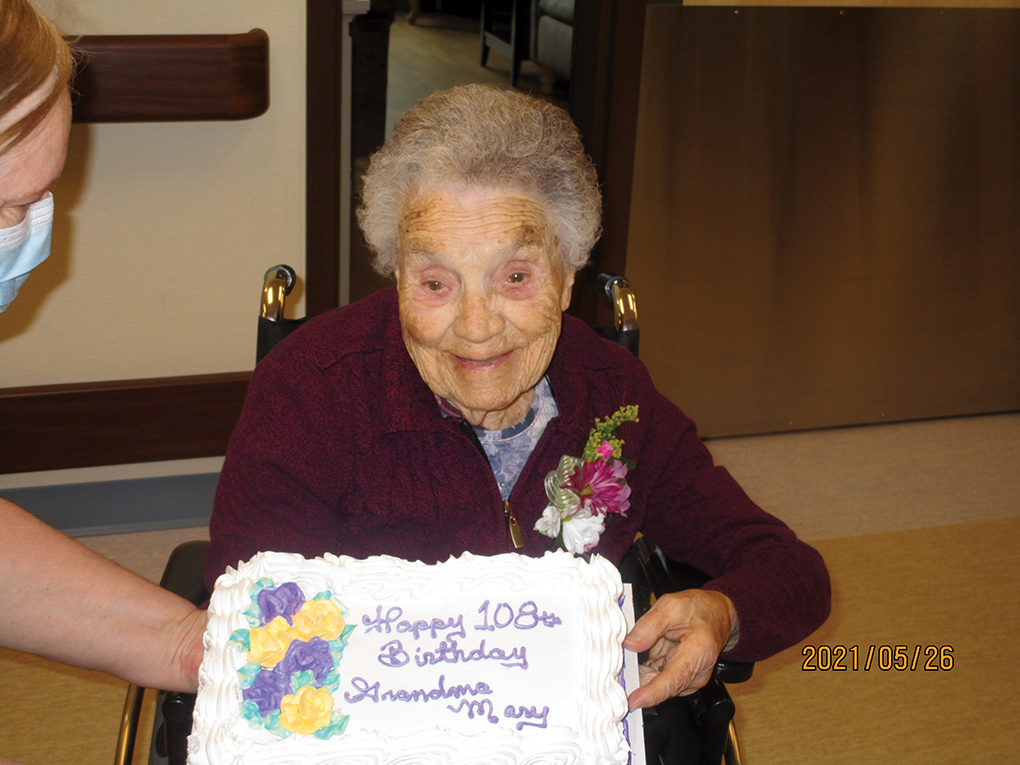 Even in Maple Creek, 108 is an impressive age.
Correction. Let’s make that an amazing age.
Mary Borneman, who stays at the long-term care facility at the hospital, reached that rare milestone on May 26.
To mark the occasion, there was a small gathering to wish Mary a happy birthday. Two cakes were delivered, one bearing the words in icing “Happy 108th Birthday, Grandma Mary”, the other was for “residents and staff”.
Among those present was Mary’s son, Tracy, who couldn’t be prouder of his mom.
She said his mom still enjoys good mental and physical health, considering her age.
Nobody could say Mary Christina was brought up in privilege and wealth.
Weighing 6lb she was born in a tarpaper shack on May 26, 1913, shortly before the First World War.
She was the seventh child of eight girls and five boys born to John and Alma Sunde. The family farmed southeast of Maple Creek in Murraydale, living on top of the hill on the area where the Murraydale Stampede is now held. When she wasn’t milking cows, Mary liked to curl and play baseball. Dancing was another big interest.
She finished Grade 8 at Hay Creek School in about 1928.
Before she got married, she did housework for an elderly couple, earning $10 a month – a wage that seems a pittance these days.
It was at a dance that she met Norman Borneman, who was 10 years older than her. They hit it off and began a four-year courtship.
On October 7, 1935, they got married. Their first home was a one-room shack (a boxcar) at Bassano, Alberta. After living in the Medicine Hat area for a year while Norm worked for a rancher, the couple moved back to Maple Creek and settled on a farm 12 miles southeast of town and built a log house.
Mary and Norm had a daughter, Shirley, as well as a son.
In 1980, the couple sold their farm to Shirley and retired to Maple Creek. Norm passed away in 1987.
Interviewed for her 100th birthday, Mary told the News-Times that she believed the key to a long and healthy life was to keep active and busy.
“Eat well, sleep well, have a good time and live your life. That’s what I did, and I do it yet,” she said.
As well as gardening, she kept her mind active with sudoku puzzles, reading and playing cards.
In that interview eight years ago, she said that one aspect of modern life that concerned her were advances in technology. She preferred a time when people found their own entertainment in each other’s company.
“I think the world’s going too fast,” she said.