All together now: MCCS graduates pose for a group photo after receiving their graduation scrolls in a ceremony last Friday.

For the 38 class members of 2021, it was a year that severely tested resilience.
COVID-19 posed multiple challenges, disrupting activities inside and outside the classroom and forcing students to adapt to online learning. As with the rest of the community, they had to live with a new reality of mask-wearing and social distancing.
Last Friday, however, was all about celebration of youthful achievement. It was also a chance to reflect, often with humour, and look ahead with optimism and excitement.
Graduation Day saw people line the streets to cheer, wave, and hold up placards and pictures during a parade of 35 Maple Creek Composite School graduates, who were seated on truck-pulled trailers.
One or two motorists even honked their horns.
It is the second year running that the community has had a chance to join the celebration.
Under sunny skies and in warm temperatures, the procession started at 5pm from the golf course, with Constable Adam Helgeson leading the way in an RCMP car, its lights flashing.
Several dresses caught the eye, drawing comments from onlookers. Who could not be struck by the dazzling red of Noime Ortizo’s attire? Or the other dresses of turquoise, primrose, and cobalt blue?
The route covered 5th Avenue, part of Highway 21, the Southwest Integrated Healthcare Facility, 4th Avenue, Jasper Street, Pacific Avenue, and Sidney Street, looping back to the golf course.
Some people sat in recliners and chairs, others lay on the grass as the procession passed. Occasionally, candy was thrown to children, creating a carnival atmosphere.
At the long-term care facility, trailers paused near the gates, while graduates stood and waved. Constable Helgeson kept the pace slower than last year’s parade, allowing much greater interaction between graduates and townsfolk.
Cypress Lodge residents were gathered on the grass in front of the facility, sitting in green chairs like the front-row audience at a theatre.
The loudest cheers came in Jasper Street, when a group, presumably of family members, called out to John Fundal, holding up a poster bearing his picture and the words: “I’ve spent over a 100,000 hours of my life for a paper and a handshake.”
Cellphone cameras were held out to record the moment that John passed.
As last year, the Cypress Credit Union staff distinguished themselves with their spirited reception, shaking hand clappers and brandishing “Congrats Grads” signs. One sign read “Con<<Grad>>ulations class of 2021”.
Shortly after 6.15pm, the procession turned into the golf course and stopped in the parking lots outside the Community Arena.
Hours earlier, a more muted celebration had taken place in a field off Louis Avenue, next to the main school building, which had been decorated in a Hawaiian theme. This ceremony for graduates and parents featured a “grand march” and the presentation of scrolls.
After Belinda Guckert, a teacher’s aide, had sung “O Canada”, Tyson Krause, MCCS vice-principal, delivered a treaty recognition, and John Campbell, the principal, gave a short welcoming address.
He spoke of the challenges that the Class of 2021 had been forced to face.
“They are like a middle child sandwiched in between the development of a pandemic, feeling the full impact of the pandemic and then in our near future the relinquishing of restrictions and kind of a back to normal. If this graduating class doesn’t know what resilience is, they do now. So, we are here to celebrate, to share with them this day.”
Campbell looked forward to the community parade, hoping people could “whoop it up” with the graduates.
“If there is a class that deserves some whooping up it is the class of 2021,” he said.
To music from DJ Landon Bertram’s sound system, 35 graduates were then invited, one by one, to walk around the field to receive a graduation scroll from Jennifer Eiserman and a rose from Tracy Walkow. The roses had been donated by Nola Sanderson, from Kelli Dee Floral.
After the so-called grand march, the spotlight fell on “historians” 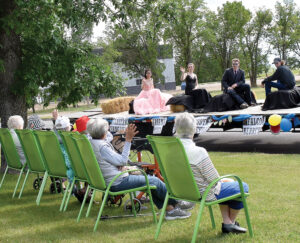 William Knight and Amera Mulatz, who shared some of their favourite memories of the Class of 2021.
In his closing remarks, Krause hailed the Grade 12s for raising $12,946 for a new Maple Creek swimming pool. Despite COVID-19, he said, they had found “positive and safe” ways to raise funds, such as taking cans to SARCAN.
Krause went on to applaud businesses that “adopted” a graduate in the weeks leading up to Graduation Day. Under the program, businesses had drop-off boxes into which people could post cards of congratulations to a particular graduate.
“More businesses signed up than we had for grads,” said Krause. “It’s great to see how supportive our community is.”
Krause also thanked business that sponsored awards for the graduates. The winners, he said, would be announced in a virtual graduation ceremony to be shown later that day.
He added that the community had proved a big hit last year, and thanks once again should go to families and business that donated trailers and trucks.
Krause continued by saluting the Town Council for approving the parade route and erection of barricades, as well as graduate parents who had been so supportive of the plan.
“Thanks also for the Grade 11s and other MCCs staff who helped with decorating grad boxes for businesses and setting up this outdoor venue. It has a nice Hawaiian theme. They did a really great job.”
In conclusion, Krause congratulated the Class of 2021 for coming through such a tough year.
“On behalf of John and myself and the rest of the staff, please enjoy your summer. Good luck with your future endeavours and thank you all so much for coming today. Have a safe summer.”