Brad Wall’s classic connection with a US country music legend 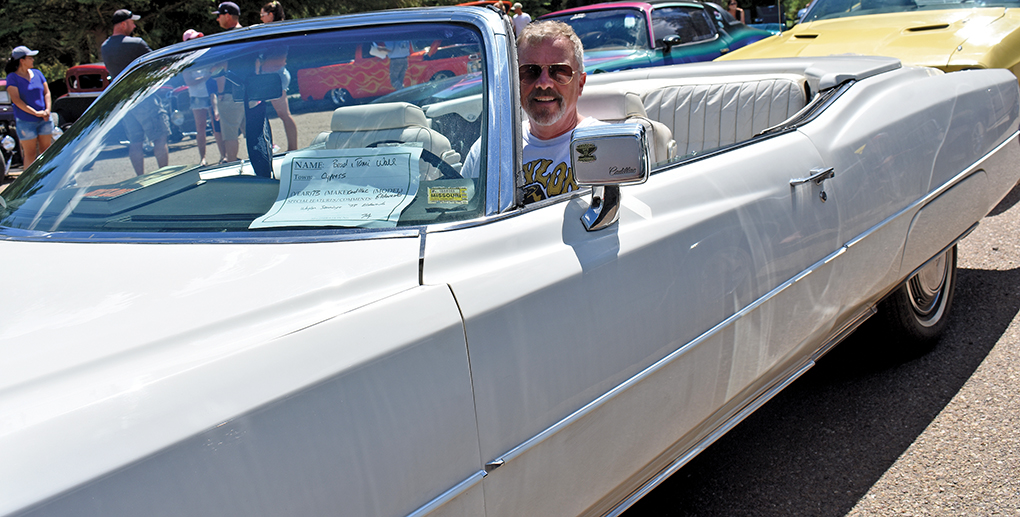 Waylon Jennings was a big fan of cars, Brad Wall is a big fan of Waylon Jennings.
Put those two loves together, and you have an explanation as to why Wall was showing off Waylon’s 1973 Cadillac Eldorado at Saturday’s car show at Cypress Hills Park.
How did the 14th Premier of Saskatchewan come to acquire this piece of music and automobile history?
About six years ago, he learned of the car through his son Colter Wall, a singer-songwriter who travels in the same circles as Jennings’ son, Shooter. The opportunity to buy it was too good to pass up, even though the 18ft 3 inch-long convertible was not necessarily his favourite type of classic car.
To raise money for the Cadillac, he ended up selling his 1967 Dodge Coronet, but it was well worth the sacrifice.
“I’m a huge fan of Waylon Jennings,” Wall told the News-Times.
His appreciation of the country legend was apparent from the music coming through the sound system during the show.
The history of the car makes interesting reading. Jennings’ label, RCA Records, bought the singer the car to celebrate the 1973 release of “Honky Tonk Heroes”, and “Lonesome, On’ry and Mean”. The country legend put about 50,000 miles on it before giving it to his son, Buddy.
Jerry “Jigger” Bridges, one of Jennings’ bass players who still performs with Shooter, also owned it for a while.
Before buying the car, Wall asked Bridges whether it was really Waylon’s. The reply was: “Yes it is … and I want it back.”
Jennings’ long-time personal assistant and family friend, Maureen Raffety, then emailed Wall about the Cadillac and Waylon’s love for cars.
“He definitely drove it many times, it was garaged at the house on Old Hickory Boulevard. Waylon loved cars, he had many different ones, and would often trade out what he drove, but was always most fond of his black Cadillac. He did have a yellow, an orange, a gold Cadillac, as well as the white and a baby blue Cadillac. The Eldorado was his favourite body style.
“He also had a black corvette, a maroon coloured Jaguar, which he gave to his lawyer, 2 black Jaguars, of which I was the recipient of one of them and I still have it and drive it daily …”
Wall said he and his wife, Tami, who live year-round in a cabin at the park, were honoured to share the story of the Eldorado.
“I’ve always loved old cars,” said Wall. “Generally, I’ve only owned one classic car at a time.”