Driving a community together

It was 15 years ago that the McMillan family started the Reno Rodders Car Club in Consul.
Since its founding, the club’s annual “show and shine” has become a highlight in the community calendar, its appeal extending far beyond classic car enthusiasts.
“The show is good for the community, bringing everybody together,” said president Chris McMillan, who founded the club with his dad, Larry.
Even though he now works in Medicine Hat, Chris still sees Consul as home and the car show as a great opportunity to reunite with friends and catch up with local news.
The tiny village in the Rural Municipality of Reno No. 51 – hence the name of the club – may only have a population of about 73, but there is always plenty going on, or at least plenty to talk about.
Go to Larry McMillan’s diner on a Sunday, and you will find the equivalent of coffee row.
“It’s really a man cave,” Chris laughed. “It’s been decorated to look like a diner from the 1950s. People gather there on a Sunday for coffee.”
Chris was speaking after Saturday’s show, which saw more than 40 vehicles, from a 1928 Dodge to a 1940 Willys Deluxe to a 2018 Camara SS, displayed on grass next to the rail track. Nearby was the village’s biggest landmark, one of the last existing grain elevators in the region.
The easing of COVID-19 restrictions, said Chris, had come just in time for the event and created a sense of celebration, aided by glorious weather, a breeze softening the scorching rays of the sun.
Adding to the community spirit was a street fair, across the highway, which attracted a steady stream of visitors. One of the vendors was Nicole McNaughton, who was selling her homemade signs. She started making them two years ago as a hobby, using wood and chalk.
“Lots of people came today,” she said.
McNaughton works as an education assistant in Medicine Hat, but her roots remain firmly in Consul.
The festivities continued the next day, with the Southwest Cruise Poker Run. Draws took place in Consul, Eastend, Shaunavon, Gull Lake, and Maple Creek, the poker run map covering about 240 kilometres.
For anyone interested in the style, sleekness and glamour of classic cars, the “show and shine” at 115 Railway Avenue was the place to be. There were no restrictions of year, make, and model.
The McMillan family’s passion for classic cars was well represented in the 11am-4pm spectacle. However, as Reno Rodders members they were ineligible for awards.
Winners of the much-treasured “People’s Choice” award were Eric and Gina Lee, whose orange 1970 Dodge Super-Bee caught spectators’ eyes.
It took five years to restore the vehicle to its pristine glory, replacing lots of metal. However, the main joy for the couple comes from the stories their car generates.
“We love hearing the stories,” said Gina. “Everybody has a story about their Dodge.”
One of the oldest models on show was Glen Miller’s 1928 Dodge, the result of four years of working on two “rusted lumps” found in a field. What was a four-door vehicle, was reduced to two doors. Some modern features were also added, including a sunroof.
“I’ve been interested in cars all my life,” said Miller. “It’s fun. I enjoy the creative element of building them.”
His words would probably have resonated with every other exhibitor.
Wayne Wilson’s 1960 Monarch Richelieu two-door hardtop cruiser was another example of an abandoned vehicle being revived.
His connection with it goes back to 1991 when he bought it from Don Shaver for $100. He sold it in 1994, but came across it again in 2017 sitting in a pasture, minus a motor and transmission. Now it has been brought back to life, even boasting the original blue paint.
Dennis Ghiglione had a similar story to tell about his 1978 GMC Diablo. He bought it 12 years ago from a friend after it had been sitting idle in a barn for 30 years.
The machine, fitted with air conditioning, is now super easy to drive during summer, he said.
Shortly after 3pm, people were invited to attend the presentation of awards, and raffle and door prizes. It was the moment when the Lees were handed a “people’s choice” plaque.
Signs that the show was ending could be heard, as much as seen. Engines revved, croaked and gasped, and exhaust fumes bloomed in a cloud of spins and slaloming manoeuvres.
It was a classic car enthusiast’s way of saying farewell. Until next year. 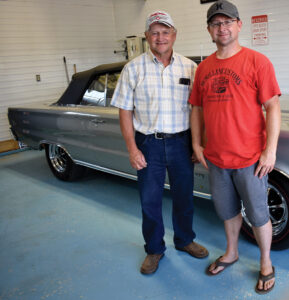 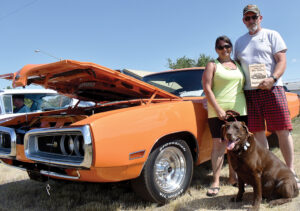