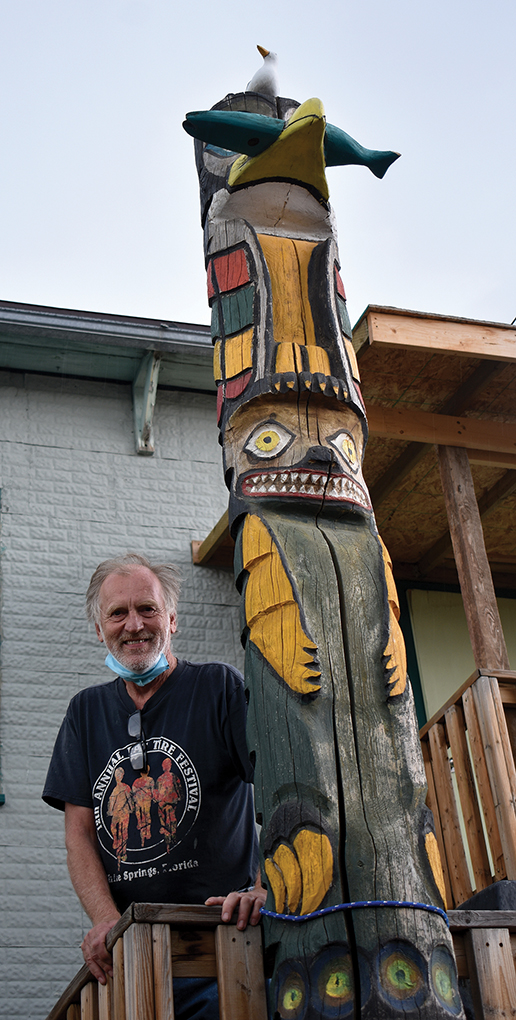 Three bears, two salmon, a frog – and a bird or two – have taken up residence in the courtyard at the back of the Broken Spoke Fine Art Gallery.
They form the carved elements of a 15ft Totem Pole now towering over the wooden fencing.
The monument was put up on Canada Day (July 1), in honour of the Indigenous community and at a time when the country reflects on the horrors of residential schools.
For the last three or four years, the cedar Totem Pole has been displayed on its side near the front of the gallery. Moving an object of such spiritual significance required permission from the owners, along with appropriate rituals,.
“We did have a smudging and cleansing ceremony,” said Blaine Filthaut, gallery owner, who was keen to thank Montgomery Roofing and the Germain family for placing the pole in its new location. Filthaut said the pole belonged to the estate of Gary Germain, an adventurist and traveller from the Maple Creek area.
“Germain had the Totem Pole made at the time his oldest daughter, Muriel, was pregnant in 1986,” he said. “It was initially erected at the Willow Bend Campground mini-putt area at the time Germain was owner.”
The pole makers were from the Tsimshian tribe, who are part of Haisla Nation just north of Haida Nation on the British Columbia coast.
It is believed, said Filthaut, that two youngsters did the carvings under the guidance of a Master.
“There has to be perfect symmetry between both sides,” said Filthaut.
At the centre of the monument is a ring of depressed blue and yellow circles, which represent the carvers’ imprints, the equivalent of signatures.
The three bears represent Gary Germain’s daughters: top, Muriel (pregnant); middle, Diane (husband is native); and bottom, Della (youngest tries to change dad for the better).
“The pole is apparently a healing pole as along with the three bears are three healing elements, which are two salmon and the frog,” said Filthaut.
He added that atop the monument is either a raven or thunderbird. Gemain then apparently added a white bird – not part of the original carvings.
“The pole is on consignment at the gallery,” said Filthaut. “It is for sale for $9,000.”
Moving the pole comes as Canada confronts a deeply troubling part of its history.
Recently, more than 1,000 unmarked graves have been discovered at former church-run schools where Indigenous children were sent as part of a campaign to strip them of their cultural identity. It led to calls for the cancellation of Canada Day.

One response to “Honouring the Indigenous community”