Ride on … David has his own wheels again 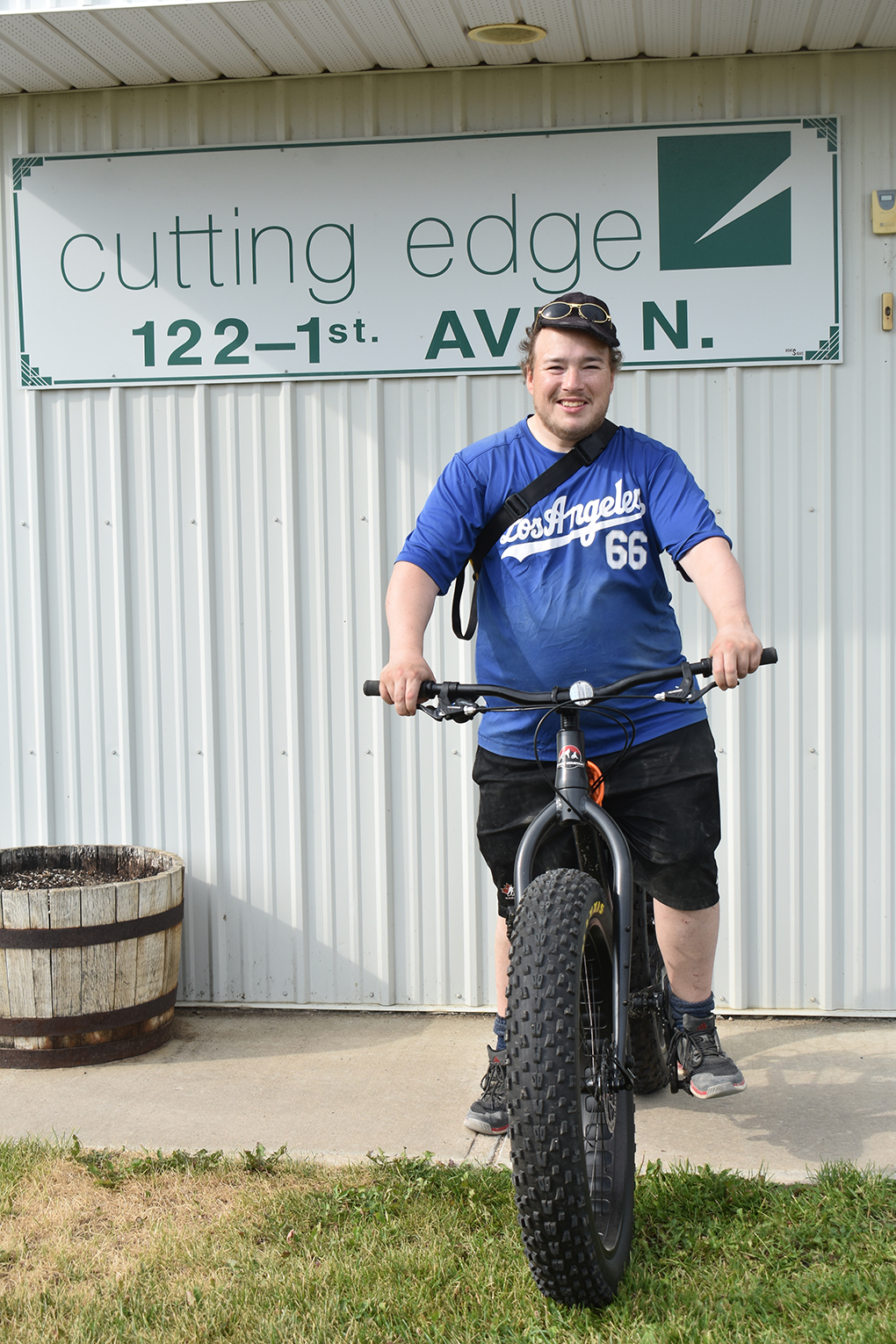 David Gordon is delighted with his new bike which has thick Maxxis tires.

When David Gordon’s bicycle was stolen from the garage at his home, he lost more than his main mode of transportation. He lost part of his freedom, part of his independence.
His wheels took him year-round to and from Cutting Edge, where he has worked more than 16 years. They took him to the grocery store. They took him along summer roads, just for the joy of riding.
It was a bleak day at the end of May when the thief, or thieves, struck. Now, however, David’s big smile is back … thanks to a big community fundraising effort that has landed him a stylish new bike, complete with a lock.
“It’s nice that the town would do something like that,” he said last Friday after finishing his work day. “That kind of generosity comes from the heart.”
The fundraising campaign was kick-started by Tonie Shea, from Mama T’s Catering & Events, after David’s sister, Teena Marie, reported the theft on Maple Creek Lost, Found and Missing’s Facebook page.
Tonie commented that if the bike wasn’t recovered she would like to help David get a replacement.
Her post triggered an immediate response; donations began tumbling in, far more than anticipated. Cash, e-transfers, whatever – hearts everywhere, it seemed, were touched by David’s story.
“I am loving this community more and more every day!!” Tonie posted. “Way to step up to help Maple Creek.”
Teena Marie was also overwhelmed.
“Thank you for all that the community has done for my brother …” she said.
The outpouring of generosity led to nearly $1,900 being raised – $1,570 of which was enough to buy David a new bike from a shop in Swift Current, plus a lock.
“I would like to thank everyone in the community for their support,” Tonie told the News-Times last week.
Ken White, who helps Tonie run Mama T’s, said the community went above and beyond what was anticipated.
“People who don’t even know David donated.”
He added that Blythman had a plan to insure the new bicycle. It appears that David has the option of buying tenant insurance, approximately $200 a year.
David, who had been loaned a bike by a neighbour after the theft, told the News-Times that insurance was well worth considering.
As he got on his bike, David’s face glowed with happiness. He proudly pointed to the thick Maxxis tyres.
“They should be good in the winter,” he said.
Unsurprisingly, riding a new bike takes adjustment. He now has nine gears at his fingertips – and once, he admits, he confused a gear with his brake.
“I have to get used to it,” he smiled.
With that he set off down 1st Avenue, homeward bound, his freedom and independence restored.