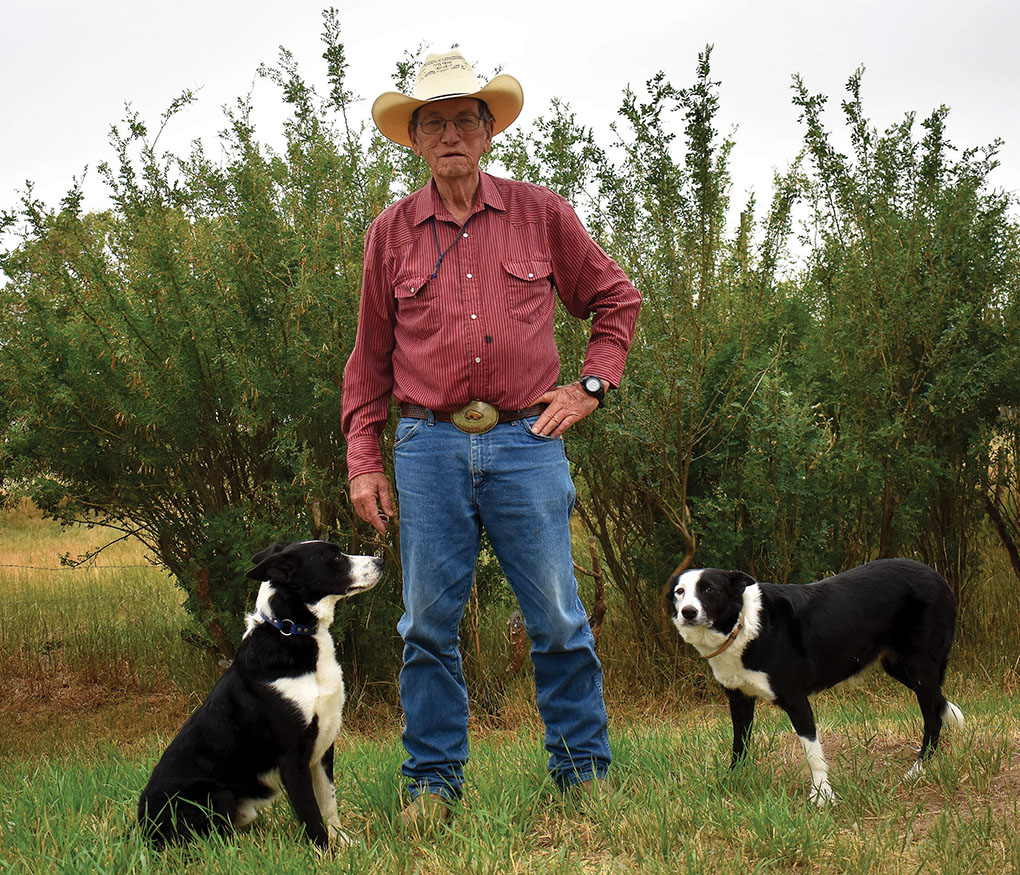 One man and his dogs: Dale Montgomery flanked by Sid, left, and Peg. He and Dawn have brought them up since they were puppies.

Giant cheques adorn a wall at Dale Montgomery’s farmhouse four kilometres west of Maple Creek.
They are visual testimony to his success as a trainer of border collies, which includes seven championship titles at the Calgary Stampede and many others at Edmonton, Regina and Winnipeg. Combined, those cheques total about $80,000.
Dale and his wife, Dawn, refer to them as “$80,000 worth of wallpaper”.
After this year’s Stampede, the wallpaper didn’t increase in value, although there was reason to believe another payday may be not far away.
Dale came 14th in the World Stock Dog Championship, which requires dogs to move three sheep through a course and into a pen in under four minutes.
It was a remarkable performance considering Dale was in a field of more than 50 entries – and his dog, Sid, was inexperienced for such a prestige event.
Nevertheless, it meant that Dale did not advance with the top 12 to the championship final round on Wednesday, July 13, in the Nutrien Western Events Centre.
“Sid was pretty good, but he needs more training,” said Dale, now back in his farm, which is set well back from the Trans-Canada Highway.
“He showed great potential,” agreed Dawn.
Sid, who will be five in September, hadn’t been the couple’s first choice for the Stampede.
That honour went to Peg.
Unfortunately, Peg tore a cruciate ligament in a back leg, an injury that will require surgery and a period of recuperation. Depending on the success of the operation, Peg should be able to compete at next year’s Stampede.
Dale and Dawn have been breeding, raising and training stock dogs on their farm since the mid-1980s.
Raised on a cattle operation near Golden Prairie, Dale has always had a connection with dogs and can still recall with affection the first one that “adopted” him, following him everywhere.
His love of animals led naturally to life on the rodeo circuit.
Once his days as a team roper wound down, however, he turned his focus to stock dog training after a friend gave him an untrained border collie, Huck.
It opened up a new highly successful career, which has contributed to the understanding and adoption of stress-free stock handling practices.
Recognized as one of the most acclaimed dog trainers in Western Canada, Dale, who wrote a multi-part series, Training Stock Dogs, in the 2015 issue of Canadian Cowboy Country magazine, was inducted into the Saskatchewan Agricultural Hall of Fame in 2014.
These days, he said, he is slowing down.
There are now 10 border collies on his farm, whereas once there were 20.
Although their primary role is to herd cattle and sheep, Dale and Dawn’s border collies provide a lot of love and affection.
“They are our pets as well,” said Dawn.