We are cash strapped, says mayor 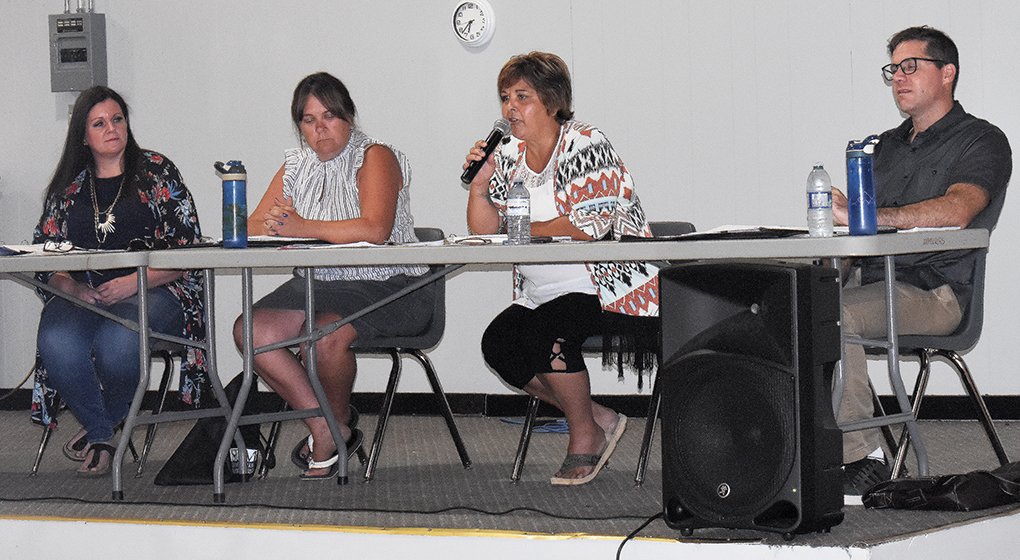 Maple Creek mayor Michelle McKenzie responds to a question from a ratepayer.

The increase in the commercial mill rate factor has caused widespread discontent in the business community, leading to Wednesday’s meeting in the Armoury for commercial ratepayers. It was attended by Michelle McKenzie, the Mayor, Councillors Cara Teichroeb, Jill Roy, Al Fournier, Betty Abbott, and Len Barkman, and Gary Schlageter, the Town CAO. Organizers were the Chamber of Commerce. At the outset, Duane Migowsky, the moderator, said that in 2016 the commercial mill rate factor was 1.1. In 2017, it rose to 2.13, and it now sits at 3.0. On top of this, there has been an increase in provincial school taxes, he said. Migowsky went on to read 10 questions submitted by commercial ratepayers. Owing to space constraints, we are printing condensed versions of responses.

QUESTION #1: What is the Town’s current financial position?
Michelle McKenzie, the Mayor, outlined long-term financial pressures on the Town, including payment of the new lagoon upgrade, the fire hall, and the landfill.
She said the Town also had to pay for daily operations, such as gas, power, telephone, facilities, and street lights.
In addition, policing had to be funded. A new RCMP agreement meant a 25-30 per cent increase in costs, from $166,000 to $210,000, the Mayor said.
“When you ask where we are at, yes, we are cash-strapped because of long-term payment with what we are doing and how the services we have we need to maintain.”
Councillor Cara Teichroeb, who pointed out that talk on taxes had to be done in the context of the budget, said the Town was “cash-strapped”, waiting for funds to come in from grant applications.
‘When we finished our budget this year, we had $220 left in bank of the budget. On paper. What’s that going to do? That’s going to buy you a tire. So, in the budget process, what happens is the next day you start your budget process for the next year. No different than running a business.”

QUESTION #2: Why has the base tax not been touched in seven years?
When she joined Council seven years ago, Michelle McKenzie was informed that base tax was added on for brownfields and derelict properties that don’t have assessed values.
“I’m elected to make sure that I’m looking at all demographics and all demographics need to be able to afford to live in Maple Creek,” she said. “When you are upping the base tax to $1,500, $2,000, that then takes the fixed income, the people that live in a 920 square foot home higher than the person that lives in a 3,000 square foot home. I feel personally that if you can afford to live with your means in a 3,000 square foot home, pay for it …”
Councillor Cara Teichroeb did not believe raising the base tax makes a big difference to the bottom line.
“When it comes to taxation it’s making the best financial decision for your community that you can at the time.”
Councillor Betty Abbott said she had been troubled for the last month about the taxation issue.
“I had a bit of an idea what a budget was, but I had no idea what a municipal budget would be. It was very overwhelming. We spent a lot of time when we were going through the budget process going line by line through the budget, questioning cuts … I relied on past Council and administration for guidance.”
Councillor Abbott said she regrettably realized that she had voted on something she didn’t fully understand.
“I didn’t understand the mill rate factor, and that it had actually changed (from 2.13 to 3), nor what it would do to the commercial businesses,” she said, adding that she had not asked enough questions.
Councillor Al Fournier, describing himself as a lifelong learner, said he too had found the budget process overwhelming.
Pointing out that the community had experienced an unprecedented year, Councillor Len Barkman said: “I know that many of you as businesses had to make cuts and pretty hard decisions. The learning curve is very steep. When it comes to the budget time, it has been steep.”
Councillor Barkman said he had not asked enough questions.
“I probably didn’t understand the way it would impact businesses. I am sorry about the way it has affected some of you.”
Councillor Jill Roy said she had only experienced two budget processes, and more research should have been done.
“The gravity of it did not register with us.”

QUESTION #4: How does the Town propose supporting local businesses as they plan for future growth, when the businesses cannot depend on fiscal stability, responsible tax action and full financial disclosure from the Town to create the confidence businesses needed before planning future investment? Does the Council understand that future initiatives may be cancelled because of these tax increases?
“If any one of our major businesses leave town, forget about a five-year plan,” said Councillor Betty Abbott. “We don’t have one any more. We have got to nurture our existing businesses.
“We have to look at serious cuts to spending, and I know that means services and that may have to be the case. That is a hard decision that we will have to make. We will have to be prioritizing what those are. But I am very aware of what losing just one business will do to this town.”
Al Fournier said Councillors needed to have one-on-one meetings with businesses and listen to their ideas.
Councillor Cara Teichroeb said there was a section on economic development in the Town’s strategic plan.

QUESTION #5: Does the Council understand that they were elected to represent their constituents and act in their best interest?
Councillor Jill Roy said: “The reason I ran for Council is that I love my town.”
Migowsky said this question had been addressed in answers to previous questions.

QUESTION #6: Who at the Town calculated the change in the mill rate factor? How were these numbers supported to Council so they could make a decision in the best interests of their constituents?
The Mayor said Council had been presented with five options by Administration and asked “if there were any calculations that we would do different”.
Michelle McKenzie said Council held numerous meetings, going through the budget lines.
She said she chose option 5 because there was only one increase in the taxation tools.
Councillor Cara Teichroeb said it was the Town administrator’s job to come up with options, to do mathematical formulas and bring them to Council.
“We go through the formulas yet again and meet continuously until we come up with a decision.”
Councillor Len Barkman said Council received “different scenarios”, which were narrowed down to two, and then one, which was voted on. He recalled a part of the discussion.
“I said: ‘With this scenario, are the taxes going to be going up in regards to what we have here?’ As far as us being new, we have to rely on certain things. I’ve been doing that. The answer I was given was that ‘the taxes will not be going up much at all, with regards to that’ That was the response that was given.
“I didn’t ask further questions with regards to that, not realizing there was going to be a bigger impact that was going to be happening. We were given those scenarios, and there were not enough questions that I personally asked. Again. I take responsibility. I made that decision.”

QUESTION #7: Does the Town have a plan if businesses decide to leave Maple Creek?
The Mayor pointed out again that the Town has an economic development officer (Gillian Moch).
“We hear your concerns. If you are sitting there thinking that we don’t, we do,” Michelle McKenzie said.
She added that she wanted Council to discuss what incentives could be provided for businesses.
McKenzie also believed 2022 taxation system discussions should look at ways of changing commercial taxes.

QUESTION #8: 2018 and 2019 audited revenues were both under 5.8 million. 2020 has not yet been published, when can we expect to see this?
Gary Schlageter, the Chief Administrative Officer, responded: “The 2020 financial statement will be published when it is in the Town’s hands. The auditor has not finished the financial statement. So, when we get it, the public will get it.”

QUESTION #9: Our businesses have had to cut many expenses, taking personal equity hits etc in 2020 as a result of the pandemic. What has the Town done to cut expenses?

The Town has made significant cuts in several areas, Michelle McKenzie, the Mayor said.
She said cuts included, among other things, four blocks of sidewalks, four blocks of sewer relining, and at the Parks & Recreation department, such as ball diamond improvements.

QUESTION #10: Would the town be open to a forensic audit of their financials, or would it be something that we would need to have the provincial government step in and mandate?
Michelle McKenzie, the Mayor, said any decision would have to come through the Council.
“We can’t have the discussion here,” she said.