‘Beautiful’ building seen as a symbol of partnerships 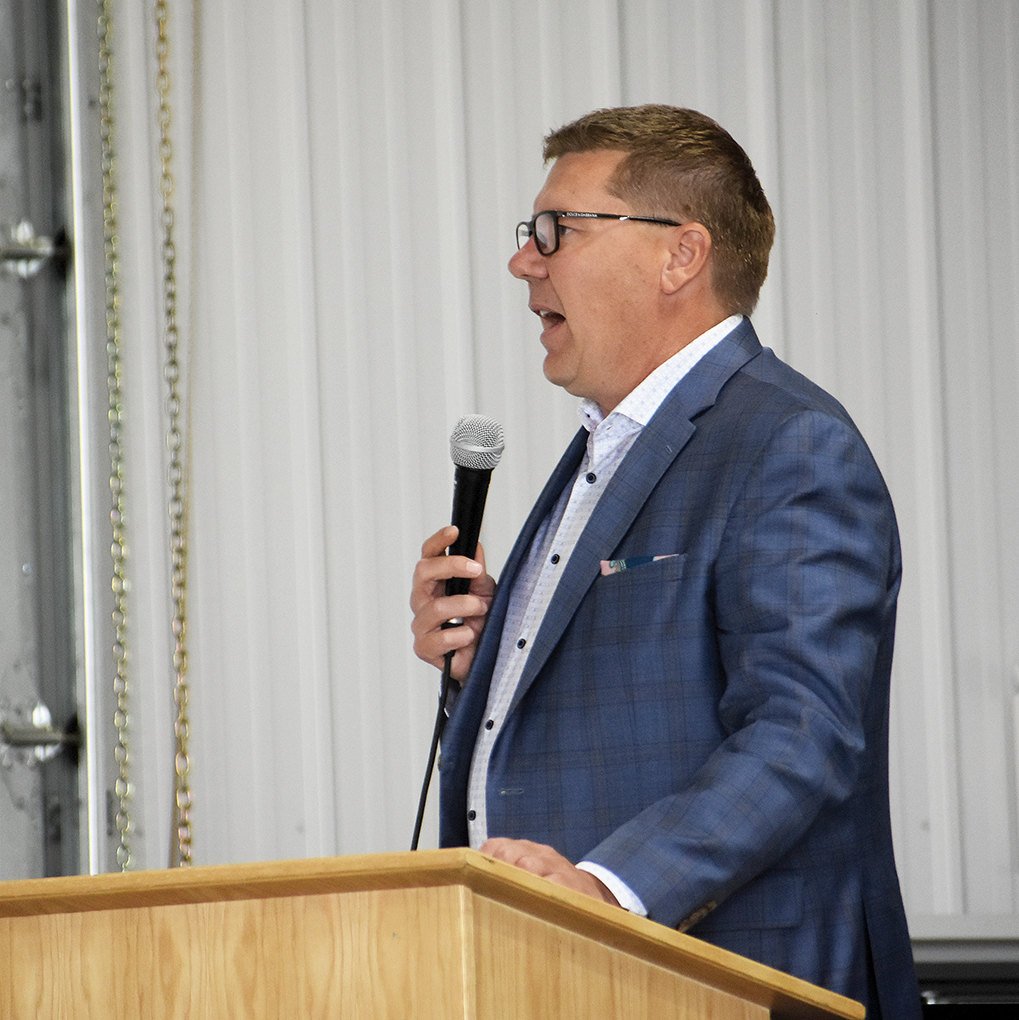 Maple Creek’s new fire hall has been held up as an example of the benefits of collaboration between communities, municipalities and provincial government. Money raised for the $1.2 million hall came from government Municipal Economic Enhancement Program funding, donations and fundraisers. In their speeches at Thursday’s grand opening of the fire hall, dignitaries touched on the theme of partnership. Here are edited versions of the speeches.
Don McMorris, Minister of Government Relations, said it was an “absolute privilege” to be back in Maple Creek.
From his vantage point on the podium, he said, he could see the hospital, a sight that revived memories.
It was in February, 2009, that plans for a new hospital were announced.
“That was just a grass field when we made that announcement,” he said. “In October, 2015, of course, they had the grand opening of that facility.”
McMorris thanked the Premier for recognizing him over the delivery of Municipal Economic Enhancement Program (MEEP) funding for the fire hall, but pointed out the credit should go to Lori Carr, MLA for Estevan and a former Minister of Government Relations.
Under MEEP, $150 million was distributed to municipalities across the province to spend as they saw fit.
Minister Carr worked hard on MEEP, said McMorris.
In Maple Creek, money went to a new fire hall project which saw a collaborative effort between municipalities.
“It took all those to work together to get a facility like this,” he said.
McMorris said his government’s job was to put infrastructure in place.
“Since we’ve had the privilege of forming a government in this province in 2007, we have had a lot of ribbon cuttings and a lot of grand openings because the infrastructure wasn’t in that great shape.”
McMorris said there was still more work to do in almost every community across Saskatchewan.
“Bit by bit, grand opening by grand opening, we are getting to where our province is in a very good position. We think there is more work to do. So congratulations to all the communities who came together as one community to make this a reality.”

Doug Steele, MLA for Cypress Hills, said the fire hall was “pretty amazing” and required a lot of hard work, planning, collaboration among volunteers, transparency, and a can-do attitude.
“We are there as government to work with our communities, and the door is always open, the phone is always on,” he said.
From his experience, he added, common ground can be found, even when there is disagreement.
Steele said his party had just concluded its working caucus, looking at ways to move forward to make Saskatchewan strong on a national scale, and an attractive place to live where governance is not complicated.
“If there is a government out there that doesn’t want to work with leadership at a local level, then it’s not for me. I am very confident this government is the one that will.”
Steele said Maple Creek can be very proud of the new fire hall.
“It’s an honour to represent you as your MLA and be part of something like this today.”
Jeremy Patzer, MP for Cypress Hills-Grasslands, said the fire hall opening was an occasion to honour people “who truly know what it means to serve and sacrifice” and are dedicated to their jobs.
Patzer said “economic development” was a fashionable, often-heard phrase. The fire hall project was evidence of economic development being more than words.
“Here in Maple Creek you are an embodiment of what that means. Whether talking to Mayor McKenzie or Chief Francis, everyone in this area is very pro-development, and actually accomplishes what they set out to do.”
Patzer said the fire hall was definitely an extension of that approach.
He added that it was great to be in Maple Creek to “congratulate each and everyone of you for the hard work you put in and service you continue to provide to this community”.
Marlo Pritchard, president and fire commissioner, Saskatchewan Public Safety Agency (SPSA), congratulated everyone involved in the building of the fire hall.
“I commend you all for this wonderful building and the decisions of RM and Town. It is a prime example of cooperation in meeting public safety and needs of citizens.”
Pritchard understood that the old fire hall was in the Town Hall, with apparatus stored in multiple locations.
“This new building and location will allow your emergency to create time efficiencies and ensure its ability to meet the changing needs of this region,” he said, adding: “This facility is an investment in the lives of the residents … it will reduce property loss, and no doubt help to prevent critical injury.”
Pritchard went on to present a plaque on behalf of the SPSA to Blaine Becker, Maple Creek’s Fire Chief, recognizing the completion of the fire hall project.
Chief Alvin Francis, Nekaneet First Nation, said the Grand Opening had fallen on a gloriously sunny day – a beautiful day to match a beautiful facility.
Having such a fire hall is a source of pride for the community, he said.
“I always consider myself a citizen of Maple Creek.”
Chief Francis commended the firefighters and essential workers who put their lives on the line.
Provoking an outburst of laughter, he said he knew something about the feeling of being in

harm’s way.
“Me as a politician, on a daily basis every time I get up I feel like someone is trying to put something in my back,” he said.
Calling for the fire hall to be put to maximum use, he spoke of the importance of training young people, and showing them the right way. 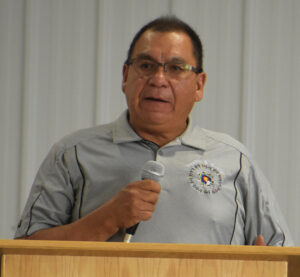 “Once you show them the right way, they are going to want to have your job,” he said amid more laughter.
Chief Francis underlined the benefits of partnerships, something exemplified by the fire hall.
He drew parallels with a team of horses in a wagon. When horses pulled in unison, much could be achieved.
“That is a beautiful thing,” he said, adding: “Let’s make our community stronger and better.”
Michelle McKenzie, the Mayor of Maple Creek, gave a brief history of the fire hall.
It started in about 2017 with talks involving the then-Mayor Barry Rudd and Council about the need to provide a safe environment for firefighters and house their equipment in one area.
A fire hall committee was formed, she said. It was made up of three councillors from the RM of Maple Creek, and three councillors from the Town. There were also the fire chief and two of his deputies, and representation from each municipality’s administration.
“This was a project that had many turns, and leaps and bounds, and all of a sudden it took a couple of steps back,” she said.
The committee went back to the drawing board many times, said McKenzie, before deciding on a course to follow.
“I would like to thank the fire committee a 100 per cent,” she said. “Well done.”
McKenzie said a great working relationship between the Town of Maple Creek and RM had developed thanks to the project.
“This project has made our community stronger,” she said.
McKenzie paid tribute to emergency workers who show their dedication, not only during COVID-19, but through every year, 24/7.
“You are the ultimate heroes.”
Elden Jamieson, the reeve of the RM of Maple Creek, began by acknowledging the work of his administrator Christine Hoffman.
He said the fire hall was an excellent example of what collaboration can achieve.
“The RM has worked with the Town, Government has worked with us,” he said.
Jamieson said the fire hall committee still met every month.
“I take great pride in our community,” he said, adding that there was still lots of work to do at the RM, with new projects coming on line. .
“If we work together, we will accomplish our goals,” he said.