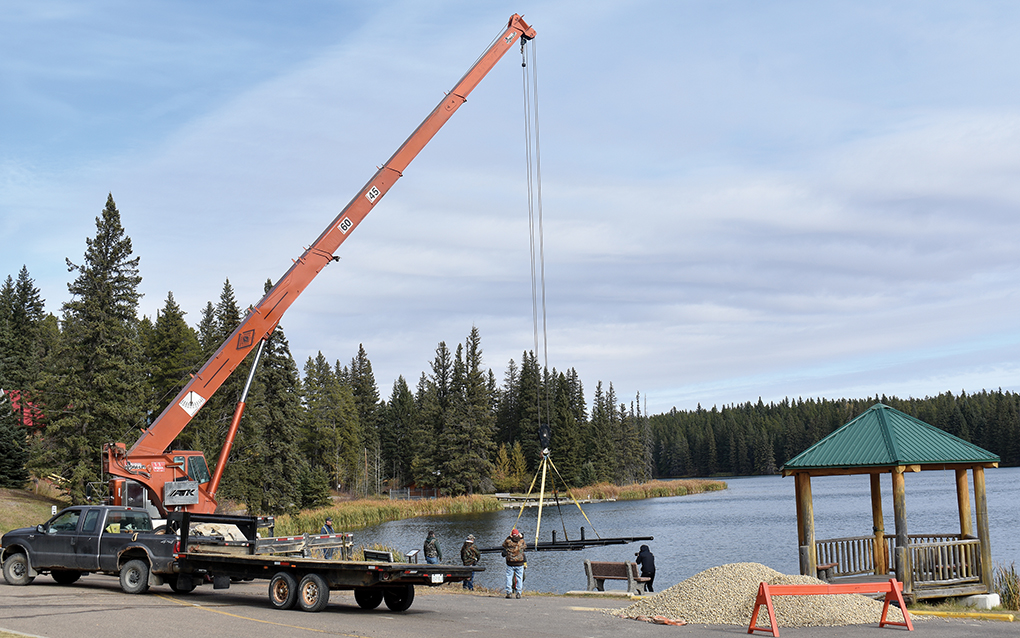 Bed time: A crane lowers a frame built from ABS tubing during a mission to install a replacement brook trout spawning bed at Loch Leven.

Sometimes nature needs a little help.
In 1998, a spawning bed for brook trout was installed near the gazebo at Loch Leven in Cypress Hills Interprovincial Park. It was the only one of its kind in the province.
Its success, however, was ultimately undone by a build-up of algae, which disrupted water flow and discouraged spawning.
No longer could brook trout be seen on the bed in their autumn colours – an eye-catching spectacle for park visitors, including fly-fishing enthusiasts.
Last week, a group of wildlife conservationists sought to put this right by replacing the bed. They hope the new one, measuring roughly 25ft by 15ft, will be more resistant to algae.
It was a lengthy operation requiring about 120 feet of ABS (acrylonitrile butadiene styrene) construction tubing, a pile of clean stone, a bobcat, a crane, and a paddle boat.
Four Maple Creek volunteers from the Saskatchewan Wildlife Fishing Federation took part: Ron Schaal, Trent Empey, Murray Bartole, and Howard Harder.
Also involved were James Villeneuve, Moose Jaw-based director of fisheries with Saskatchewan Wildlife Federation, and Nick Elmslie and Roy Daul, from Swift Current’s Bacoda Crane & Oilfield Ltd; these two were the only non-volunteers.
The first part of the operation took place over two nights in Empey’s garage, where black ABS tubing was welded onto a frame.
On Thursday morning, under sunny skies, but chilly temperatures, the frame was taken to Cypress Hills park.
The initial challenge was to remove the old bed, built from weeping tile. At one stage, Villeneuve had to wade out to help with the removal.
Once this was done, more sawing and tweaking occurred to get the new ABS frame into shape.
Shortly after the News-Times arrived at 11.30am, it was slowly lowered into the water by the crane, operated by Daul. The depth of water at the site – a few metres from the edge – varies greatly, from 2-3 feet to 6-8 feet.
Empey and Villeneuve then went out in a paddle boat to place markers at the site of the bed. These were used as a guide for depositing bucketfuls of gravel, again with the use of the crane.
It will be among these clean rocks that brook trout create spawning areas.
By about 3pm, the new bed had been installed; the operation had lasted more than five hours, excluding time spent in Empey’s garage.
Villeneuve said the project came under a Fisheries Enhancement Agreement, featuring a partnership between the Ministry of Environment and the Saskatchewan Wildlife Federation.
“It is one of 150 projects across the province,” he said.
Villeneuve said the wildlife federation and Maple Creek Fish and Game League had installed the first bed 23 years ago with the Ministry of Environment.
The idea was for water from a natural spring to come through tubing, keeping the area clear and creating a current among rocks.

The bed worked very well until about three years ago, when fish stopped using it so much.
“Over the years, algae grew on the old weeping tile that was in there and prevented the flow, so the water was not clear like it used to be and fish were no longer able to use the spawning bed to reproduce,” said Villeneuve.
“Essentially, we had a choice of either taking the old one up, cleaning it off and putting it back in, or doing what we ended up doing – building a new one out of ABS instead of weeping tile. The ABS will be smooth and won’t allow algae to build up in quite the same way.”
Villeneuve said getting ABS tubing, a standard plastic-type construction material, had proved challenging because of a shortage. Finally, it was acquired from Manitoba.
The clean stone was acquired locally.
“There has to be very little dirt on it, so we are not adding turbidity to the system,” said Villeneuve. “The stone goes on top of the bed. Fish move around the rocks with their tails to create spawning areas.”
Villeneuve underlined the importance of a spawning bed.
Brook trout are not a native species, he said, and in most circumstances do not have the right habitat to reproduce. That is why they are stocked.
“This is the only spawning bed of its kind in the province,” he said, adding: “If you have fish that are visible on the bed, it encouraged people to get out and try fly fishing. It can also give people a connection with nature.”
Villeneuve said the project had been in the works for a while.
“We’ve been trying to do it for a couple of years and COVID-19 stopped us. We were supposed to do it last spring, then last fall, and then this spring – but COVID was still a problem.”
Villeneuve said the effectiveness of the new bed would be monitored.
“We have to add more rock every five to 10 years,” he said. “We’ll see and check on progress. The next step would be later this fall or the spring, when we will use a flow meter to check the flow of the water through the tubes.”
Schaal was one of those who installed the original bed in 1998.
This time, he wished to thank Maple Creek’s Koncrete Construction Group for paying for the haulage of gravel, and providing the bucket for dumping it. He also thanked Cypress Park for loaning the bobcat, used for scooping the rock and putting in the bucket.
“It will be interesting to go to the bed in the spring, or next September, to see the brook trout,” he said.