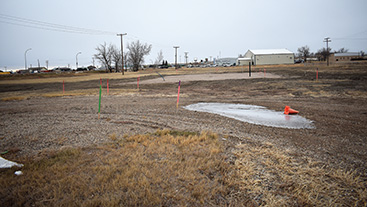 Construction work on a Tim Hortons restaurant in Maple Creek is expected to start in the second half of January.
The Drumheller-based Canalta Group will be project general contractor and restaurant landlord.
It is hoped that the new drive-through restaurant will be open in July, 2022, in time for the tourism season.
Several jobs will be created, although the exact number has not been announced.
News about the proposed development was disclosed to the News-Times by Robert Visser, from Canalta.
“We are looking forward to starting,” he said. “We are very excited.”
Visser’s announcement confirms rumours that have been circulating in the area for months.
Michelle McKenzie, the Mayor, said she was thrilled about the prospect of another business coming to town.
She said it would increase diversity, offering something different in a community already boasting a coffee shop and bakery.
“I think it is awesome news,” she said. “I am really excited.”
McKenzie speculated that as many as 10 to 15 jobs could be created through the season, with two different shifts.
Norm Fiss, president of the Maple Creek Chamber of Commerce, said it was always exciting when a new business comes to town.
Based in Toronto, Tim Hortons is a Canadian multinational fast-food restaurant chain that specializes in serving coffee, doughnuts, and other fast-food items. As of December 31, 2018, it has 4,846 restaurants in 14 countries.
The planned Tim Hortons in Maple Creek will be built on 0.6 acres of land across the railway tracks from the Co-op, near a lift station and the baseball diamonds.
The 2,200 square foot building will be a typical drive-through restaurant, said Visser.
He said the site had been on Tim Hortons radar for a while.
This year, Canalta purchased the land. Since then, the company has been getting regulatory approvals, including a development permit.
At the September 14 meeting, Town Council considered three matters relating to Canalta Real Estate Services Ltd.
Firstly, Council accepted the service agreement access, road construction, and road maintenance with the company as presented. Then it accepted the amendment of offer to purchase between Canalta Real Estate Services and the Town of Maple Creek with changes to the land description.
Thirdly, a motion that the Town accept Canalta Real Estate Service’s request for a tax incentive for a new commercial and industrial construction, as per Bylaw 2020-MC-02 Section 4 a), was defeated.
At the meeting, Councillor Betty Abbott said the Town’s responsibility was to create a fair business playing field.
She disagreed with the option of giving Canalta a five-year tax waiver.
“I know we want to encourage new businesses, but there are existing businesses struggling to get a break.”
Councillor Len Barkman agreed.
“We want a fair playing field,” he said.
Speaking last week, Visser said all the necessary regulatory approvals had now been acquired and he anticipated construction would start in the second half of January.
It is expected that Tim Hortons will issue a media release shortly before the new restaurant is scheduled to open.
Visser was unable to say how many jobs would be created.
McKenzie said she hoped more companies would see Maple Creek as an attractive place to do business.
Canalta is based in Drumheller, Alberta. It is a private, family-owned company that develops, builds, owns and manages hotels, franchised restaurants and commercial real estate throughout Canada.
In recent years, the company has invested heavily in Medicine Hat with its development in Box Springs Business Park, which includes the Hampton Inn and Suites, Boston Pizza, The Keg, and the Canalta Centre.