Helping the world come together: Q & A with Wilbur Sargunaraj 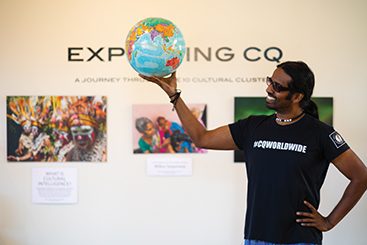 A photo exhibition by cultural intelligence facilitator Wilbur Sargunaraj has gone on show at the Jasper Cultural & Historical Centre. “Exploring CQ” is a virtual journey designed to help people increase their cultural intelligence. It features a series of photographs taken by Wilbur over the last decade as he worked and partnered with various communities and organizations. The relationships formed by these cross-cultural interactions inspired this exhibit, which will be up until the end of June. PHOTO BY ALEXIS PIMENTAL

QUESTION: What started you on this journey, and got you thinking about CQ?

ANSWER: From a young age I remember being fascinated by meeting people from different cultures. My parents moved around quite a bit so I was constantly being introduced to new food, cultures and friends. Going in and out of these settings whether it was an international school, living in rural or urban India, small town Saskatchewan or Tokyo, I was exercising CQ without knowing and understanding the concept! About 15 years ago while making creative “How To” videos from around the world, I was approached by the CQ centre in Singapore to see how I could partner with them. This is where I was able to name Cultural Intelligence and to analyze the actual strategy I was using when I was connecting with people from different cultures. Although I received my CQ certification from the Cultural Intelligence centre I believe the interactions I had growing up challenged me to delve into CQ and cross-cultural communications. All that being said don’t believe the myth that increased travel means increased CQ! In our globalized world there are many opportunities to strengthen CQ and build bridges domestically without having to step on an airplane bound to a far off country.

QUESTION: Did you learn anything about yourself though the exhibition?

ANSWER: Absolutely! The one thing that I learnt about myself is that I have a hidden bias! It’s really hard for us to admit that we have a bias and more often we fail to recognize it in ourselves! This especially became clear when I was doing research on the 10 cultural values that are showcased in the Exhibition. Despite being a Cultural Intelligence Facilitator, I had entertained many deeply ingrained unintentional stereotypes and if I was going to be an effective bridge builder across cultures, I would have to deal with this. CQ helped me with my unconscious bias by enabling me to react consciously and to be thoughtful in my actions. On a side note- I also learned that no matter how hard I try, I still find the thought of eating fried Tarantula quite revolting! Making mistakes and feeling overwhelmed are all part of the journey in developing CQ. There is nothing wrong with that!

QUESTION: What is CQ and why is it important?

ANSWER: CQ is one of the research-based forms of intelligences (like IQ and EQ) It may sound academic but it is extremely easy to grasp. CQ is your ability to effectively work with people from different cultures. You can see why exercising CQ is extremely important in a diverse country like Canada and of course in our globalized world where we are constantly encountering people from various cultures. CQ is important in building relationships across cultural differences so we can move towards each other instead of tolerating each other and staying in our own bubbles. CQ can also help us when we are faced with challenging cross cultural circumstances.

QUESTION: How do you assess your own CQ and do you see this as a lifelong learning process?

ANSWER: CQ can be measured and can be improved! To make a personal assessment one needs to have an understanding of the foundational 4 capabilities of CQ. CQ Drive, CQ Knowledge, CQ Strategy and CQ Action. These are all explained in detail in the exhibition but in a nutshell it’s developing an interest in cultures, gaining an understanding of similarities and differences, being aware and appropriately adjusting your behaviour when dealing with different cultures. CQ is for everyone and it’s something we need to work on everyday as we rub shoulders with people from around the world!

QUESTION: What is your assessment of cultural awareness in Canada?

ANSWER: Cultural awareness is practicing ‘Cultural Intelligence Knowledge’, which is having an understanding of similarities and differences between cultures but it can’t stop with just knowledge. The other 3 capabilities of Drive, Stategy and Action are needed to be effective when interacting with different cultures. I would say in Canada there is a big push for ‘Tolerance’ so we attend folk festivals, try food from different cultures and ‘put up’ with people around us. I believe that we need to move beyond tolerance and have a transformation of the heart where we engage, listen, dialogue and enter into the world of people who are different than ourselves.
While we talk about Canada and CQ we also need to talk about reconciliation, which is also at the heart of this Exhibition. How do we live together side by side with all our differences? We can talk all we want about Reconciliation but until we practice CQ Drive and take active steps to enter into the world of our perceived ‘other’ I am afraid we won’t see change. The government is not going to make reconciliation a reality! It’s up to you and me and society! ReconciliACTION is settlers and First Nations exercising CQ and taking those active steps to connect with one another while seeking to right the wrongs of the past. For some reconciliACTION is taking small steps which might mean eating bannock, attending a Powwow, or just trying to have a conversation and listen to an Indigenous person. I was extremely happy that our Saskatoon premiere was held at the Wanuskewin Gallery on Treaty 6 Territory this March where we could have meaningful and honest discussions about this topic.

QUESTION: What are some obstacles to increasing Cultural Intelligence?

ANSWER: We all struggle with some level of bias whether we are aware of it or not. Uncovering and confronting our unconscious bias is very important if we seek to increase our CQ. By being introspective, we take small steps in facing our biases and we can develop genuine relationships with those who we thought were different than us. Saying, “I am not a racist person” while staying within our own cultural bubble won’t get us far in our work of building bridges!

ANSWER: For the past two decades I have been using my cameras to partner with various organizations like NPR, IOM, Airbus, Ottawa Tourism, Steps International to create culturally intelligent marketing campaigns and music videos. I am also an aviation enthusiast who contributes for UK based Airliner World and Airports of the World magazines where I have enjoyed documenting inspiring stories within the aviation world.
While spending time capturing video I naturally gravitated towards framing shots so jumping into photography was a natural progression. I am a strong believer that one does not need the latest and greatest equipment to tell inspiring stories. My photography mentor taught me that having an “eye” is the most important thing! I am currently using my workhorse Canon 550D – DSLR that I purchased in 2009. My assortment of lenses has grown over the years and I just welcomed a 600 mm telephoto zoom lens to the family! In this exhibition the primary camera was the Canon 550D but I also used my iPhone SE and 4S and some of the photos were even taken on my old Powershot A75!

QUESTION: What do you want people to take away from this exhibition?

ANSWER: The goal of Exploring CQ is to help people gain a better understanding of Cultural Intelligence so they can be more effective in their interactions with people from different cultures. My hope is that after people go through the exhibition they will be honest with themselves and confront their unconscious bias so they can work on developing relationships with people and cultures that they find difficult to connect with. I would love for them to reflect on questions like “Who is my ‘Other’?” and “How can I use CQ to come closer together”? How can we as humanity with all our differences, come together, break bread and enter into each others’ world to listen to dialogue and to love! CQ becomes something that always pushes us towards relationship. Without relationship it’s just knowledge!

QUESTION: What are people saying about your exhibition?

ANSWER: Exploring CQ is more than just an assortment of nice pictures. The exhibition is designed to introduce people to CQ and to help them build meaningful relationships across cultures. It is the first of it’s kind, as Cultural Intelligence has not been presented in this format. We are excited to have received an invitation this fall to showcase the exhibition in London at the U.K branch of the Cultural Intelligence Centre. Since launching the exhibition at the Grand Coteau Heritage and Cultural Centre in Shaunavon last year, we have been receiving many inquiries. The response has been overwhelming that I decided to partner with an extremely knowledgeable and experienced person in this field who is from South West Saskatchewan. Wendy Thienes will be joining the Exploring CQ team to take on the role of Exhibition Tour coordinator and our Program Consultant. I am really excited to work with her and to bring the exhibition to many more spaces across the province, country and the world.