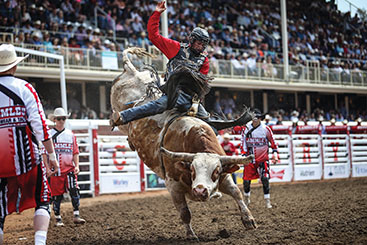 One of Jared Parsonage’s childhood dreams will shortly come true.
For ten days in December, he will compete against the best in the rodeo business – at the 2022 Wrangler National Finals Rodeo (NFR) in Las Vegas, Nevada.
His appearance will make rodeo history. Not only is he the first Maple Creek cowboy to qualify for this esteemed event, he is only the fifth one with a Saskatchewan address to do so. Unsurprisingly, the 29-year-old bull rider and rancher is pumped at the prospect of competing in the “super bowl of rodeo”.
“I’m super excited. I grew up in Maple Creek, a rodeo community, and used to dream of going to the Vegas finals.”
Jared is aware of the history of the NFR, which started in Dallas in 1959, before moving to Los Angeles (1962-64), Oklahoma City (1965-1984), and finally to Vegas, where it has been held since 1985, bringing in more than 170,000 fans.
Veteran cowboy Tom Reardon was thrilled for Jared, whose achievement has brought kudos to Maple Creek.
“I’ve been waiting since 1959 for someone from Maple Creek to make the national finals,” Reardon said.
Qualification rules for the NFR ensure an extremely high standard of entries.
Only the top 15 contestants in the standard events – bareback riding, steer wrestling, team roping (headers and heelers), saddle bronc, tie-down roping, Women’s Professional Rodeo Association barrel racing, and bull riding – qualify, based on the Professional Rodeo Cowboys Association (PRCA) World Standings. They will battle it out for a share of the purse, increased this year to $14 million, and the coveted Gold Buckle.
The NFR consists of 10 rounds – one round on each of the 10 consecutive days, with each contestant competing once a day.
Getting to the December 1-10 finals will be a crown jewel in Jared’s glittering career that keeps reaching new heights. In the PRCA world standings he is now 10th, having amassed $112,313.62.
Among his 2022 highlights are victories in the Wainwright (Alberta) Stampede; Pile ‘O Bones Rodeo, Regina, Saskatchewan; Moses Lake (Washington) Round-Up Rodeo; Okotoks (Alberta) Pro Rodeo; New Mexico (Albuquerque) State Fair & Rodeo; and Co-champion at the Missoula (Montana) Stampede Xtreme Bulls.
“Through the summer Jared has been hotter than a two-dollar pistol,” said Reardon.
Jared’s year started in Canada, where he says he enjoyed some good luck, and continued in the US.  “What you win in Canada counts in the US,” he said.
August proved exceptionally good; in the first three weeks he earned $13,287.
Although luck is important, hard work, commitment and perhaps the wisdom that comes with age are the cornerstones of success, says Jared.
As he prepares to head to the November 2-6 Canadian Finals Rodeo in Red Deer, followed by the NFR, Jared feels in peak physical and mental condition. He still loves what he does, and hopefully has a few more good years at the top.
“My body will tell me when I need to do something else,” he says.
Jared spoke to the News-Times from his ranch near Maple Creek, during a break from the rodeo circuit. In the background, his baby son, Kade, could be heard.
A future rodeo star for Maple Creek perhaps? Put to him that Kade Parsonage is a good cowboy name, Jared laughs.
“It’s short, that’s for sure. Easy to say.”
In just over a month, Jared’s family will be in the Thomas & Mack Center giving him as much hometown support as possible.
He will be among 120 professional bull riders and cowboys vying for the prized title of National Rodeo Champion in a festival drawing the biggest names in the rodeo world.
At the end of the competition, there are two champions in each event (four for team roping). The first champion is the average winner with the best cumulative time or score over 10 rounds. The second champion is the world champion who finishes the year with the most money, including what is earned at the NFR.
The sporting schedule starts on Thursday, December 1 with an All In Barrel Race.
Other days will feature YETI Junior World Finals; bull riding, bareback and saddle bronc; Ariat World Series of Team Roping; and pole bending, barrel racing, steer wrestling, team roping, tie-down and breakaway. There will also be a Bullfighters Only Las Vegas Championships.
Naturally, the occasion will have all the razzmatazz associated with a Vegas extravaganza.
Opening acts will feature: Vegas Night (December 1); Luke Bryan (Dec. 2); Lainey Wilson (Dec. 3); Adrian Brennan (Dec. 4); Chancey Williams (Dec. 5); Ben Gallaher (Dec. 6); Steve Amerson (Dec. 7); Joe Nichols (Dec. 8); Heath Sanders (Dec. 9); and Gold Night (Dec. 10).
Other activities include trade shows, Cowboy Channel Cowboy Christmas, gift shows, a bucking horse and bull sale, tailgate parties, Miss Rodeo America Pageant shows, cowboy revivals, bowling tournament, the 35th Annual ProRodeo Hall of Fame Golf Tournament, and autograph sessions. And that is just a fraction of what will be going on.
After the hard graft of 10 days of competition are over, Jared hopes to have a little free time.
Whatever happens in the arena, just being in Vegas represents a huge achievement … and, as an added bonus, temperatures should feel like a Maple Creek summer.