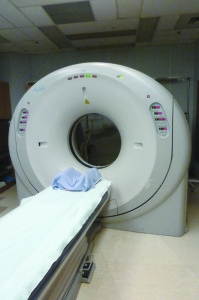 This is what fighting in sports can lead to – a trip to the hospital. One way to detect brain injuries is with a CT scan, which stands for computed tomography. The images allow doctors to check for skull fractures, brain bleeds, bruises, cranial swelling and more. That being said, it’s not possible to see a concussion with a CT scan. That requires a much more sophisticated and expensive machine known as a Diffusion Tensor Imager (DTI) that can show signals not travelling properly within the brain. The brain’s difficulty to transmit messages is what confirms a person is concussed. A CT scan will show head injuries that could suggest a concussion, but not the concussion itself.      Photo by Dominique Liboiron