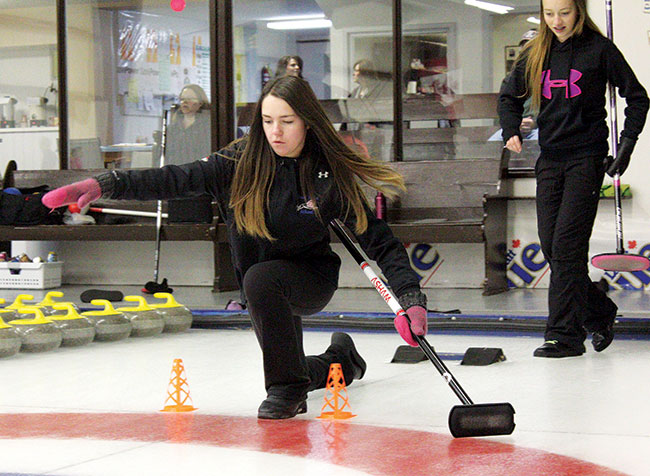 Along with members of the Maple Creek club, curlers from Gull Lake, Tompkins, Irvine, Fox Valley and Leader made the trip.

Also coming to the curling event was Brian Champion, who coaches on the provincial circuit and World Curling Tour, and is a high performance consultant with CurlSask. Champion came to last year’s skills camp in Maple Creek as well, he said.

“I do clinics around the province for any age,” Champion said. “Last year it was a fun group and a great rink to be in so they asked me to come back.”

Champion gave the curlers, who ranged from early elementary to high school, a chance to work on balance, getting in and out of the hack, brushing and overall skills in the sport.

“The kids are fantastic, they’re all here to learn. We had everybody from someone that’s curled for a year up to people who have curled for six or seven years,” he said.

As long as Maple Creek will have him for a skills event next year, Champion said he’d like to return.

“I love doing these things. This keeps curling alive,” he said.

One of the visiting coaches, Lana Marshall from Leader Composite School, said having her team work with Champion is great experience.

“When we found out [Champion] was going to be here and they had room I took six kids right away,” Marshall said. “We had him in Leader last year and he did a wonderful skills camp.”

Earlier this year, Leader’s curling rink was condemned, so the team has to travel to Abbey to play many of its games. As a result, the team has gone from 50 people to 14. Marshall’s hopeful the same thing won’t happen next season, she said.

“We are in the process of working with an architect so we can get a new building up next fall,” she said.

Being able to have curlers from Leader and other surrounding communities helps build the game, said Maple Creek club president Von Yarshenko.

“It’s good to get junior curlers coming up because our curling rinks are dying around the country, so we need to get young people curling,” Yarshenko said.

The organizer of the event, Nancy Frey, said events like this help to generate interest from the curlers.

“As a club, our numbers are really down this year,” said Frey. “This is how we get more curlers interested, providing camps for the young.”

Having someone like Champion come in further boosts the interest, she added.

“The kids like having someone from the outside coming in. It’s pretty exciting when someone from somewhere  else comes into their small town to do this,” she said.

Next year the Maple Creek Curling Club will look to hold its Skills Event in November, rather than December. This is being done to make sure the clubs get some practice early on in the curling season, explained Frey.