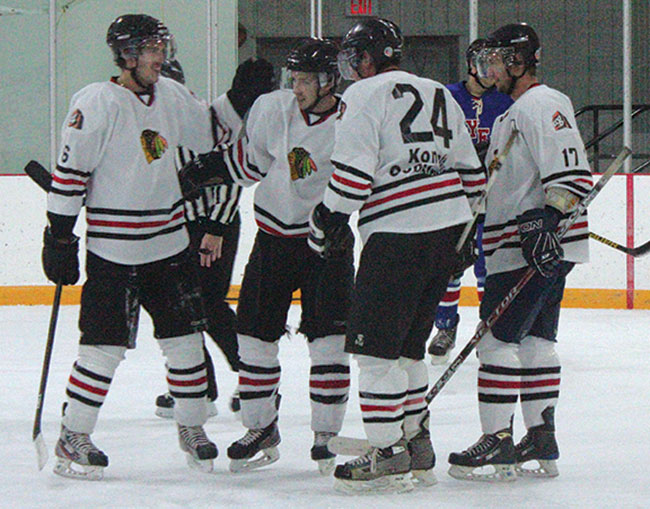 The Maple Creek Senior Hawks will be heading into Christmas with a win.

The Hawks topped the visiting Frontier Flyers 6-3 on Dec. 17 at the Maple Creek Arena.

Maple Creek got things started seven minutes in, when Jason Roberts, in his first game of the season, was able to pot a rebound off a failed Lane Sanderson wraparound.

The Flyers were able to answer back before period’s end after a Hawks’ turnover at the opposing team’s blue line.

Frontier, rushing down into the Hawks’ zone after the late-period turnover, were robbed by Maple Creek’s Mike Tadjdeh once, but beat him on the second attempt, tying the game at one with eight seconds left.

It seemed as if the tie would carry into the second, but Garrett Stokke found himself on a partial breakaway just seconds after the next faceoff. Stokke fired one low blocker side on Flyers’ goaltender Thomas Skelton, putting the Hawks up 2-1 with just one second left in the first.

The Hawks dominated possession in the second period.

Maple Creek’s Blake Sanderson was able to score six minutes into the frame, with assists from Clint Bertram and the team’s goalie Tadjdeh.

The Hawks couldn’t find a second goal in the period however, as Skelton made big save after big save, keeping it a 3-1 game.

After minutes of Hawks’ pressure, the Flyers finally got a scoring chance and made it count. Frontier captain Dayton Fossum found himself on a breakaway and fired it high glove-side with four minutes left in the period.

When the second period came to a close, the Hawks led by just one, at 3-2.

The hometown team was able to score early in the final frame as Lane Sanderson put the puck top corner, extending his team’s lead to 4-2. Roberts and Brady Bertram picked up the assists on the goal.

There was a scary moment a few minutes later as Maple Creek’s Kyle Florkowski stayed down after a hit from Frontier’s Dustyn Dickson.

Florkowki limped off the ice and did not return, but team manager Len Rodin said he will be OK. Rodin added he did not think there was anything wrong with the hit.

“It was a hard hit, [Dickson] does it all the time. It was a hockey hit,” Rodin said.

Already on a powerplay when the hit happened, the Hawks were awarded a five-on-three and they made the man-advantage count.

Stokke scored his second of the game off a bit of a scrambled play down low, with assists going to Kelly Leismeister and Lane Sanderson.

The teams each scored one more, with Dickson scoring his second for Frontier and Roberts picking up another for Maple Creek before the final buzzer. Roberts finished with three points in his first game this season.

The final score saw a 6-3 victory for the Senior Hawks over the Flyers.

The goaltending from both Tadjdeh and Skelton was spectacular, Rodin said.

“Our goaltender played well. He always does,” he said. “Their goalie played really good tonight.”

Both teams were missing some players, Rodin said, which affected the game.

“Both teams were shorthanded so it got slow at times,” he said. “We were a little better to start the third.”

Frontier head coach Kent Webb agreed with Rodin. Fatigue was a big factor in the game, he said.

“We missed a couple players with everyone gone for the holidays and some players having to work,” Webb said.

The Flyers will have to bring it against Maple Creek in their next match-up, he added.

“They’re a pretty good team and I hope to play them again better,” he said.

The Senior Hawks next play Jan. 8 in Gull Lake.

After only playing two games in December, Maple Creek is expecting to have a full schedule in January. They are currently scheduled to play eight games in the first month of 2017.