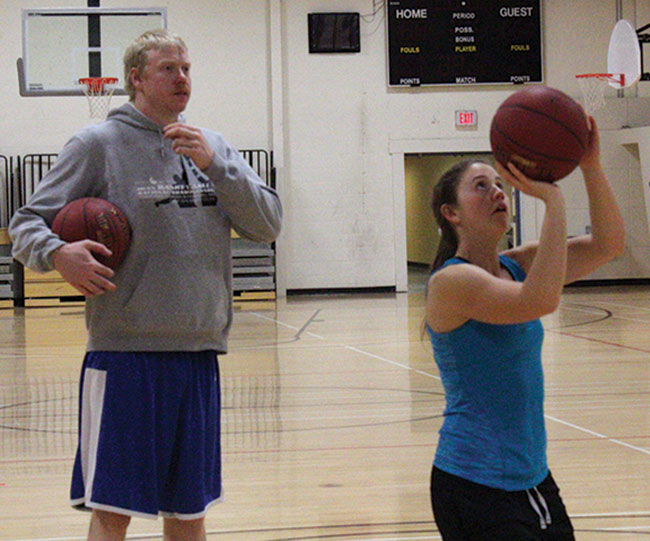 The Rebelles got some help from a national champion during practice recently.

“I’ve had a lot of experience with different coaches, playing for and helping to coach with. I’ve picked up some knowledge that I can help pass back,” said Unsworth.

The big thing Unsworth wanted to focus on at the Rebelles’ practice was shooting, he said.

“They were struggling with their shooting percentage during the game [Dec. 13], so we’re working on decision-making and some shooting skills for the girls to practice going forward,” Unsworth said.

Helping the current players is something he wanted to do as a former Maple Creek Composite School student, he said.

“It’s a good chance to come and help give back and help them out with their program,” said Unsworth.

Due to other commitments, Unsworth said he will not be coaching Red Deer this year. Even though coaching is a very busy endeavor, he enjoys the teaching aspect of it.

“Watching players and teams grow and the success they have is always an exciting part of it,” he said.

Unsworth has helped run a practice every year since coaches Joann Haughian and Christa Lawrence took over the team.

“Having him come in here and help us once or twice a year is a huge asset, especially on the shooting end,” said Haughian.

When Haughian and Lawrence played they were in guard positions, so being able to have someone who has played in the post come teach the players is very helpful, she said.

“He’s really brought a whole new element to post-play,” she said. Unsworth has also helped “with footwork, which is huge.”

Usually Unsworth comes around Christmas, Haughian said. The sooner he comes in the better, she said.

“We haven’t started any bad habits,” said Haughian. “It’s not like it’s February and we’ve been doing things wrong the whole time where he’d have to try to correct everything.”

Haughian added that she’s hopeful Unsworth will be back by the end of the season for another practice.

“Maybe we’ll convince him to come back one more time.”