Wickenheiser calls it a career 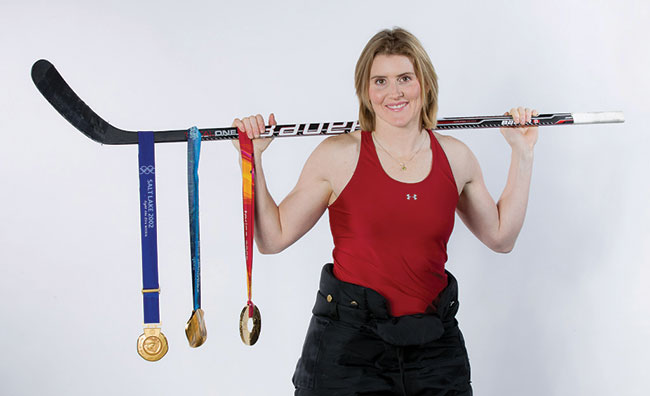 The pride of Shaunavan, Hayley Wickenheiser announced her official retirement on Jan. 13. She retires as the highest scoring woman in Canadian womens' national hockey team history with 168 goals and 211 assists in 276 games. PHOTO COURTESY WWW.HAYLEYWICKENHEISER.COM

Arguably the greatest womens’ hockey player of all time has hung up her skates for good.

Shaunavon’s Hayley Wickenheiser officially announced her retirement Jan. 13 after winning four Olympic gold medals in 2002, 2006, 2010 and 2014, as well as seven World Championship gold medals between 1994 and 2012 over the course of her career.

“I’m going to miss the grind of getting up every day and being a hockey player,” Wickenheiser told the Maple Creek Advance Times.

A day after her retirement, she was honoured at an NHL game in Edmonton on CBC’s Hockey Night in Canada.

“It was one of the greatest moments of my career,” she said. “It was a great way to spend my last day on the ice and I’ll never forget that night.”

She also cited the 2002, 2010 and 2014 Olympics, scoring the gold medal winning goal for Alberta’s 18-and-under team in the 1991 Canada Winter Games and playing professional mens’ hockey in Europe as a few other career highlights.

Wickenheiser, who has the most points of any player in the history of Canadian womens’ hockey, is retiring in order to enroll herself in school for medicine.

The medical world seems like a perfect fit for a hockey player, she said.

“I like the idea of being in the ER where it’s fast-paced, you’re in a team, you have to make quick decisions, you have to manage egos. There’s all sorts of things that go on there that appeal to me.”

It’s also possible that Wickenheiser will return to the game in an off-ice role down the line, such as coaching or management, she added.

“If the right opportunity came along and I could get involved that’d be pretty cool, but I’ve got to go after this medicine thing first and see where it leads me.”

She had been contemplating going to school for a year or so before making the decision.

Growing up in Shaunavon, medicine and hockey were the only career paths Wickenheiser saw herself taking.

Recently, she sent a letter to the town of Shaunavon thanking them for helping her become the person and player she is today.

“I can’t think of a more perfect place to have played hockey. The people I was surrounded with believed in me and gave me a chance to play the game.”

This past year Wickenheiser trained with NHL player Braden Coburn, who is also from Shaunavon. The two of them are proud to represent the town, she said.

“It kind of makes you tough growing up in the prairies,” she said. “My heart and my hockey soul is always going to be in Shaunavon.”

Since first playing international hockey in 1994 at the age of 15, the growth of womens’ hockey and the respect it has gained has been “huge.”

“There’s more girls in the game and more interest in it.”

Internationally the womens’ game has grown, but there’s still more that can be done.

“Most people don’t watch womens’ hockey except for two weeks every four years and that’s what we’d have to change.”