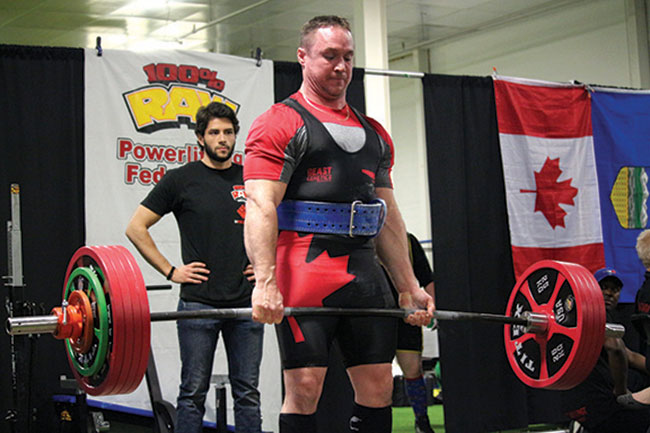 Mike Moorhead completes a deadlift as the bar he’s lifting flexes under its load of 507 pounds or 230 kilograms. Moorhead was a competitor at The Iron Challenge in Medicine Hat, Feb. 18 and set a number of national and world records. PHOTO DOMINIQUE LIBOIRON

For Frey and Moorhead, the meet gave them a chance to show they’re improving within their sport.

Frey went into the competition holding national records in the squat, deadlift and in full power. He retained and improved all of them at The Iron Challenge.

At The Iron Challenge, Frey competed for his first time in strict curl. This involves standing with the weight at hip level and curling his arms up towards his shoulders. Frey’s target was 130 lb. or 59 kg. He lifted 138 lb. or 62.5 kg, setting a new Canadian record.

Despite the success, Frey had some difficulties in the bench press, an event he admits is his weakest. Nevertheless, the personal trainer is determined to set a new Canadian bench press record. His goal is 238.5 lb. or 108 kg.  With improved technique, Frey is convinced he’ll achieve that mark and he’s not far off, only seven pounds or three kilograms.

Frey’s ultimate goal is to earn a spot on Team Canada in order to attend worlds. To apply for a spot with the national squad, he needs to up his total in full power by 46 pounds or 21 kilograms.

Frey excelled at The Iron Challenge and built on the success he achieved at his last competition held Nov. 12 in Calgary.

Moorhead had an equally-dominant performance at his last competition. He attended worlds in Erie, Penn., from Oct. 7-9 and established two world records, one for the bench press and the other for strict curl.

Despite his performance, the powerlifter felt disappointed because he thought he could do better. To prepare for The Iron Challenge, Moorhead trained differently compared to worlds. Instead, he timed the peak of his training to coincide with the event rather than two weeks before, as was the case in Erie.

With better training and less travel to attend the competition, Moorhead was confident he would be more competitive.

Moorhead was right. For his age and weight class, he set world records in the strict curl and the bench press with totals of 163 lb. or 74 kg and 394 lb. or 178.5 kg respectively. Across all age and weight classes, Moorhead achieved national records in the squat, at 508 lb. or 230.5 kg, and in the military press, at 254 lb. or 115 kg. The military press is like a bench press only standing up and lifting the weight overhead.

As a sport, powerlifting is increasingly popular. Ally DeWolfe was one of the event’s organisers and she explained The Iron Challenge attracted 40 competitors, some of whom travelled from as far away as Drayton Valley, Alta. – a distance of nearly 600 kilometres.

Most athletes were from Medicine Hat, Lethbridge and Calgary. The youngest competitor was 10 and the oldest 67.

DeWolfe explained the 100% Raw Powerlifting Federation is newer, but taking the powerlifting world by storm.

Both Moorhead and Frey complimented the event organisers for putting on a high-quality event.