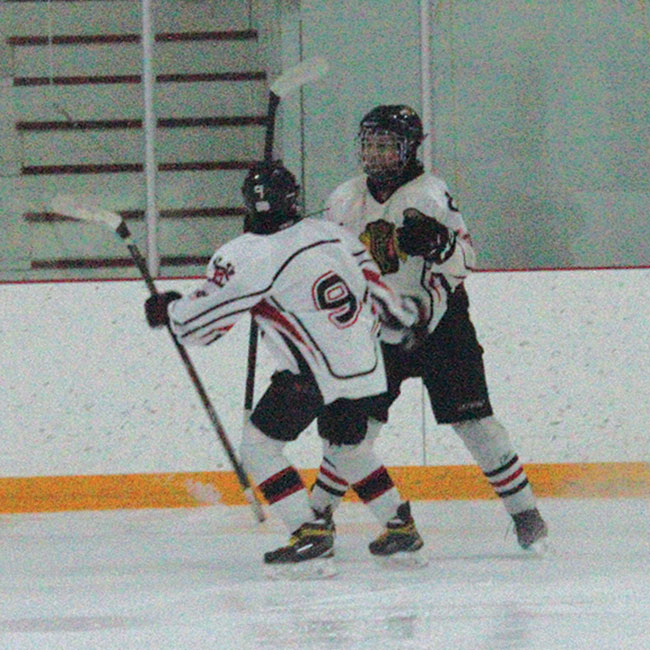 The Maple Creek bantam Hawks are off to the final round of the 2017 playoffs after defeating the Swift Current Eliminators in two games.

Heading into the championship series, Maple Creek has won 15 straight games, dating back to Jan. 5.

The Hawks have “really bought into the system,” according to coach Bryce Weiss.  “They’re playing well and we’re getting good goaltending. They have a goal in mind for the end of the year here and hopefully they can achieve it.”

The first game of the series was held in Maple Creek on March 8, where the Hawks were able to squeak out a 2-1 victory.

Through the first two periods only one goal was scored and it came off the stick of Swift Current’s Austin Klimm nearing the end of the first.

Both goaltenders, Bayne Wilson for the Hawks and Chase Coward for the Eliminators, held down their teams’ forts through the second and first half of the third.

With about 13 minutes left in the third period Maple Creek’s Trevor Brost took a two-minute penalty after hitting Swift Current’s Nolan Billows in the corner. Billows had to be helped off the ice and did not return. There was said to be no serious injury as a result of the play.

During the penalty kill, the Hawks were able to tie things up shorthanded, after Maple Creek’s Wacey Watson put a backhand shot past Coward.

The game seemed destined for overtime, but with just eight seconds left in the game Chase Sawchuk scored his eighth of the playoffs, putting the Hawks up 2-1.

The Eliminators coaching staff was upset following the goal as they believed the play leading up to the eventual game-winner was offside.

“I think it was the referees that robbed us of the game. I think it probably should have gone into overtime and anything can happen there,” said Eliminators coach Steve Billows.

Despite the visiting team’s protest, the referees determined it was a good goal, and the game wrapped up with the Hawks winning 2-1.

The team then made the trip to Swift Current for Game Two where the Hawks wrapped up the second round with a 6-2 victory.

“They’re very excited,” Weiss said. “They see their goal ahead. It’s been a grind and they want it now.”

The team has been playing as a unit, which has helped them be as successful they have been, Weiss added.

“The team has earned it,” he said. “We get contributions from the whole team, which is pretty cool.”

Frustration began boiling over towards the end of the second game for the Eliminators.

The second game “was probably our worst game of the year,” said Steve Billows. “I think the players were frustrated from Game One because they felt robbed. Maybe that frustration fell into the next game, I don’t know what happened.”

Despite that, Steve Billows wished nothing but the best for Maple Creek as the Hawks head into the finals.

The bantam Hawks will battle either the regular season champion Wood River or the Swift Current Capitals in the upcoming series.

Keep an eye on Maple Creek News’ Facebook page to  find out when Round Three begins.