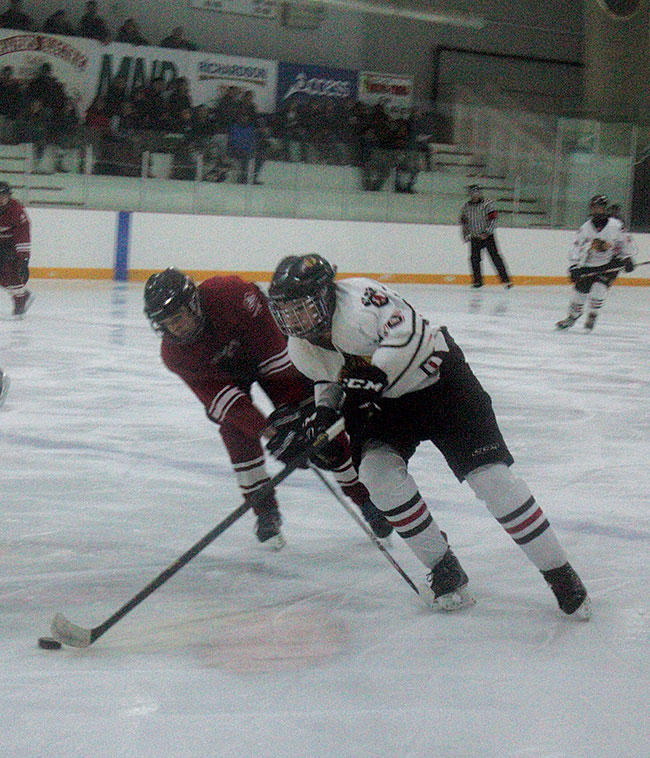 Maple Creek's Wacey Watson blows by Wood River defender Travis Montan before firing the puck past goaltender Ryley Gross in Game One of the league finals. Maple Creek would go on to win the game 5-3, but would lose the next two games, eventually falling two games to one in the series. SPORTS PHOTO SEAN MCINTOSH

It was as close as a series gets, as Maple Creek fell in the third and deciding game on March 22 in Wood River.

The Hawks were able to open the series with a 5-3 win at home in Game One on March 16.

“The series was very emotional and grinding,” Hawks coach Bryce Weiss said. “We played very well … and our boys exceeded expectations with them as young as they are.”

Wood River’s team was a much older group compared to the Hawks, as they had 11 second-year bantam players, while Maple Creek had just three.

After winning Game One on home ice,  the Hawks just couldn’t beat Wood River on the road, despite putting up a great fight in both games.

“A lot of guys stepped up and played really well,” he said. “We had a fabulous run, but [Wood River] is a pretty well polished team and we just ran right out of gas. It’s been a grind.”

The Hawks were without three major players in the final series – Zach Briggs, Logan Eng and goaltender Bayne Wilson – as they were all suspended in the series before.

With a few players out, the bench was looking pretty short, so players had to play 30-plus minutes every game.

“I’m very proud of [the team] for what they achieved. There were some factors against them, but they’ve overcome lots,” Weiss said.

With Wilson’s suspension, Maple Creek had to lean on first-year bantam William Knight in net, who hadn’t played a league game this season.

“He did a fabulous job filling in. He never played a game this winter so we kind of threw him to the wolves, but he stepped up,” he said.

On the other side of the ice, Wood River’s squad couldn’t have been more excited after being named league champs, according to coach Rene Bouffard.

“We’re really happy and very proud of the kids,” he said.

Wood River went on to play in the D Division bantam championships against Macklin. Based on the games against Macklin, Bouffard says Maple Creek was a tougher challenge.

“For a young team like that to make it to the finals is quite the accomplishment,” said Bouffard. “They were very tough on the puck and a fast skating team. They’re going to be a really tough team to contend with next year.”

Weiss had similar sentiments as Bouffard, saying Maple Creek could be the team to beat next season.

“We’re in good shape going into next year. There’s a strong core of pee wees coming into the bantam division, plus these first years definitely can carry the load,” Weiss said.

Maple Creek finished second in the regular season with 20 wins and seven losses.

“They set a goal last fall and they nearly achieved it. They’ve improved so much and bought into their systems and became good little hockey players. As a coach that’s the rewarding part,” said Weiss.