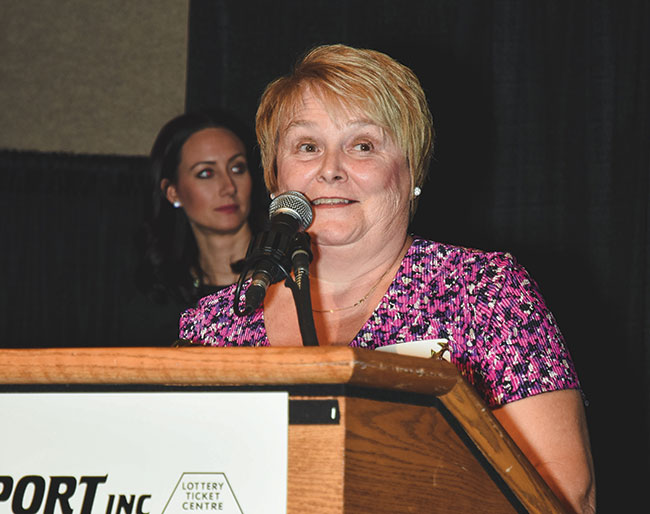 A woman from Leader recieved some recognition for her volunteer work in sports.

Carla Laevens received the volunteer award at the Saskatchewan Sport Awards March 23 for all her work as a skating evaluator.

For the past 25 years, Laevens has evaluated and judged various skating competitions all across the province. In addition to that, she has been a member of Skate Canada Saskatchewan’s board of directors for 16 years.

“Volunteering for me is just a way of life,” she said.

Laevens says she didn’t expect to receive the award.

“I was very proud,” Laevens said. “I was pretty shocked because I didn’t even know I was nominated.”

After the years of work with skaters, receiving this award meant a lot to her.

“It’s nice to be recognized because there’s days you’re volunteering where you think ‘Gosh, why am I doing this?'” she said with a laugh.

Laevens has served as the skate development chairperson and has chaperoned a number of events, such as  the Skate Canada Challenge, which is a Canadian qualifier.

Saskatchewan’s development team has 30 younger children, while there are 40 skaters on the competitive high performance team, which Laevens works to develop into even better performers.

Having a hand in training the young skaters of Saskatchewan is what her volunteering is all about, she added.

“It’s so exciting to be a part of a journey where you see these young kids at a tender age and end up standing on the podium … It’s very rewarding when you see them excel and be the best they can be.”

Being able to represent Leader for the awards is something she’s very proud of, she said. Hopefully her award can help bring some more eyes onto skating.

“It could give our little town a boost,” she said. “We have a really healthy club and having somebody in the paper now and then or getting an award down at the rink it helps boost the enrollment in a small town.”

The ceremony in Saskatoon on March 23 was a great experience, she added.

“I was really quite impressed … It was very tastefully done and well organized.”

Being able to represent volunteers is something that makes her proud, she said, because volunteers are needed in a town like Leader.

Volunteers are “really what glues our small town communities together – whether you’re building a hospital, a swimming pool, or a rink you have to rely on volunteers.”