A rough start to season for Red Sox 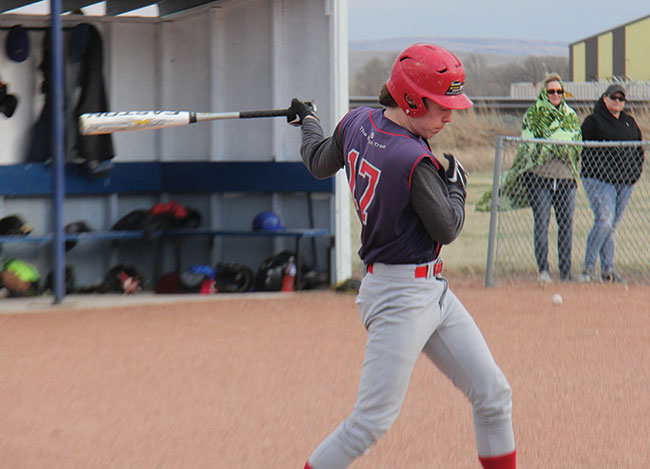 Justice Smith takes a swing while at bat late in the game on April 13. Smith struck out at this time at bat, with one strike against him being a fly ball. SPORTS PHOTO MEGAN ROTH

The Maple Creek Composite School Red Sox have begun their season on a less than stellar note.

With three games already under their belt, the high school baseball team has yet to win.

The Red Sox faced the Brooks Buffalos in the home opener on April 13.

While the loss is a hard hit for the team, coach Jack Cameron says he has already seen an improvement in the team.

“It was the same last year, we are just slow to start,” Cameron explained.

In three games, the Red Sox have improved, which could be seen in the first home game.

The weekend before, April 8, the Red Sox played a double header against the Eagle Butte Talons.

Cameron described the games as terrible.

The improvement of one week is particularly great in Cameron’s eyes who ranked the team’s playing in the home opener at a two out of 10.

Maple Creek started on the strong side earning two runs in the first inning to the Buffalos one.

While the Red Sox were able to make it to base a few times in the following innings they were unable to bring anyone home.

“We just couldn’t get to base.”

Over the next five innings, the Red Sox made it to base a total of six times.

The Buffalos had good pitching, with few walks during the game, though Cameron said it wasn’t outstanding.

“They had good pitching, not great but good,” Cameron said.

The Red Sox did work hard throughout the game. Their pitching was pretty good – at least better from the week previous against Eagle Butte.

Most of the pitches were solid and clean down the pipe.

“We had very few walks this game, so we are improving.”

The team will have much to work on throughout the season, such as power behind throws, being faster on their feet and watching the ball when at bat.

The goal for the team this year is to move on to provincials.

The league takes the top 16 teams to the provincial tournament at the end of the season.

In the Southern Alberta High School Baseball League there are roughly 20 teams.

“It shouldn’t be too hard really. We only have to beat three teams to make it there,” Cameron said.

Cameron hopes the team will use the home games at the end of the season to their advantage to pull ahead.

The Red Sox will play their next home game against the Crescent Heights Vikings April 26 with the first pitch at 5:30 p.m.